…because they’re just noisemakers (which most people don’t hear anyway since we’ve muted the app and listen to Spotify), or take up valuable space.

The idea of SCROLLING to find a button breaks human interface standards. You should be able to see every button you need, or it shouldn’t be there.

SHRINK the Stop and U-Turn buttons - they’re already too easy to accidentally press and there’s no need for them to be HUGE. (and make the “STOP” a universal octagonal stop sign for clarity - admittedly, this might confuse people thinking it “stops” their bike - leaving it as a square is fine, but at least shrink it)

Move the “turn” buttons (when reaching a junction) so they pop-up on the map just like they do on the main app screen to avoid the same dreaded “scroll left/right” for the buttons at the bottom. (strongly suggest “press-and-hold” to avoid accidentally turning off route - perhaps even an “are you sure?” if on a route you haven’t completed yet)

Make the camera selection button do the same thing as the one in the actual app - at least one view is missing (helicopter?) when cycling cameras via the Companion.

Collapse the HUD & graph buttons, make them a “progressive HUD toggle” - the main game shouldn’t give you a warning about toggling the HUD if you’ve tapped the Companion button, it should just do it. One tap to disable the graph, next tap disables entire HUD, next tap reenables everything. EDIT - OK, you can disable the HUD warning! (tiny checkbox to the left of the warning - and it persists through game sessions - neat!)

FINALLY - if you really, REALLY don’t agree with deleting all these buttons or expect a flurry of complaints: give us the OPTION of toggling buttons on/off in the Companion app preferences.

EDIT - added current state with some more buttons I’d forgotten, and proposed UI. Surely Zwift HQ, you can agree the proposal is just better? We love the game but can you please give us some indication the Companion App UI is on your radar? 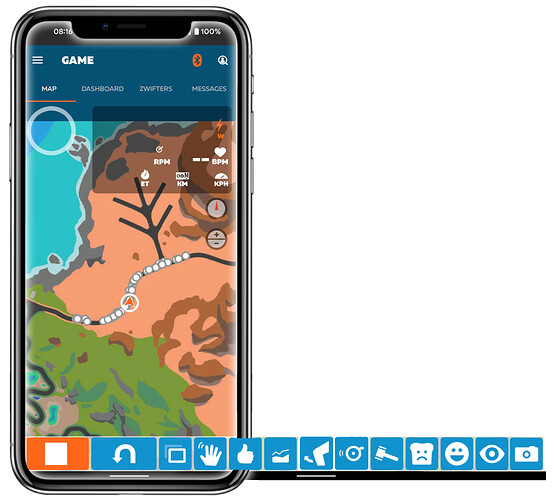 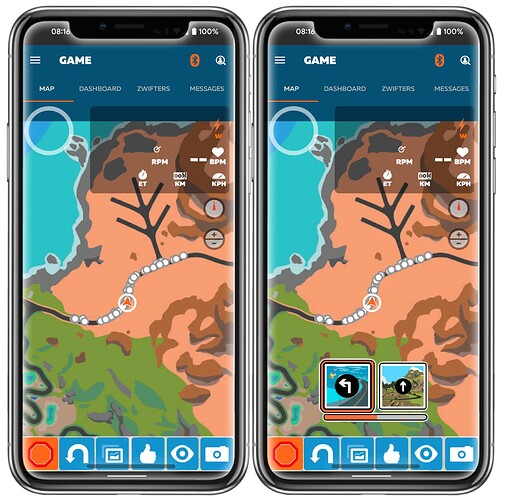 This will be nice if Zwift could replace the buttons and shortcut keys with more useful actions. Like the ride on button that only say “Ride On” could actually give multiple ride on’s like the white circle on the map then we can also use the F3 Keyboard button to do the same.

Actually, I don’t mind the handwave and elbow-flick buttons - I’ve used those to decent effect in TTT races when we had a discord failure.
But they don’t make noise, and can actually communicate with other riders. It drives me nuts that those disappear when you get a powerup.

The U-turn and stop buttons - take them off that bottom screen and put them somewhere else. I’ve had enough sweat drops trigger power-ups accidentally, and the greatest sweat drop in the history of Zwift left me waving as I passed someone in a sprint at the line, but I’ve luckily never ended a ride or done a u-turn accidentally in a race.

Great feedback! How often is that bell used? Same with the hammer and toast. I’m level 50 and I don’t even know what the smiley face is for…

Some racers will probably want to keep the elbow flick.

I have also heard reports of accidental activation of the u-turn, so perhaps the stop and u-turn buttons are hidden so it’s necessary to scroll right to access them, or they’re moved somewhere else.

A single massive improvement would be to re-map the thumb to deliver a ride-on bomb.
Remove the audible “Ride on!”. Get rid of the white circle.

And while we’re at it, please stop randomly spinning the location arrow.

The elbow and wave are nice.

You have to hold the U-turn for some time to activate.

It would definitely help to simplify the UI, and especially to eliminate the confusion between the thumbs-up button and giving ride ons. Pretty much every new user is confused by that. The vocal buttons are the #1 reason to turn off game sounds. I will have game sounds disabled indefinitely, until that garbage is removed.

(Looks like we lost all the votes from the previous thread for this topic.)

(Looks like we lost all the votes from the previous thread for this topic.)

Currently you have to scroll left to access both the stop and u-turn buttons. Not sure if the u-turn button goes back to being hidden after you use it but initially it is and, as Gerrie mentioned, it has to be held down for a while to activate.

it sin’t for me, the buttons show stop to the very left when in map view with u-turn next to it

Android? I’m on an iPhone and by default the stop/u-turn are hidden.

Since creating the initial thread and the mockup, another idea occurred to me.

Make the map HALF the size it is now, reserve the entire bottom half of the screen as a “console” of sorts, basically the virtual equivalent of a Stream Deck controller people have been building themselves.

Zwifting Stream Deck Profile What is this? This tool allows fellow Zwifters to streamline interface interactions in Zwift by providing a pre-configured tactile button interface with customized icons and layout. The installation is clean, doesn’t require the companion app, or a keyboard. It sits wi…

Offer a toggle in settings for “basic” versus “advanced” mode. In the former, you get default buttons. In advanced mode, you can edit, much like you can on Android when configuring buttons to appear on the swipe down panel, or on various popup keyboards. (GBoard, Microsoft SwiftKey etc) Alternately, just make advanced the default - people can leave buttons alone or edit as they see fit.

I’d also like the map to behave similarly to the mini-map in game: tapping it zooms but there’s an orthographic mode that angles it to look ahead slightly.

The Bell and Toast can easily disappear. I would not miss them.
The Wave is rather innocent though and one I use on occasion.
As for the Elbow, then I would really be unhappy to see that go. It is used a lot in breakaways etc.

Exactly, keep the wave and the elbow, remove bell, hammer and toast altogether, and make the thumbs up do something useful instead (e.g. return all rides-on received in the last 30 seconds).

Some more buttons thoughts - in a workout, the “skip” or “>” button could do with protecting (like make it press-and-hold). It’s too easy to hit it accidentally and mess up a workout. I’d quite like a “back” or “<” button too in a workout to repeat something.

Some of the Pro team workouts running this week suggest adding an extra interval to make them harder, so being able to repeat something would be great. It would need to work inside a multi-interval block though, where hitting “back” when on interval 4 or a 5-interval over/under step just moves you back to interval 3, not back to the step before interval 1.

Lately I’ve had the companion app showing two elbow buttons during a workout, no wave button and no “ride on” button either.

Sweat on the phones screen can hold it down

I had that happen once or twice.

On the bottom of the Companion App there are 6 buttons showing in the default view. 5 of those buttons control things riders could “yell out” which no one really uses. 1 button hides the data that fills up the screen (important) and changes the route (same button). If you are hiding data on the screen precisely when the button changes to route change button it is really, really annoying. And after such a thing has happened you are left looking at those other five buttons that basically no one even uses. Can the route change button cover over the toast button instead of the hide data button at least? Please?

These concerns have been raised at ZHQ. We’re looking into a cleanup / consolidation of the UI buttons.

can you ask them to add gradient to it too - it is a glaring omission and would solve the unusable gradient graph in game.

Move the “turn” buttons (when reaching a junction) so they pop-up on the map just like they do on the main app screen to avoid the same dreaded “scroll left/right” for the buttons at the bottom. (strongly suggest “press-and-hold” to avoid accidentally turning off route - perhaps even an “are you sure?” if on a route you haven’t completed yet)

One minor thought on this particular suggestion. Press and hold can be a bit of a pain when grossly sweaty on a spirited free ride if it’s too long of a hold (sometimes I cant get a ride on drop to work, or stop a ride in companion). I like the idea of re-positioning them a lot though.

(or ahem allowing me to select with an aggressive steerzo move like holding a harder than average turn position or something).