(I’ve been experiencing this issue for over a year, I figured someone must have raised it and Zwift would fix it, but it still continues, so I’m reporting it. I don’t see anything in “known issues” but apologies if this has already been reported)

Zwift uses “indicators” (US: turn signals) that flash at the rear of your bike, to show which direction your rider will take at the next upcoming junction. Normally these display as arrows/chevrons (correct). Sometimes (I’m not sure under what conditions) the indicators/turn signals instead flash as oversize single giant pizels like your entire screen is running in a super low resolution.

I’m currently on an Apple iPad Pro (iPadOS/iOS). Both ipad and Zwift are at latest verison, but I’ve been getting this bug across multiple versions and multiple Zwift builds/versions for over a year now.

Image attached showing the problem. Please can you fix this? 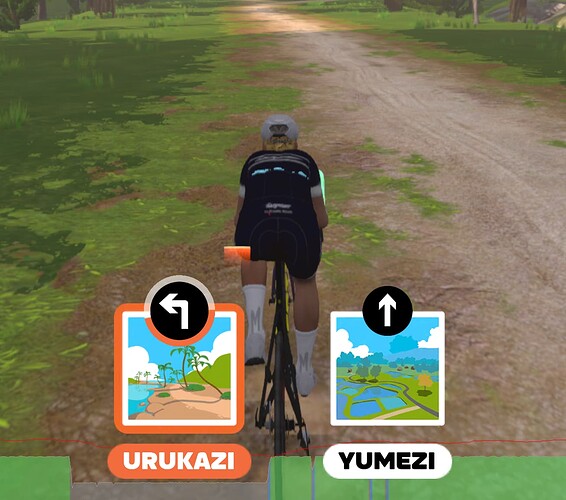 I’d like to understand the issue with this one, also. (It affects the tail light, also.) It’s not a huge thing, and is very intermittent, but I would think there has to be some way to make it work all the time.

I’ve not been able to establish any kind of pattern yet despite how often it occurs, its not even consistent throughout the course of a ride (it was like this for a bit, then seemed to fix itself later on). My problem is that I’m almost always using Zwift for workouts so my mind is a bit focused on that generally and not debugging Zwift for them

I wonder how common this one is, is it a known issue? I couldn’t find reference to it anywhere (might be me not searching for correct term) but given how often it happens for me I’d be astonished if it wasn’t happening to loads more people.

I’m pretty sure I’ve seen comments on this elsewhere, but it’s clearly pretty low on the priority list. I am not even sure how ‘cross platform’ it is, or if, for example, it only affects Apple products.

Occasionally affects Windows too. Someone mentioned it the other day.

Weird. I’m on iPad Pro as well, and haven’t noticed this before, will keep an eye out to see if I ever get it.

Weird. I’m on iPad Pro as well, and haven’t noticed this before, will keep an eye out to see if I ever get it.

This is my suspicion with most Zwift bugs, that for every one that I report there’s generally hundreds of people that have had the same bug but haven’t reported it, and thousands who have encountered the bug simply not noticed. I do 50,000km/year in Zwift so I definitely give the platform a good run for its money and likely both encounter more bugs than many and also find them more irritating since I use the platform so regularly.

@shooj since this has screenshotted evidence and confirmation from multiple users can we get this logged as a bug please?

Windows PC (not mine) the other day: 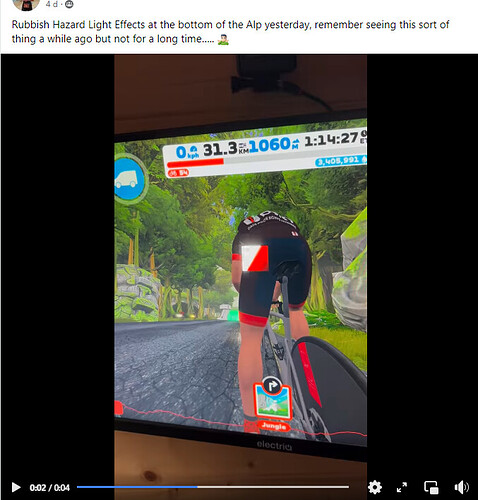 Thanks for the independent corroboration @Dave_ZPCMR - this supports my point too, people are experiencing this, but just not bothering to report it. Hopefully with multiple screenshots from multiple users showing the same issue on multiple platforms this will get some attention… Zwift… ?

UPDATE: I don’t know if there’s any possible link but I did find a previous bug report about pixelation (Blocky looking rendering of dust and water [July 2022] [1.27]) - not of indicators in that instance but just posting here in case there is any link at all when this does get investigated.

I’ve seen the current bug on macOS as well. Not all the time.

Thanks @Paul_Southworth that’s really useful, helps us to determine if all platforms are affected - definitely sounds like it given we have reports now of this on iPadOS, MacOS and Windows.

So I have some more information on this after today’s ride, which hopefully might let Zwift get to the bottom of this (if anyone ever picks up this issue - are you out there @shooj ???

Extra info I gathered today (screenshots further down to evidence each of these - apologies for low resolution, I have higher resolution copies if needed):

Come on Zwift support, where are you?! 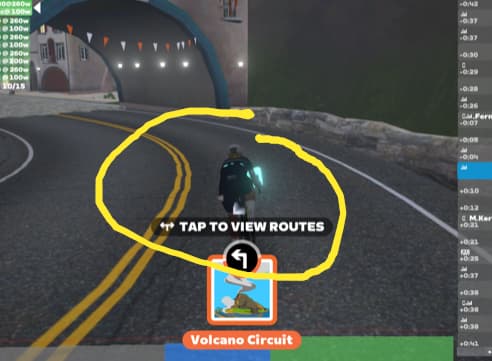 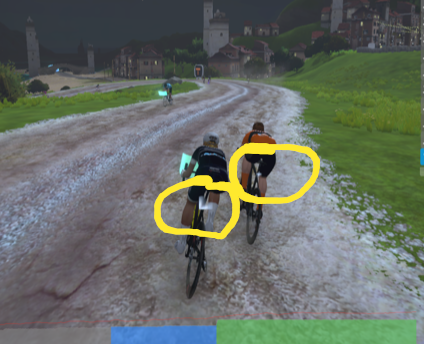 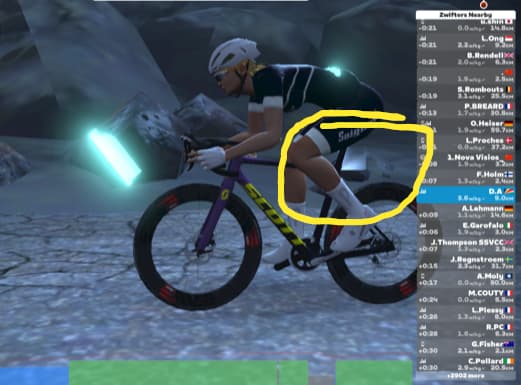 Come on Zwift support, where are you?!

If the IT department of the $1bn-value Zwift consisted of a grand total of one employee who single-handedly logs all support tickets and then writes, tests and releases all the code…that comment would almost make sense

But I’ll take the free thread-bump, thank you

I got something similar to this today (windows) but the affected area was much bigger, a square about the size of my avatar flashed on screen at a turning

Hey @Chris_Holton thanks for the info. Does it look more like this one? Blocky looking rendering of dust and water [July 2022] [1.27]

I did post that link in one of my posts above, and do wonder if the two issues are linked/the same basic problem, but obviously its just guesswork!

Fair enough, just thought it was worth checking, thanks for the info, every bit of data should help when they do get round to looking at this one, hopefully

this might be just a “me” thing - I use a mini PC with internal graphics so it is likely to have the odd graphical anomaly from time to time but thought i’d mention it in case other see similar.