Today, the Zwift App crashed for me several minutes after an Event (race) started (PC/Windows). Has anyone else seen this happening this week? I submitted a support ticket by email & I am interested in seeing how often this is happening to others. Let me know with a post below!

This happened during ZwiftPower - Login (and the event results look a little odd, so maybe it happened to everyone in that event?).

In the pen prior to the start of this event, several riders mentioned seeing this happen the day before and wondered if it was related to the recent update (Mar 9, I believe); I don’t know the rider names or event details. Later in the day, a friend saw the same thing while trying to do a race.

Here are the final lines from the log file for the failed in-event ride, in case anyone can interpret what happened…

My initial thinking is that it was a very big event and the device could not handle all the processing. But we need to know more about your system.

Hi Gerry,
Thank you for the quick reply

It was actually quite a small event…who knew, not so many want to ‘race’ the Three Sisters!

I do notice that there are no results on Zwift Power… Very odd. I have had a few crashes recently when joining an event, but not when actually in an event.

I also had crash today. Racing in 3r Race - 3laps of volcano flat race at 5.05 am gmt and as I went through the lap banner after lap 1, zwift closed down. Looking at zwift power this seemed to happen to everyone apart from 4 riders in catogary c

Are you using a Windows PC to run Zwift? 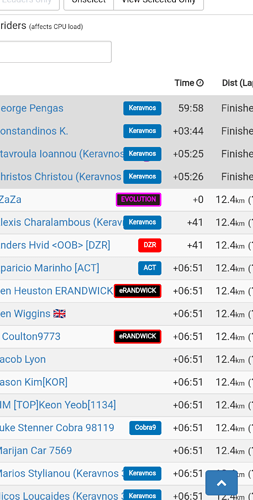 Thanks. I think there’s a wider issue going on, that’s why I ask.

This happened to me during a 3/11/22 4:05 PM CST 3R 50k Volcano Flat Race. Right as the pack crossed under the arch after the 1st lap of 4, Zwift fully crashed, and it seems to have done so for 67 of the 70 racers since Zwiftpower shows them all at the same time and distance. I posted on reddit and a few others have mentioned experiencing something similar. I am running Windows 11 but one of other racers was my brother and he was running Zwift on a MacBook Pro from a few years ago (unsure of OS version). Also, Zwift did not save any of the activity - it gives me a “Activity details cannot be loaded” error.

Hopefully, Zwift can figure out the issue quickly because I’m unsure of doing any other races or events if they don’t save my training info.

Thanks @Ben_Wiggins5124 ! Sounds like a lot of us are having this problem

Hi @strikeir13! Thanks for posting. I also see the empty/unloadable fit file for the crashed activity. Agree, this is important to fix! (I was on PC/Win10, but a friend was using an iPad, so that is additional evidence that it is not platform specific.)

I have had 2 crashes in different races on 2 pcs.
Not big events either.
Only just started happening after latest update. Never had a problem for over a year.

I try to restart PC and join another race, but start on click join with this same error.

I was in that 3R Three Sisters Hilly Race that crashed. I’ve been racing in Zwift for two years and it’s never crashed until yesterday. I jumped in another race a half-hour later that finished without any issues.

Thanks @Mike_Monterusso ! So glad a different event worked well for you & those are interesting data points, that it worked fine ‘in event’ shortly after the in-event crash & that Zwiftalyzer called it “crowded”. Do you know if that means the world was “crowded” vs the event was “crowded”? I remember seeing 78 (not crowded, especially compared to Tour de Zwift/Tour of Watopia), but I don’t know if that was 78 in my category or 78 total.

@Andreas_Traff - thank you for posting!

That’s brutal @Andrewwojownik … thank you for sharing that to help elevate the issue!