This is one thing that frustrates me with the new design where it should have been changed but it wasn’t. I could understand why it wasn’t in the old design as there wasn’t the room to put the route on the upcoming events, but the new much larger tiles have loads of empty white space and could easily fit in a lot more information, like so: 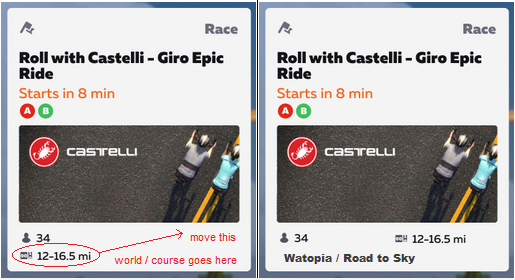 Yup, exactly what I said when I first saw it. All that white space and a fundamental piece of info isn’t shown. It’s baffling.

Delete the event image and add the missing information.

We abandoned drawers long ago, just not good.

The new home screen for me only makes changing a bike faster, everything else is not easier.

I hate that it is wasting space trying to show me routes on Zwift that I’m not interested in, or more to the point cannot use at the moment due to my recovery from major surgery. If I could “pin” one route as default it would save me time.

Also, workouts, I would love to collapse those into a single icon or even remove them from the Home Screen and then add them back later if I want them.

In our place, personalisation for our users is a big thing - so they can do what they want to do faster.

Draws is a verb.

It would be nice if we could “favorite” or pin any tile. They should always be displayed unless we decide to unpin them.

EDIT: This can only apply to tiles that don’t change very often

I don’t really get this either, why not have the last route you chose on each of the worlds available that day. that would actually be better than the old home screen. If it displayed all three last ridden routes you could just click on the one you want and go straight to the game in one click.

The new UI slows down and then grinds to a halt on my iPhone SE (A9 chip) after just a few button taps or swipes. Once that happens, I have to shut down the app and restart it. (I connect the phone to a TV via an HDMI cable.)

In order to actually get a ride, I have to use a bare minimum of taps / swipes to get to a ‘Ride’ button, and even then the ‘Z’ animation runs at about 0.1 fps (that’s 1 frame every 10 seconds!). I have to wait sometimes a minute or so before the game proper actually loads, at which point the game runs smoothly and I can ride normally.

This did not happen with the old UI.

This thread will update progress for Zwift’s new home screen for May 2022. Please see the previous discussion for April here. Who: iOS and Android users. As with the initial rollout on Windows and Mac - we’re intentionally rolling out to a small group of iOS and Android users and asking for your …

OK, I have done now, thanks.

I’m on Apple TV still got old UI. Should I have new one by now?

No, Paul. It hasn’t been released on that platform yet.

Hi, sorry if this has been asked and answered before…
On the old home screen you could sign up to join group rides that had already started. So if you logged in at 10:33 and had not signed up for any ride on the companion app, but saw a ride that started at 10:30 you could sign up to join from the home screen. Now I do not see a way to do that when I go to the events tab. I just see rides starting in the next 60 minutes and nothing that has already started. Sorry if I’m missing it and I appreciate any insight into where this feature now is. Thanks!

It still shows rides that have already started. Perhaps the ones you saw had no late join option?

Overall I am fairly ambivalent about the new interface but do lean slightly more positive.

The only concern I have is the rout selection screen. I really miss having the mini map on screen all the time. I really miss being able to go from one route selection to another with a single click.

Now we click on a route then the map pops up and we have to click off the map before clicking on the next route. It is minor but very annoying.

Is there any plans to hashed this homescreen on iOS for iPad?

@robert_barber
Absolutely. iOS / Apple TV / Android will all get the new home screen.

2022? 2023? ATV probably needed the new UI the most and yet gets it last. Drives me mad trying to select a workout or pacer bot every time. That’s assuming the new
uI will resolve the issues selecting anything from a list. And before anyone says it’s the remote. It’s not. All other apps nwork fine with the remote.

Down to about 5fps on the selection swipe in. It’s certainly directly related to Noesis, because the same jerky performance is now seen on the reskinned
in-game settings menu, even when the game is running perfectly in the background. All the other menu options in the original style such as the garage are as smooth as normal.

When can we expect improvements? When are the missing features being added back? This stuff has been reported from the very beginning, six months ago. Why ask for user feedback if it isn’t going to be addressed?