I have the KICKR CORE. Whenever I use ERG mode during Zwift workouts, Zwift randomly (about once every minute or two) drops from eg 275 watts to 230 watts for about a second or two, asking me for “more power”, then returns back to 275 watts. I feel no change in resistance. It does not happen when ERG is below around 160-180 watts.

I use latest firmware on the Core, have turned all other devices off (iPad, iPhone, Garmin Edge 830), connect to MacBook Pro M1 via Bluetooth and have a strong wifi signal. According to zwiftalizer I have no Bluetooth dropouts.

Same problem if I use iPad instead of MacBook Pro.

When I record the workout with my Garmin Edge 830 (via ANT+) I can see there is also spikes with drops in power using ERG.

I have reached out to Wahoo support. Among other things they asked me to do a ERG workout with the Wahoo app., which shows no drops in power. So they conclude that nothing is wrong with the KICKR CORE.

Any suggestions would be very much appreciated. 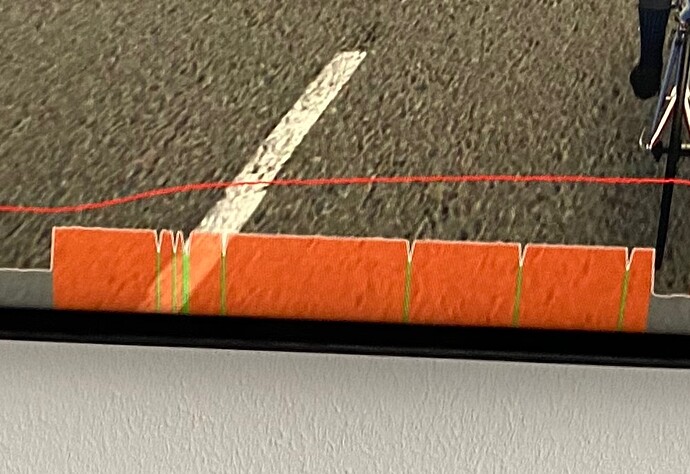 Hi @HNR, welcome to the forums. I also have a Kickr Core, but I use windows and ant+ to connect. I wonder if you have tried ANT+ with your MacBook? It seems like something is interfering? How did you connect to the Wahoo app to do their test?

Thanks Mike, I do not have a ANT+ dongle, but as the Wahoo app on my iPhone was connected to the KICK CORE by bluetooth I guess bluetooth connection is not the problem. Or could I be wrong?

@HNR You should drop your log file from the guilty ride (Mac) onto Zwiftalizer.com. You may find that insightful regarding your BT environment. If you aren’t sure how to read the analysis, post a link here and people can interpret (though its fairly well explained).

@Dean Thank you very much for helping.

The Zwiftalizer shows no bluetooth dropouts, but there might be data that I do not read correctly. I have created a link to my latest workout analysis from Zwiftalizer, but I’m told “Sorry, you can’t include links in your posts.”, so I do not know how to share the analysis?

It seems like you’ve had some good suggestions all around. In my experience, power drops are generally attributed to wireless signal interference. You can find related troubleshooting in this article.

That said, it’s odd that the power drops only happen at higher watts (e.g. 275+ watts) but not at lower watts. How strenuously did you test this on the Wahoo app? Did you do a full workout? Did you try a workout in ERG mode on another cycling app to see if your KICKR exhibits the same behavior? Just curious if this phenomenon is truly isolated to Zwift or not. Thanks!

Hi @Steven_D - thank you. I have tried all sorts of things to rule out signal interference and bluetooth problems directed by the Wahoo Support. But they ended up saying that I can not use Zwift Companion app while working out, which I think is odd. And powering off my iPhone (and thus not using the Companion app) makes no difference.

The wahoo app test was done this way (per instruction from Wahoo Support):

I did not try a workout in another cycling app. But you are right, I should do that. Can you suggest one (preferably with a free trial)?

so I do not know how to share the analysis

After you hit the share button in Zwiftalizer, you could post it with a few gaps in the link, eg:
https ://zwiftalizer. com / public /123456789etc

Great that it shows no drops but makes this more curious!

Regarding Steven’s suggestion - Trainerroad has a 30day money back deal and can do custom workouts it appears.

Another thing to try is if you have access to a Garmin device or similar (head unit or watch) you can dual record a workout (using ANT on the Garmin, while Zwift is using BT). Comparing power charts would be the aim of this.

The first interval of my workout today was 8 minutes @ 235 watts. The power dropped 16 times (!) to around 176 watts (each time for 1 to 3 seconds), every time Zwift was telling me “more power”. This is annoying even though I feel no change I resistence.

I will try one of the other cycling apps sometime soon.

Interesting Zwiftalizer output in that it’s clean as a whistle. The UDP drops look to be when you had finished the ride so they arent a problem if this was the case. Otherwise UDP drops aren’t healthy as that is live data.

If it were me, I’d do another short workout where you know you can replicate this, and:

One other thing, was the Wahoo tests done with ERG on or just normal riding trying to hit those targets you mention? Asking as the forums periodically have posts mentioning ERG power doing weird things but normal rides dont.

Keen to hear how you get on with another app.

I did try Rouvy today (14 days free trial) and the problem is the same. Random power drops. I guess this rules out that it is a Zwift problem.

After that I tried to do another ERG workout in the Wahoo app @240 watts for 5 minutes (and yes the first Wahoo test was also done with ERG). This time it dropped the power - but “only” two times, and “only” to 219 and 214 watts.

I have written to Wahoo Support again, including the fit file, and are waiting for their response.

Will write an update in here. Thanks once more for helping me with this matter.

Update: I got this answer from Wahoo Support:

“The ERG testing file you sent to us displayed no issues with the hardware of the trainer.”

FWIW: the fit file from my latest ERG testing using the Wahoo App looks like this when imported into Garmin Connect: 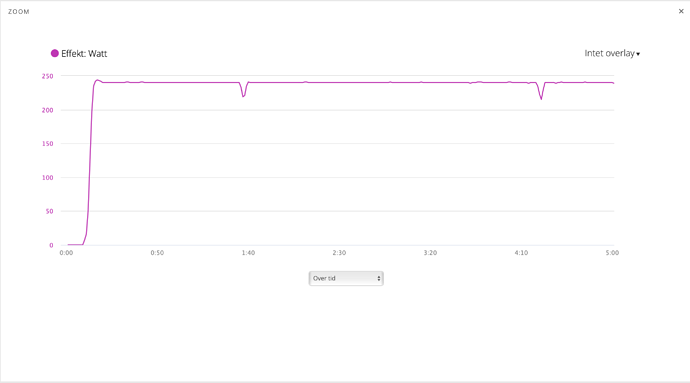 Any suggestions are more than welcome! Logically I must have missed something?

What are chances that if I buy a ANT+ dongle that it will solve the problem?
And what are chances if I buy a new trainer (eg a Tacx Neo 2t)? My KICKR CORE are still under warranty, so perhaps I can sell it (if I choose to trust Wahoo Support).

An ANT+ dongle will only set you back $30 or so (much less than a new trainer), also make sure to get an extension USB cable with it so it can rest right under your Kickr Core. If that doesn’t help, I would go back to Wahoo and keep working with their support and ask them to replace it.

I bought an ANT+ dongle, placed it right under the KICKR CORE, but the problem is exactly the same.

I wrote this to Wahoo Support, but they just stated again that there is no problem with the trainer. They do not comment on the facts that the problem occurs no matter if I use bluetooth, ANT+, MacBook, iPad, iPhone, Zwift, Rouvy or Wahoo App. They just reply that the fit file shows there is no hardware problem (can it be a bot?).

I have now once again reached out to the retailer from where I bought the KICKR CORE, as it is still under warranty.

Thanks for trying to help me with this problem.

I’m experiencing what seems to be a very similar issue. It started a few weeks ago that ERG mode would just sort of stop working during a ride and I had to toggle it off and on again. Has been happening with all workouts, including a Ramp Test where it dropped my power significantly right at the last interval I could manage! Using a KICKR Core and Zwift on macOS.

Hey Teddy - drop your log file onto zwiftalizer and post up a share link - your ramp test shows complete power and cadence drop so that’s a little different to the OP (he was getting very small power drops). But lets start with Zwiftalizer and to see if we can rule out sensor drops.

Hi @Dean, thanks for your help!

Here’s the Zwiftalizer from my Ramp Test, and here’s another from an activity called Ironman 70.3 Powerups in Watopia. You can see how frequent the power drops were in that activity as well:

Both are clean as a whistle. OK, it does seem very much the same as @HNR and he proved it occurred outside of Zwift also, meaning it’s very likely the Kickr. I had a look at his actual fit files and the drop was only a small number of watts, but they may be irrelevant.

I have nothing new to suggest from what was done above so try logging this with the Zwift support team to so they can check from their end for any weirdness. And also worth try to replicate outside of Zwift, and if you do, hit up Wahoo also.

@hnr - did you get anywhere with the retailer?

@hnr - did you get anywhere with the retailer?

Not yet - I’m still waiting for their reply.

Teddy’s problem actually does seem very much the same as mine.

N HNR: I am having the same issue and have the Tacx Neo 2T. I’m at a loss as well.