I can no longer use Zwift on the computer I purchased specifically for Zwift. I have not checked my laptop yet. I am assuming it will not work there either.

For this to be the case, both your PC and laptop would have to be over ten years old. Upgrading the PC is almost certainly possible. If not, £60 is enough to buy a new one.

Well neither one is that old. I purchased my computer based on Zwift specs from two years ago. I just don’t see the purpose of a graphics card lock out when this program does not seem to need crazy high end graphics.

The specs page hasn’t fundamentally changed in years (and is rubbish btw). If your computer isn’t that old, it should still work. Even integrated graphics from 2013 is good enough.

Post your specs and it’ll be easier to see if you’re having a separate issue.

I purchased my computer based on Zwift specs from two years ago.

What are the pc specifications, PC’s in the last two years should have processors with capable onboard graphics.

Easy way to see the specs is drop your log file in Zwiftalizer.com

EDIT: Dave beat me to it.

I know I have Intel graphics.

Once you get home you can get the full specs.

Not all Intel graphics has been disabled.

For less than $50 you should be able to add a GPU depending on the Motherboard and PC case.

this is the message I got before the update 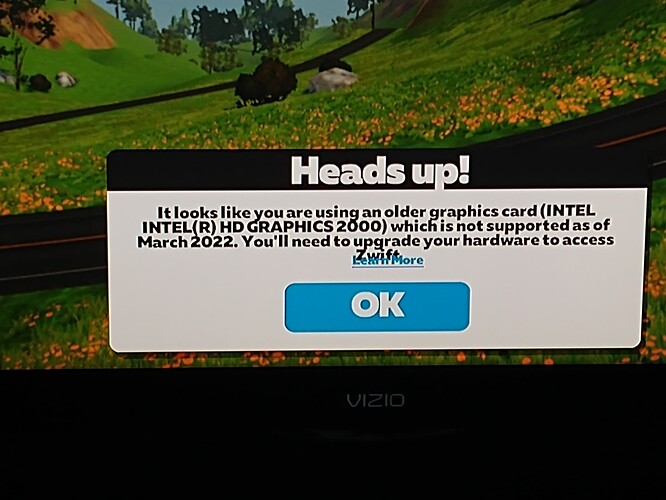 It’s probably an i3-2100. In which case yes I’m afraid it’s not supported any more. It was released in February 2011. You will need to upgrade the PC or buy something more modern. Not expensive either way.

So there is no way to run and older version? I am not sure I really feel like upgrading my computer.

Afraid not. Zwift is a 3D game, expecting it to continue to run on integrated graphics from over a decade ago is a bit of a stretch.

The latest “improvements” to training plans appear to have messed things up for a number of people. See Training program (Crit Crusher) tells me to go back to previous week

Has anyone from Zwift acknowledged this issue on either thread? Haven’t seen a response on it from Zwift. Sounds like a bunch of people currently on a workout program were impacted, and can’t properly finish their programs which would be frustrating.

All sorted now thank you

This is indeed very frustrating. What is really strange for me is that the workout I know I had remaining doesn’t even show up in the plan anymore. I was on week 11, with 3 workouts to do, and when I log into Zwift, it shows me on week 10 and said it added more time to do the missing workouts, and none of the workouts are the ones missing from week 11.

I sympathize with all the Zwifters that are impacted.

Seen a log file from a system/account that gets the new UI. Seems to confirm that:

So never mind ‘is performance crap because we’re running two UIs at once?’, it might just be this bad/inefficient full stop.

Dunno about anyone else but I’d rather be stuck with the old UI and not have performance absolutely nerfed. Might be barking up the wrong tree with this but it’d be nice to know what’s going on, because it’s definitely not right at present.

I opened a support ticket with Zwift. The person I chatted with said this “I can assure you that this is not wide spread issue and is very specific to your case.” I linked to this thread, and another where someone was also reporting this issue and their answer was for me to send them all my zwift logs.

If I get any news I’ll share here, but I really think that Zwift should acknowledge this issue and add it to the known issues post update page.

Ride on everyone experiencing this issue. I know it’s frustrating but hopefully we can get it sorted out in short order

Mine was also scrambled and, same as you, I was 3 workouts away from the end but at least I can browse to access the ones I have to do to end the plan.

Oh sharp thinking Juan! I’ll do that in the interim, thanks for the tip.