At the direction of Wahoo I did a test series they asked me to do in ERG mode where you go up in watts starting from 100 ride for a minute then go to 150 for a minute and then 200, 250. I sent them the .fit file afterwards for them to analyze. Does seem like a Zwift issue, hopefully both companies are reviewing what the problem is. I’ve shared this forum with both tickets I opened with each company. If you haven’t open one make sure to do so, so they realize this isn’t just a one incident problem.

I did a similar test on my end with the wahoo app and erg mode. Kept increasing power by 10W from 100 to 250W. Then down to 50 in one step. The kickr seemed to respond ok and with very little lag. Then I unplugged the kickr and powered off my phone so the wahoo app would not be a factor. After a few minutes I plugged the kickr back in. Then I connected my Garmin Edge to the kickr and started an interval workout. This is now via ANT+. The kickr changed the power without any issues through several intervals. The latest update (4.2.1) has an update to Bluetooth so I am guessing the issues with Zwift are Bluetooth related because with the ant+ connection the kickr seemed ok. I will be doing a test with zwift and ANT+ next week and see if the ANT+ fixes the issues.

BTW: I have done all of the steps suggested to make sure there are no multiple apps trying to control the kickr.

Forgot to mention. I am running zwift on my MacBook Pro. No appleTV.

So I’ve just downloaded Rouvy for a free trial and did a test ride. Used my MAC and iPad and both experiences had the Wahoo Kickr adjust the terrain on the ride perfectly. This leads me to believe that the issue is actually with the communication between the Kickr and Zwift. I hope that Wahoo and Zwift can collaborate to find out what the issues is on the platform.

Identical issue following the latest Zwift update on Apple TV and KICKR firmware update.
Terrain on free rides and power targets on structured workouts lag by an increasing amount (30 seconds to start, then a minute, then two minutes behind…) over the course of every ride. I’m able to control power targets on the KICKR manually through the Wahoo app on my phone while leaving it paired as a passive power meter on Zwift for now, but that’s a suboptimal and annoying solution.

Today I heard back from Zwift support. They have acknowledged that this is a widespread issue and that their development team is working on a fix. In the meantime they suggested and shared the instructions on performing a downgrade of the Wahoo KICKR firmware. I was able to successfully install the older version and confirmed it fixes the problem. Instructions are below:

Thanks to all who opened tickets and contributed to this forum to raise awareness.

Thank you for the info @Tom_Antonucci!

Downgrading KICKR firmware to v4.1.2 worked perfectly and restored functionality. Thanks for the firmware downgrade trick. What a dumb problem.

There is no blue button for me in ios. Steps 4/5

@Daniel_Rispoli_3390 … on iOS it’s the symbol of the Kickr on the screen with the metrics.
So first choose your sensor (Kickr) and the next screen should look like this … 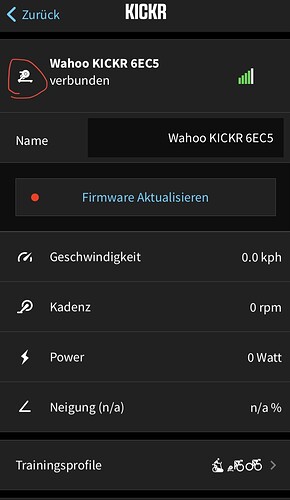 Hi all - thanks for flagging this up. Zwift and Wahoo have been working together toward a resolution of this specific issue

Problem: The symptom that shows up is that Zwift isn’t controlling the KICKR after updating the Wahoo firmware to v4.21. This occurs when you’ve done the pairing (at least in our testing) through the iOS companion app.

Resolution: Power cycle the KICKR by turning it off, then turning it back on. This has permanently resolved the issue in our testing.

Hi Shuji, appreciate that Zwift and Wahoo have acknowledged this problem and are working on a resolution. However I disagree with your proposed resolution (as have many others stated) The issue is not isolated to pairing with the companion and is not resolved with a power cycle of the KICKR. It was also prevalent with pairing directly with the KICKR, with an Apple TV, and with using a MAC version of your app, as well as IOS version directly. Others have stated the same regardless of setup both on this forum and others. The only way to resolve this issue for now is to follow the steps above to downgrade to the previous version of Wahoo KICKR firmware 4.12. Hopefully what Wahoo and Zwift are working on together is an updated Firmware that resolves the problem once and for all.

Appreciate your followup. I would like to ask everyone to check your troubleshooting workflow.

During the troubleshooting process, it’s natural for players to log into Zwift from multiple computers to see if the problem is related to the specific OS platform as you’re describing.

If you leave one session open when you log into the second (or third!) - it confuses the game server as which device you intend to use, and weird symptoms like BLE dropouts, and random-feeling resistance changes will surface.

Does that clear the issue? We’d especially like to know if it’s resolved if you’re on Wahoo’s v4.21 firmware.

I really appreciate that this issue has Zwift’s attention. I can speak for myself personally, I have done all of the steps either by myself or at the direction of Zwift and or Wahoo through support tickets, and the issue still persisted. I ensured all platforms whether it was iPhone (IOS latest version of OS and app), MacBook (Latest version of software), iPad (Latest version of OS and app), Apple TV (Latest version of OS and app) I ensured all apps were closed out before checking the next including the Wahoo IOS app. The issue still persisted on all platforms. What has convinced me that this is a communication issue between the KICKR and Zwift is that even on the 4.2.1 firmware I was able to use other competitors apps (Rouvy for example) and there was no issue. Only when I took the steps to downgrade the firmware (which Zwift support advised to me to do) to 4.1.2 was I able to get the KICKR and Zwift to perform as expected. I hope this helps and that Wahoo and Zwift can find a resolution and new firmware update that resolves the problem once and for all. Until then I am sticking with firmware 4.1.2

@Tom_Antonucci
If downgrading the firmware worked for you - I would roll with that too if I were in your shoes.

For others reading along who are on Wahoo firmware 4.21 - can you verify that the power cycle step worked for you?

And if power cycling didn’t help - would you confirm that you do not have mutliple instances of Zwift running on several computers?

Many thanks folks - we’d like to build up enough data points to confirm that this is working (or not).

Ive done 3 separate sessions this week since updating and I unplug the kickr each time and still had the issue today.

I only run on one computer so no other platforms this week.

Firmware rollback did the trick.