May I ask what the exact issue here was?

Wait until you get the email… 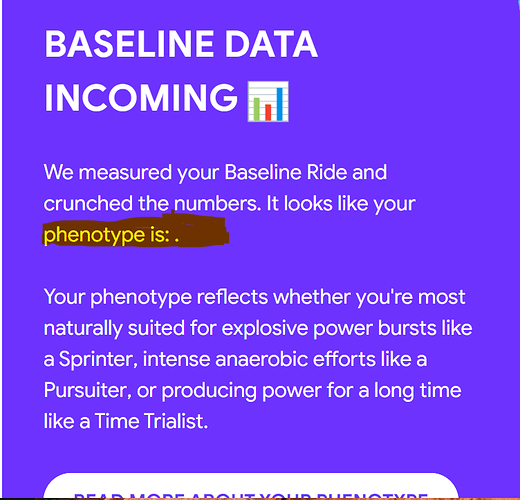 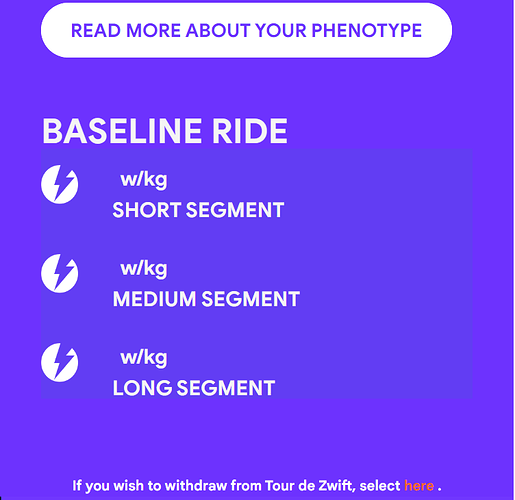 Everything is blank… is that because of the rubber banding?

It’s because you’re too powerful. You left Zwift speechless.

Totally unrideable especially for early segments where you pace based on expected time, basically led to flying and dying for no reason. Very poorly implemented and I try not to be a complainer.

only in my dreams!

Tell me they have a way to fix this ride without having me redo the whole thing.

Yep I’ve just received a blank email as per the others.

So what is supposed to be the process here?

I just watched an early baseline ride on youtube which showed the rubber banding. Everyone was switched to a TT bike on the timed segments because apparently Zwift doesn’t want the draft affecting the segment times.

Well, the rubber banding has ruined the times of anyone who has done this event already.

So here’s some questions that need to be answered:

Thought it was me, seemed much harder overall to get results in the segments. Noted that in the really long rest / recovery segments I could do 0.7 w/kg to keep with those doing over 2 w/kg …

Also recieved the results e-Mail with no data, going on previous responses and lead times from Zwift, they might resolve this for ZA2023……

You’re so good buddy they don’t know how to quantify your abilities…. Nothing to improve either!

Hoping baseline is fixed in next few days. Looks like I’ll try a race tomorrow.

Zwift Companion app now tells me my “best efforts” from the rubber banding event - I broke all my PRs, but it was not because of my effort…
Does this mean I won’t be able to compare my efforts with the Finish Line ride (where rubber banding is disabled)?

Chalk me up to this bug as well. I called it out in the chat function too and everyone kept trying to say that’s how it was meant to be. Doing some YouTube videos on my progress and hopefully improvement, so this is a big downer for me because I am NOT redoing this baseline ride. I really hope they can fix the files on their end.

We’ve removed the workout & banding. The Baseline will now be a ride without draft and you are free to choose which bike you would like to ride it on.

So, if we do it again, the second round of data will replace today’s and we start “fresh”? And the email has the data? I haven’t gotten an email so that would be good.

I’ve got the issue too. What with ZRL and the WTRL TTT I doubt I’ll be able to redo the Baseline Ride, so hopefully Zwift can provide the relevant info from the data they have.

Hope so or a wasted day for me here, avoided anything stressful earlier then with this ride preceded by a warm up the cool down etc took two hours of time that hopefully doesn’t turn out to have been wasted.

Same story here. I was hoping it was some clever way of looking at your power over the segments rather than the time itself! I thought it had worked perfectly because I ended up with almost exactly 2 minutes, 30 seconds and 9 minutes as my 3 segment times. I thought i went ‘early’ on the sprint and faded at the end, but it just took longer than normal!
I got the ‘results’ email with nothing on it as well.

At least for me, I can write it off and decide whether to bother trying to re-do the baseline. Some poor people have taken massive chunks out of their PB’s that they will probably never be able to reach again because the banding dragged them along!

I received results in my email (times and w/kg for the segments; the phenotype is still blank). But the w/kg is all wrong. My weight is the same on Zwift and Strava, and Strava posted the segment times that I remember, and tge power numbers on Strava are what I would have expected. Zwift has me comically low - 4.3w/kg for the short segment, so 275W at 64kg, rather than the 529W that Strava recorded.

So, even putting aside the pacing issues resulting from having a segment take longer than you expect - there’s clearly something else wrong.