I have a Tacx Neo and in the last couple of weeks my RPM has been prone to significant fluctuations. Sometimes its as high as 190, which is clearly unrealistic. This has only started recently, so i am wondering if its connected with the latest upgrade. It seems to be most pronounced on the new gravel surface, but does also happen on other courses .Looking at other riders I see a bit of extremely fast pedalling, so i am wondering if this is a known fault?

Welcome to the Forums!

What you’ve reported is a known issue, but I’ve included the appropriate bug report tags on this thread. This will provide your issue with added visibility as Zwift’s developers work towards a fix. Thanks!

Yes, same issue with 2018 Kickr running on W10. It is most pronounced as a problem in erg mode and not so much in regular slope/course mode.
Bill Black

To the best of my knowledge, the bug report for the RPM issue is written up for Tacx Neo trainers, not Wahoo KICKRs. This is due to the connection between the gravel and “road feel” aspect of Neo trainers, which is not an option for KICKRs.

If you’re experiencing cadence/RPM issues with a KICKR in ERG mode workouts, it could be the result of a calibration issue or perhaps signal interference.

If problems persist after trying those things, there could be something else amiss with your specific Zwift setup, so please contact Zwift support and our techs can take a closer look.

You can reach us here.

I have tried all of the points you suggest and the same problem with revs shown on my Kickr (2018 running W10) has persisted principally in erg mode and when doing higher rev riding (90+ actual and then suddenly shows 120-150 or higher). My Kickr and Zwift are fully updated and further this doesn’t happen with PerfPro or Golden Cheetah Trainer function. I am positive this is a Zwift problem and I personally know some others experiencing the exact same issue.

Fair enough. Since you’ve tried the basic stuff, then it’s best that you contact Zwift tech support and our team can take a closer look.

I can’t say why others are experiencing the exact same issue, but if you personally know these Zwifters, it might be helpful if you’re willing to steer them towards Zwift support as well (if they haven’t contacted us already).

As mentioned, you can reach us here .

Do you use inbuilt cadence or an external sensor? I ditched the external after one ride due to inaccuracy. Wahoo support will also tell you that smooth and fast cadence isn’t reliable compared to external sensor.

The other thing to do, which may or may not help, is switch ERG smoothing to ON in your Wahoo app. Power off and on the the Kickr after making the change. It only applies to Workouts and wont help non-ERG workouts.

Thanks Dean, no external cadence sensor, all just through the Kickr. Good suggestion re erg smoothing — I don’t specifically recall seeing that setting but I calibrate the Kickr regularly through the Wahoo app on my phone (Samsung android) and I’m sure that setting is in there somewhere.

Steve, the folks I referred to have contacted Zwift tech support to no avail and in most instances no response whatsoever. In fact, the link your provided in your message results in a dead end and no ability to accomplish chat or other supposed contact with tech support. I’ve included a screenshot below of execution on your link. 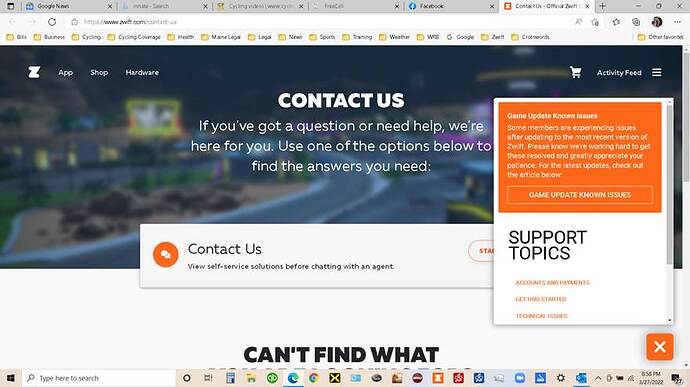 link your provided in your message results in a dead end

Use the box on the right and choose a Support Topic, you will need to type a question, the chat bot will show some options, choose the “no this didnt help” option and eventually you will get a choice to email the team.

In the Wahoo app, tap KICKR from “Linked Sensors” (once your phone has connection) then scroll down on the page till you see this …

Note that its a dynamic page so options will appear as Kickr features are found over a few seconds. Make sure the Wahoo App is closed and I normally re-power the Kickr if I make any changes in the Wahoo app.

Typical of Zwift to blame any issues on their customers. People in multiple forums have been reporting issues since the most recent Zwift updates with things like RPMs, resistance and more.

It’s not your customer’s equipment or software versions or Internet connections- it’s Zwift’s poor quality software that introduces new issues with every update. So stop blaming your loyal customers that are keeping you in business and start taking some responsibility for the glitches and poor code.

Dean, I checked the Wahoo/Kickr app and the Erg Mode Power Smoothing was already activated and so I have deactivated it (unchecked it) and I will see if that does anything to address the problem. However, I expect it’s a Zwift issue resulting from Zwift’s algorithm doing some sort of estimation of rpm.
Bill Black

I expect it’s a Zwift issue resulting from Zwift’s algorithm doing some sort of estimation of rpm.
Bill Black

Zwift doesn’t estimate your cadence. It relies on what your trainer reports. It doesn’t do anything with cadence other than display it on the screen and log it.

Steve:
Then why does it report differently than PerfPro, Golden Cheetah trainer function, and Trainer Road all of which report virtually identical cadence stats and show none of the crazy high rpm spikes reported by Zwift?

On balance I like Zwift but seemingly Zwift seeks to implement dressing folks in earned garb, badges, and bikes and those add-on perhaps impair the functions more important for serious training. Maybe that is where Zwift’s actual future market lies (gimmicky diversionary aspects)?
Bill Black

Then why does it report differently than PerfPro, Golden Cheetah trainer function, and Trainer Road all of which report virtually identical cadence stats and show none of the crazy high rpm spikes reported by Zwift?

Something could conceivably be going wrong with either Zwift’s capturing of displaying of the cadence data reported by your trainer. As I said, it doesn’t do anything with your cadence data other than display and log it.

It’s your trainer that’s estimating cadence (almost all trainers estimate cadence based on power fluctuations in pedal stroke, or similar).

Are you using ANT+ or BT? If it’s ANT+ then you could pair a bike computer to your trainers cadence output as well as Zwift, and that would let you see exactly what cadence the trainer is reporting while connected to Zwift.