New to Zwift (Hub), trouble with MTB setup and resistance

I am relatively new to Zwift, I only got two rides in my legs as of today.
I bought a Zwift Hub and am running Zwift on an AppleTV. Since don’t own / never owned a road bike I am using my 29" Mountainbike for zwifting. I had the impression that this was a legit thing to do.

I quickly discovered that I could not use the supplied 12-cassette for my MTB setup, so I bought a SunRace MZ800 cassette as a replacement, since it fit the freehub body of the Zwift hub. That brought a significant improvement to riding / shifting, but one issue sadly remains:

I do feel almost no resistance on flats, even when I run the highest gears.
It is OK on climbs, but even then I am running on 5th or 6th gear on the steepest climbs, that I would barely make on 1st gear in real life.

I tried setting the trainer difficulty to max and it helped to some degree, however the driving experience was total unsatisfiying since this made pedaling feel “mushy”. I felt like if I was “slipping” during pedaling in the lower gears.

I am kind of desperately hoping that there is a solution for this to make training on my MTB setup enjoyable. Everything I saw so far in Zwift seems really great, and I could really, really see myself getting into this quite a bit! I’m loving it so far - if only my bike / gearing worked so that I don’t constanly spin out and can experience some decent, realistic experience when riding on flats and downhill.

It sound like you got very small gearing on the MTB and therefore it is impossible to keep up with Road bike gearing.

Thanks a lot for your quick reply.
I don’t mind getting overtaken by the road bikes all the time. It’s just what happens in real life as well on the streets.

What I’m talking about is that I can ride my highest gears at cadences near 90 or 100 on the flats without feeling a lot of resistance. That feels really unnatural, because it’s not what I am used to. I do road cycling on my MTB for training purposes as well, and I have a nice loop nearby that is pretty much totally flat (maybe 1° inline from time to time), and even on days without any wind I’d have to put in pretty much effort to ride my higher gears at a cadence of 80.

from BikeCalc.com speed chart, with your gear ratio you will likely spin out on the flats on Zwift: 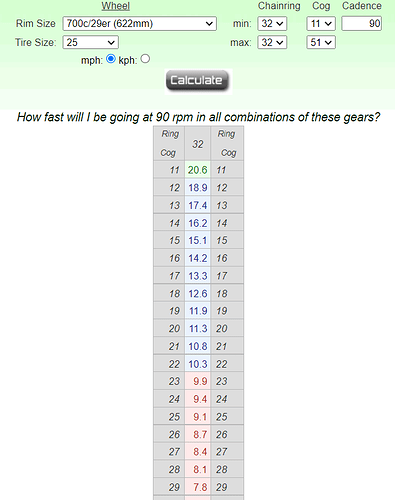 If it’s compatible with your frame, you can install a larger chainring and a longer chain. You are not the first person who has tried to ride in Zwift with a 32x11 high gear, and the others seem to have had the same experience.

On the road, your bike also generates more resistance due to the tires. Zwift doesn’t emulate this added resistance. It would be great if the base resistance of the trainer could be increased, but I’m not aware of a way to do that.

However, I’d not be able to keep up 90 cadence on a flat in real life, because of tire resistance, wind, etc. I’d never be able to maintain the watts output for longer than a minute or so comfortably?
Also, this would fell nowhere close like spinning out.

I wish this was somehow replicated in Zwift as well.

Paul, that’s what I thought. I can’t be the first with this “issue”?

Unfortunately, my frame has no room for a larger chainring.
I already checked that (I’m riding a Canyon Neuron 7 Al).

It seems like the solution would be the option to add some resistance that makes up for the added wind and tire friction? The Zwift Hub certainly has the power to do so, it seems like a purely software related issue to me? And probably it’s not that tough to implement this as an option for MTB riders as well? Even for racing I think this wouldn’t be an issue, because all I want is that pedaling feels realistically harder, not gain an advantage over other riders?

I don’t think this is a superficial request or subjective feeling.
Not feeling an adequate resistance renders the whole experience not only unrealistic, but it seems near impossible to get an andequate training effect with Zwift if it behaves like that (for my MTB setup)? On the flats, all I can do is chill cooldown runs?

This is something that has been asked for for a very long time. see: Increase baseline resistance - #148 by Robert_Kaluza

I had the same issue - 32T up front and 12 speed at the back. On the flats the 32/10 would pretty much just spin out with any resistance. I actually ended up just getting a new bike with a 48T up front and resolved the issue that way. I sent back the 12 speed cassette I had ordered too. I actually think a 52 up front would probably be the best sweet spot though.

There is an app (qdomyos-zwift or something)
which apparently lets you set the base resistance and act as a go between. That looks like it could let us use the MTBs. I thought of trying that but in the end decided to just put a dedicated bike out there - saves having to pull the MTB off when I want to actually ride. I know having to do that often would wear pretty thin quickly!

I agree though - being able to adjust the virtual resistance/gearing on flats - would help make Zwift more friendly to MTBs.

I might try the QZ app mentioned in the forums, but I am bit reluctant having to rely on a third party app just to get the basic functionality that Zwift could offer by simply adding this option. It’s not that anyones experience would be worsened by it? Is there any reason NOT to add this features, since it seems to have been requested many times?

Getting a bike solely for Zwift is of course a great solution, as long as you can/want to afford it.
It’s certainly not what I had in mind when diving into this universe by ordering the Zwift Hub. And since I had planned to use Zwift in the wet/cold season only and get back outisde in spring / summer, I don’t think I would have had to swap into and out of the Hub that often.

I agree. A dedicated bike is nice but shouldn’t be something required. I was planning a second bike so the Zwift Hub just bought that event forward. If I wasn’t, I would have most likely just returned the hub.

Seems common across all trainers though. I just upvoted the request to add a base line resistance.

Even with the 48 up front on the new bike I’d still add a small amount if it was available! Having that option would open up Zwift to a lot more users! We also need more dirt to play in!

It’s not that anyones experience would be worsened by it? Is there any reason NOT to add this features, since it seems to have been requested many times?

It’s definitely a reasonable feature request. Whether it will happen is another question - it certainly won’t happen quickly unless they’re already working on it, but there has been no engagement on this from Zwift on the forum as far as I know. You might try free trials of various indoor riding apps to see if any of them offer a better experience with your bike. I think Zwift is the best but your priority has to be usable equipment.

Just for a quick update: I tried the QZ up mentioned above, but couldn’t get it to work with the Zwift Hub (as it is obviously meant to be used with other equipment, if I am understanding correctly?). Too bad.

I am now starting to try other apps to try and see how riding feels there.
However, I still think Zwift has a lot of great features.
Come on Zwfit programmers, do something!

I’m sure a lot of MTBers would love this and join for their winter training needs.

The developer @Roberto_Viola is quite responsive. If you’re interested in pursuing QZ with the hub, I suggest posting your experience on the GitHub discussion page for the project: 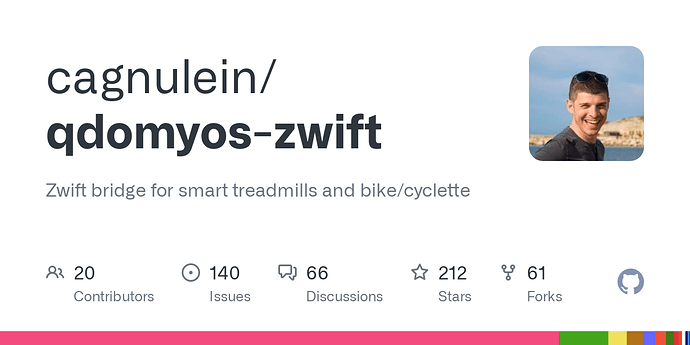 Ah - that’s a shame with that App. Sounded hopeful but not ideal.

I haven’t tried the hub with anything other than the GTA bike Mod. That behaves the same with the MTB but I didn’t dig into if could configure some base resistance in its config though. I keep meaning to try it with Mywhoosh and Rouvy!

The odd thing is the promo video for the hub shows someone riding on a mountain bike. So its being promoted as something for ‘us’. My only guess is they had it in ERG mode on the MTB or we somehow have Thano’s level leg strength and its just us.

no one asked me about zwift hub compatibility yet

write me on github and I will add it easily

thanks @Paul_Southworth for mentioning me

I have a same problem,tray with Tacx training app i thing that app work fine with mtb.
have same 32x51 12 speed

That is awesome! Even with the new bike with a 48 up front I’d like to add a small amount of resistance!

Would love to put the mountain bike on the hub for the odd ride still, especially with the GTA mod!

There has to be lots of potential users with MTB that could be tapped here!

@Michael_Aers sure, please let’s continue the discussion on my github page. It’s 11pm here, so if I’m not answering you back is because I’m sleeping

For the zwift hub I just need to know the name that advertise it over bluetooth. You can use the free app nrfconnect to get it. Let m know