Messy screen: showing All riders up to 50m

Because this is not, or very difficult to read, I would not show them.
Showing the names should be an option in a configuration file [Show rider names :Yes|No]
Personally, I don’t need to see them. But that is my opinion. 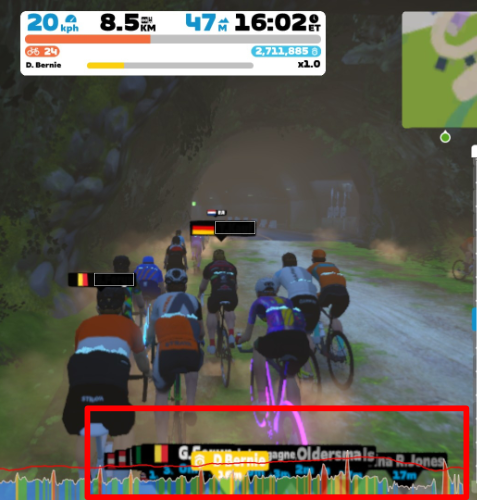 The solution to always be able to see the distance to the Pace partner is quite simple. See image below.

I had the exact same thought about the RP “solution” as well. Plenty of space to put the distance between you and the RP.

I’ve had a similar thought lately but with a slightly different solution: make the RoboPacer “sticky” on the rider list at the right.

As it stands, if there are too many riders between you and them, the RoboPacer doesn’t appear on the rider list. I’d like them to stay visible at the top or bottom of list with their distance/time spread.

I can be literally 3-meters 1-meter from the RoboPacer right now but not see them on the list because the pack’s too big.

This is the way HoloPartners are treated so it would seem like an easy change.

This is the way HoloPartners are treated

Ohhh that’s a really great point! I snapped some screencaps on my ride this afternoon to underscore the point: RoboPacer D.Maria 1m behind me, and another of her just ahead. In both cases, she’s not on the rider list. 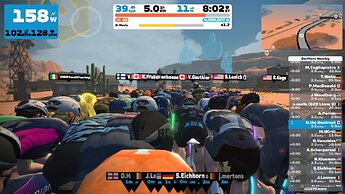 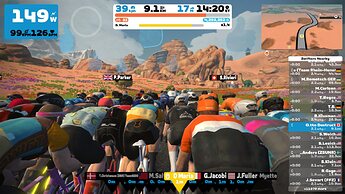 In contrast, here’s another screencap with two of my PR ghosts, both “stickied” to the rider list. 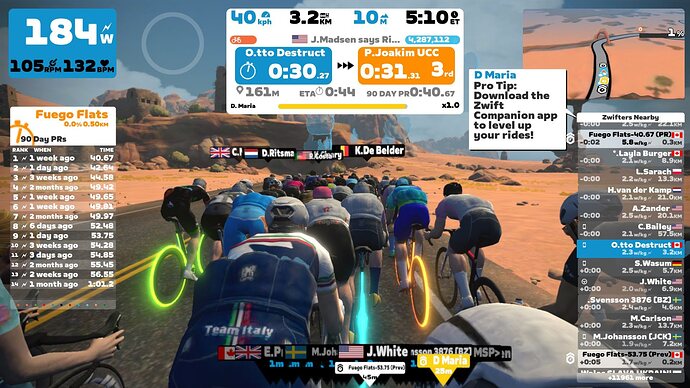 You must be new here.

I’m kidding, but sort of not.

To illustrate the point: Meetups have a “Keep Together” option - aka “rubber-banding.” It’s great!

In Clubs, rubber-banding is broken. Why? Because (and this is almost word-for-word ZwiftHQ’s answer) “They’re coded differently.”

I am not holding by breath for a fix to the RoboPacer being off the list. Here’s hoping.

So many people in Watopia this morning… and the Pace Partner groups were huge!
I’m not 100% sure about getting rid of the little name boxes. They can be helpful in a race (ex., they say rider is 30m behind), since the rider list isn’t super accurate with gaps.
But they do get in the way of screenshots, since they aren’t taken away by hiding the HUD. That bothers me more.

But they do get in the way of screenshots, since they aren’t taken away by hiding the HUD.

Are you sure about this?
I went back and looked at a few of my screenshots where I had the HUD hidden, and in RP rides, there were no name boxes at the bottom.

They’re removed when you hide the HUD in-game, they’re present on ‘clean’ screenshots, or where you toggle off the HUD when saving screenshots at the end of a ride. If you want to take a properly clean screenshot, hide the HUD when riding and take it manually. That’s also how to get them at full display resolution.

2 posts were split to a new topic: Forum scroll text

They’re removed when you hide the HUD in-game, they’re present on ‘clean’ screenshots, or where you toggle off the HUD when saving screenshots at the end of a ride.

After reading the comments I made an example where all the suggestions come together.
So always put the RoboPacer on top and add a distance column to the “Zwifters Neaby” window.

Then the names no longer have to be drawn criss-cross on the screen. That also means better screenshots 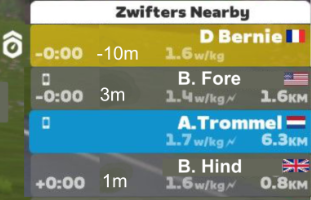 I keep meaning to ask, and sorry this isn’t directly relavant but it is related - is this rider list at the foot of the screen device-specific? I don’t have it on my iPad and I don’t think I ever have, is it just not available for some reason on that platform? Or is it an option I’ve never seen?

I’m quite glad to not have it, it seems like extra clutter, but just wondering why I see this in other people’s screenshot but never have this shown myself.

It’s not on iPad. Some have complained about it being missing.

OK thanks, I guess this is where the much-demanded interface customisation feature request comes in…I for one definitely don’t want extra clutter, I’d prefer to remove more of the existing elements let alone add more.