How can we “just ride” like older zwift versions allowed please? Now i have to select a route or workout or suggestion to ride. We used to pick a world and select “just ride” and off we rode. Thanks.

Hi! Zwift is currently working hard to bring this feature back. Zwift has confirmed that the feature is coming back, it will just take some time to implement the feature. See this thread: Game Update 1.27 [July 2022] - #6 by shooj

Nice intent but it shouldn’t have been removed in the first place let alone disabling the hack that allowed me to substitute an off-calendar world in the place of Watopia. I feel that with a number of these “improvements” the value of my subscription is being reduced.
Adding to this, the most recent release (encrypted network but no developer’s API availability) which killed FOSS (free and open source) Zwift add-ons. Its like adding insult to injury.

Methinks that’s a different disappeared function. Reference was to Just Ride, not Ride With

Ah, my bad. So used to people asking about the ride with, as that is the most common feature request with this new homescreen.

Thank you. I was hoping for the “Just Ride” feature to return, not to be confused with the “ride with” feature. Please hurry the “just ride” feature return along. Thanks!

In that case, I don’t think Zwift has any plans to restore the “Just Ride” feature.

As far as i remember Just Ride and Ride With was the same button in game. When you selected a person from a list it changed from Ride to Ride With.

In the old home screen UI (still on iOS, for example), they’re presented like this: 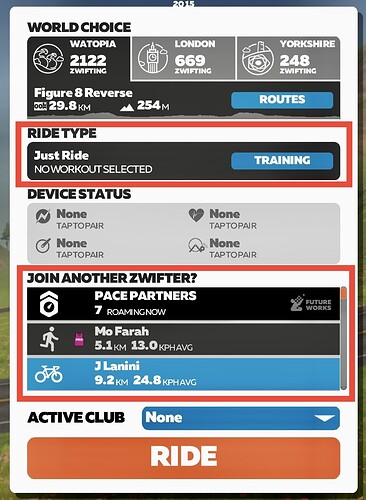 Thank you Roule! Exactly right. Hope they bring back just ride option soon. Appreciate the spot on picture you inserted very much!

This option is available…in top left corner you select 3rd icon from the left ‘‘World’’ and then the Route and you will have the option to start Just Ride. The change is that you have to select the Route every time.

I think this is the problem, they wanted to just hit the button and ride without the need to select a world and then a route.
So load the game and press one button on the first screen and get riding.

Thanks everyone. One workaround I’m using since the “just Ride” button is no longer here is after I select the world and then a route, at the first opportunity for a turn, I take it and now I’m off the route just riding I think.

That is effectively what just ride used to do it is just that it would autoselect a world and then pick the last route you did there.