Is this what run workouts are supposed to look like? 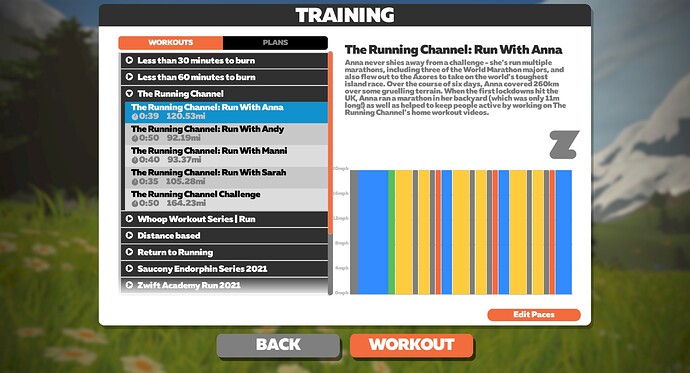 Confirming that black boxes on ENVE logos in iOS are still there.

No, this doesn’t look correct.
Is this affecting all your run workout previews, or just this folder/workout?

Looks like it is just the new running channel workouts. This is on Mac btw. Edit: It is affecting a few more… maybe it is something related to these paces, they look off… 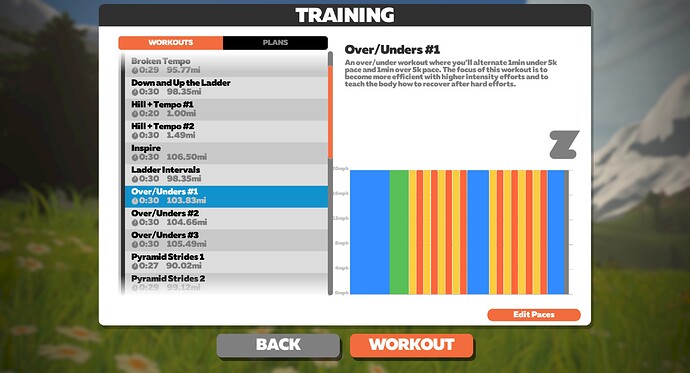 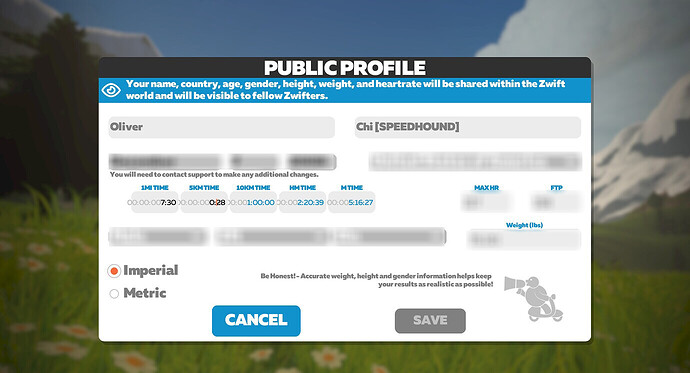 Every time I see update, I look for Ethernet enablement via Wahoo direct connect. One day, one day

Still a massive drag on the CPU that was present in the previous release. The game takes 40-50% longer to load than expected and I cannot hold 60fps in solo ride situations on Watopia even with hardly anyone else around and the GPU with loads left to give, on a setup that would ordinarily and historically easily manage this.

Not being a running expert, I’m not sure how reasonable those paces are for you (or any human) but I can confirm that the running workout interval targets are based on your run paces from your profile data. If you set your paces to correct values, do the workouts appear normally?

Oh, that fix is scheduled for the second Tuesday of next week, or the 12th of Never, whichever comes first. /s

After a couple of lost days resetting/uninstalling/installing everything I could think of, I finally resorted to buying an Ant+ dongle for my Kickr. It still leaves my Sterzo high & dry, however. (And I still have a Direct Connect cable sitting in a box, unopened since April 2021, patiently waiting to render all these wireless connectivity issues moot.)

Dear ZHQ, if you’re going to claim to allow bluetooth pairing for devices connecting to your platform, you owe it to the users and device manufacturers (who, imo, have done as much if not more than Zwift in making Zwifting an enjoyable experience) to ensure it works all the time and not to pretend there is not widely known issues.

At the very least own up to the fact that you haven’t been able to adequately resolve the issue/issues or communicate specifics about it in a way that makes users feel like you actually give a flying you-know-what.

Your workout paces are messed up because your 5k time is entered as 28 seconds. Fix that and it should be OK.

103 mi in half an hour so 206 mph, are you the Road Runner or something? Beep-beep to you as well, gentle Sir.

Back to normal now.

I’ll ask again, when will there be support for the Wahoo Direct Connect adapter? @Wes ??
Thanks for your reply

No specific ETA at the moment, but it’s being worked on (and has been for some time).

I was on week 8 of 9 on a Gravel Grinder training plan, having completed all workouts in previous weeks, and 3 of 5 this week. After the update, five extra workouts have been inserted in week 7 (and are available now), the completed week 7 workouts are shown in week 8, the week 8 workouts are in week 9 (3 completed and 2 available in 4 days, suggesting I am still on week 8), and I guess the original week 9 workouts have been pushed out the end because they’re not shown any more!

How do I download this update? I saw the message initially when I first opened my Companion, but after clearing that message, I don’t see any way to load the latest version. I have an Android phone.

Or, is the 1.23 version for the Zwift software on my home computer? But I don’t see any ‘Update’ message on that either.

Good call Dave…big drag and frustrating that I need to join events, workouts or races during a warmup about 5 minutes before to ensure I make it in on time…Which then shortens my warmup…and I hate that!! I know…warmup sooner, 99% of the time this is not an option with work etc…You gotta fix this or RGT is looking good…no drag there!!

1.23 is the latest update, your PC is all set , they automatically update.

The message appears after a new version is installed, clicking on would take you to a read-me for what’s new. So it looks like your Android is set to auto-update apps (most Android devices do by default).

For full transparency I’m talking about the game taking 42-45secs to load instead of the usual ~30secs, on a desktop PC with an SSD. I fully expect some will say this is an unreasonable complaint, but that 30secs on the same hardware has been extremely consistent for literally years. The knock-on effect of this can be seen in frame rates which are lower than expected. Something is different about the game in the last two releases, and it’s negatively impacting performance.

How do I download this update? I saw the message initially when I first opened my Companion, but after clearing that message, I don’t see any way to load the latest version. I have an Android phone.

Or, is the 1.23 version for the Zwift software on my home computer? But I don’t see any ‘Update’ message on that either.

The latest version number (1.23.0) applies to all OS platforms.

On this What’s New board you’re reading now, there’s a “What’s the Latest Version” thread that gets updated every time we release the game app or the Companion app.

We have a handy how-to-update article for every OS platform we support here.