I had my last ride on PC/Windows on Saturday. It was a group ride and as far as I recall there was no unusual behaviour to report. Specifically, distance to ride leader (yellow beacon) was displayed whenever i was ahead.

On Monday I switched to an Android 9 tablet and had a Pace Partner ride. Unfortunately the distance to PP was never shown as a label on screen whenever i was ahead, making pacing and distance management way harder than it would normally be.

Today i switched to an Android 12 tablet and had a group ride, this time with the latest Zwift software. Again, no distance to ride leader was shown.

Did i miss an announced change? Is this Android specific? Is it a global bug? If it’s an intended design change i can’t say that it’s helpful and I’d prefer it to be changed to how things were.

Do you mean the markers at the bottom of the screen that show distances to riders behind?

I’m not sure about an android tablet but i know such markers don’t exist on Ipads and never have so would not be surprised if android is the same.

Yes. The label at the bottom of the screen that shows distance behind of the leader up to 50m before fading out, then returning when the distance closes.

As a Zwift PC user for almost seven years I was disappointed to notice its absence on two Android tablets with two OS versions and two Zwift versions. I assumed it was a bug. Poor form in my opinion if it’s by design. Not cool.

I’ve used Android for running in the past, but this week was my first group ride and PP ride on Android and the inconvenience was instantly evident.

Yep it’s quite annoying particular for TTT races. I actually go to the effort to ask who is running in ipads so i can look out for them as they can’t judge gaps properly.

Ah, my concern was with ride leaders and PPs. You’re saying that no riders behind show distance behind as they are closing or dropping. Seems a massive backward step for the “game” aspects. More true to life for racing, I guess, but then you get the issue of platform penalty. It’s not fair if PC racers have the advantage of critical data that tablet users don’t have. I wonder about Apple TV.

I’d say that missing features equals bug. Maybe one day somebody from Zwift will drop into the discussion and confirm.

ATV has the markers but yeah it is a massive pain for others.

Most don’t notice as they have never had it but it became super obvious when DS TTT teams when you end up having to keep shouting at riders for pushing too hard and dropping people.

Always assumed this is by design on phones and tablets, to preserve screen space.

How big is an iPad Pro?

Perhaps Zwift should ask their users.

Loads of room on tablet. 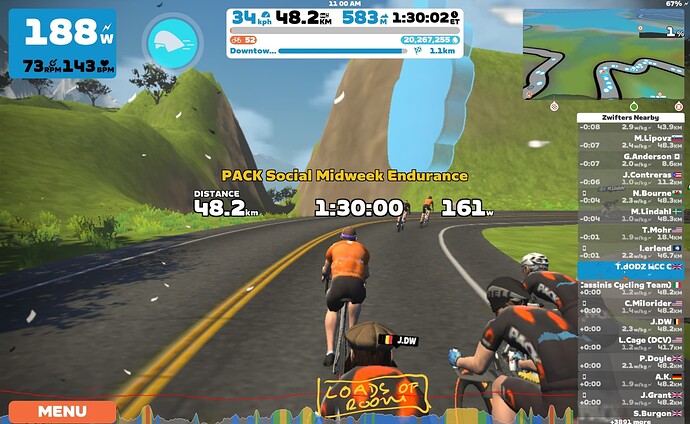 And if you look at how tiny some of the text is that we are permitted to view, there is no reason not to show distance to leader in a font size of equal utility.

I’m not saying it’s right, was just a theory. Your tablet may be physically quite big, but most phones aren’t. They might think it’s too cluttered for a phone.

It could be a CPU load issue. Who knows.

I’ve just bought a Samsung Tab A8 for Zwift and have noticed this as well. This is troubling as my Pixel 3XL shows distance behind markers and so also does my Pixel 4XL. This tablet has a 10.6 inch screen and is larger by a factor of 2 and also was manufactured new this year. I am hard pressed to believe either screen space or compute capability are plausible explanations for not supporting this feature on this device.

I’ve raised this as a ticket with support and directed them to this discussion topic. I’ve had a reply and, following the initial recommendation to clear cache, reinstall, blah, blah, blah, I’ve pushed back and they will escalate internally to the “best team” suited to investigate the issue.

p.s. - I’ve reverted to using Windows, albeit on an ageing XPS 13 laptop instead of my desktop PC, but at least I’ve solved my own problem for the time being. There are other benefits to Windows too, such as proper screen prints of ride summary screens that actually save with the ride rather than not. Do Zwift not know that there is no F10 button on Android?