I’m definitely with you here, it’s not working properly and I have shared activities in wrongly assigned clubs too, especially when riding and running clubs are different… Because I’m saving on companion app without looking on the computer screen whatever is selected! So it’s clearly annoying indeed…

Because I’m saving on companion app without looking on the computer screen whatever is selected! So it’s clearly annoying indeed…

Yes! So true. Especially since we can’t undo the assignment. Grr

Can you pls set the default club ride setting on the save page back to “no club”?

But importantly, that change was not supposed to be (at least it wasn’t what anyone wanted) that the default was always going to be a club. ‘Last Selected Option’ should be the default. That, or the ability to manually select a default as a user.

But importantly, that change was not supposed to be (at least it wasn’t what anyone wanted) that the default was always going to be a club. ‘Last Selected Option’ should be the default. That, or the ability to manually select a default as a user.

Ok. But it isn’t working because I never selected a club but one gets assigned.

It should work the way everyone before was asking for it to work, lol.

I belong to several cycling and running clubs. Upon completing a ride and saving, the first club in my list of “share to club” appears to be the default setting. 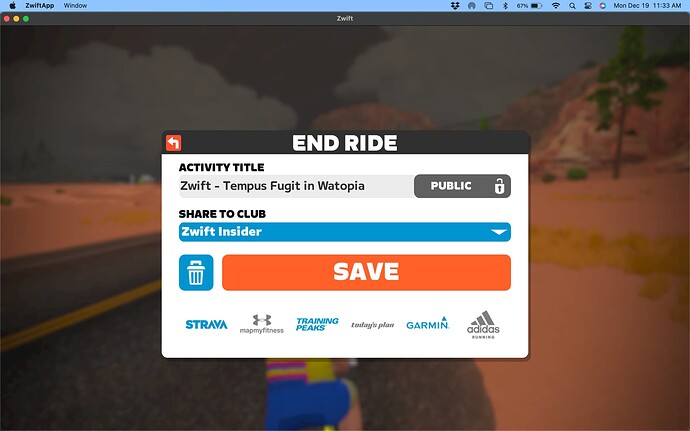 Is there a way to change the default to “no club” which I believe is an option in the list? I find it extremely irritating to have irrelevant activities save to a club because I overlooked the setting.

What am I missing here?

It doesn’t work the way many people want. I’m not sure if it’s a bug or a design choice that people dislike.

Can you pls set the default club ride setting on the save page back to “no club”? It used to be that. Now, it defaults to the first club in my list. I have never used this setting and don’t want to use it so I didn’t notice until it was too late that my rides were going into the wrong club. AND, I c…

It used to work that way. Now, when an update is pushed, it gets reset to the first club I joined. Rarely are my rides with that club. Setting it to no club by default is better than the wrong club, IMHO.

There were a bunch of people, myself included, who were irritated that the same overlooking on our part ended up having the event saved to No Club.

What was asked for was that the setting would default to the last choice you picked. Whether that be a club, or No Club. What they changed it to was just the last club, but it apparently won’t default to No Club. It should do that–it should default to whatever option from the list you chose last.

That said, if it can’t be that way (and it should be that way), there is no reason why defaulting to No Club is better than defaulting to the last club chosen. Again, previously there were a bunch of people irritated that our rides didn’t get saved to a club because of an accidental too quick button push. Now there are people irritated that the same too quick button push gets their ride saved to a club. I don’t see why one is preferable to the other–neither should be the case, but neither seems better than the other.

An easy fix for this is to allow editing the club after the ride is saved.

What they changed it to was just the last club, but it apparently won’t default to No Club.

It doesn’t even do that. After every ride it defaults to the first club in the list of clubs you’re part of not the last club you saved a ride to.

Hmm. I don’t know that that’s what I’ve experienced. I thought it was defaulting to my last choice. I haven’t changed that choice in a while, I’ll try that next time and see what happens.

Fwiw its happening to me on AppleTV.

No, I’m only in two clubs, and I was pretty sure that it had been defaulting to my last choice. I’ve been saving everything to one of the clubs for the last week or two, so I don’t have a recent memory to draw from, but I thought that’s what was happening. I could be wrong–that’s happened at least once before

I was part of one club. I didn’t have much to do with that club. I grew tired of it always defaulting to that club, when I didn’t want to post to that club, I wanted “No Club”, so I left the club.
Problem solved.

This needs to be fixed. Defaulting to the last selected club is the way it should be. Right now I can’t make it default to “No Club.” The vast majority of the clubs I belong to don’t care about the vast majority of my rides. Until it’s fixed I guess they’ll have to be annoyed with all my rides being uploaded to the club page.
Obviously not a showstopper. But it needs to be fixed.

Did a code patch get applied to this issue recently?

In order to keep my rides from going to the wrong club, I set it to the club I race for, even if the event wasn’t a race. This demonstrated that, if you selected a club, it remembered the club vs defaulting to the first club in the list.

Recently, I noticed that my selected club was showing up first in the list in CA.

I don’t know why it shuffled the order but whatever.

However, that got me curious. So, I set a warmup ride to No Club and saved. Then, after the workout ride, I crossed my fingers and hoped to see No Club. Instead, I saw the last club I selected during a save versus the first club I ever joined - like the issue started out as.

So, either something attempted to be fixed in the last update or the problem isn’t that simple.

Well, no. That other club doesn’t have to be annoyed by seeing your rides, because it’s still possible to upload them to the right club. This bug is an issue because we don’t always remember to do that. But all of us can remember.