I had this happen Monday during a crowded Tour de Zwift ride. All sensors were fine but my position blanked out (" — / 607 riders") and some of the riders disappeared. Clearly there was a transient connection failure to the server that self-corrected. 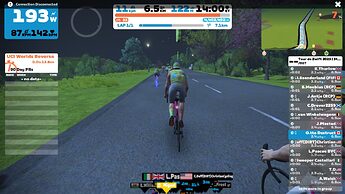 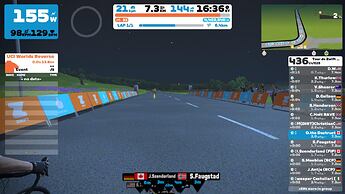 The warning has nothing to do with Wi-fi disconnects. If you get that then the riders around you will disappear.

The message is a disconnect of one of your connected peripherals, be it ATV remote, trainer, speed or cadence sensor, HRM, power meter…etc

I occasionally get it whilst running, it’s my cadence sensor causing it but analysis shows it’s such a brief disconnect that none of the metrics are affected.

Unless you suddenly grind to a halt I wouldn’t worry too much.

Zwift Staff state this relates to a server connection issue:

the “Connection Disconnected” alert banner. This alert appears when your internet connection to the Zwift server has been disconnected for at least 5 seconds.

…which correlates with my not having a position number in the group.

This makes totally sense as everything apparently acts completely normal – no disappearing data from HUD, no missing fellow riders etc. I can go on as nothing has happened and after a while the message disappears.

The last time it happened was yesterday in a regular free ride workout, but it also appeared on TdZ stage 1, which I completed on monday. I’m not sure if the current position at the time was blanked out, as the ride was so hard (who said it’s not a race?

The message is a disconnect of one of your connected peripherals, be it ATV remote, trainer, speed or cadence sensor, HRM, power meter…etc

Thanks for your suggestion.

I’m leaning towards the information given from Zwift staff, quoted by @Otto_Destruct, as there’s absolutely no issues with metrics from my sensors when the banner appears.

I’ll also check the Wi-Fi access point in my cave - I have a distributed Wi-Fi network with multiple base stations in our home, making sure everything is connected to the same network, and the Apple TV in the cave may have connected to one of the other base stations (giving a weaker, more unstable signal) without me noticing it.

The warning has nothing to do with Wi-fi

It can be both your internet or your devices, and apparently an error communicating with Zwift servers that could spawn from your ISP or something completely out of your control it seems.

Isn’t it that the message when it’s at top left is supposed to be to do with sensors, and when it’s right across the top of the screen then in theory it’s a server connection issue?

I’ve had this a couple of times, only in the last week or two - both times in a heavily populated tour ride and other devices have been fine. All sensor still reporting as normal. Zwift used to be horrible in big rides regards server disconnects and I get the feeling some issues remain…

I used to get that disconnect message (top left) frequently when I was pairing to Zwift on ATV using the Companion app bluetooth bridge on my smartphone.

I now only connect/pair directly and I “never” have any disconnect issues (once, or twice maybe, in over 2 years?).

Just noting I received a “connection disconnected” message twice during today’s TdZ (10:00 eastern time, group A) using ATC and Wahoo Core. The only noticeable impact was losing the position indicator (—/xx). All other data continued to show (power/cadence, HRM), and other riders still visible. Ultimately, no big deal

I had a similar issue lately on quite crowded Tour de Zwft rides. Problem is in the latest rade this sateruday, I completed the ride without connection. All metrics were visible (HRM didn’t work though), but as I finished without connection, the ride doesn’t appear as achieved (the badges in the opening screen of Companion app).
I play an Apple Music playlist through a WiFi speaker on the same network. Will try to do with bluetooth; also try to fix that issue with my HRM which seems tro take ages to connect to Zwift…

After having this repeatedly in the last month I’ve now gone almost a week without the warning yet have made no changes to my setup.
I think Zwift may have made back office improvements.

I get this issue and have reported it to Zwift support. I have a 750MB fibre connection to my house in the UK. Having dealt with Zwift support the problem appears to be an issue that Zwift should address. Despite my internet working perfectly I get dropouts that ruin my races. The issue appears to be latency. The zwift engineer asked me to conduct a ping test with a server in California, United States. The latency was around 150ms, however Zwift say the latency needs to be 30ms or less. If I ping local servers in the UK and Europe my latency is <30ms. The feedback to Zwift is that this is a global app for home based domestic internet users and why should our experience be disrupted because I live in Europe and not in US. They need to fix this weakness in their app design which really impacts races and group rides, one disconnection mid race and your race is trashed, there is no catching the group back up. If anyone has a fix that I am not aware of please share. I have added all the UDP and TCP ports that Zwift suggested in my firewall rules with no change in unreliability.

Is your avatar stopping with the disconnects?

Hi, my avatar stays on screen but all the other racers disappear and leaderboard goes blank.

That’s classic behaviour when you’ve lost WiFi at your end.

It’s different from the connecting failure when you lose the pairing of devices or connection disconnect which seems to be when the zwift servers lose connection.

I’ve started experiencing this issue recently. Only occurs during group rides where I end up riding alone but after a few minutes automatically rejoin the group.
My wife riding next to me in the same group has never experienced this.
Appears more likely an app or server related issue/feature.
I’m running the Android and my Wife the iOS app.

I get this as well, as does my wife. Everything is still connected but the error message comes up all the time. I’m not streaming anything.

Both pcs are connected via. ethernet.

) it overloads the WiFi handling on said MacBook resulting in all sorts of strange behaviour. Bypassing WiFi and directly plugging the MacBook into the router so far has resolved the issue but is obviously not particularly convenient!