Sometimes (I’m not sure when) cyclists appear to “crab” sideways. Obviously its impossible to capture what I mean in a static photo (you’d need a video to show the motion) but the cyclist is either diagonal or oblique/side-on to the direction of travel and sliding diagonally or sideways in a way that is physically impossible.

Here’s one example from today that I captured, the chap on the TT bike was just sliding along at that angle. Since I’ve never seen my own avatar do this, I’m assuming that as far as the rider’s own display showed he would have been riding along normally, and this is only a bug in how third-party/other avatars are displayed. 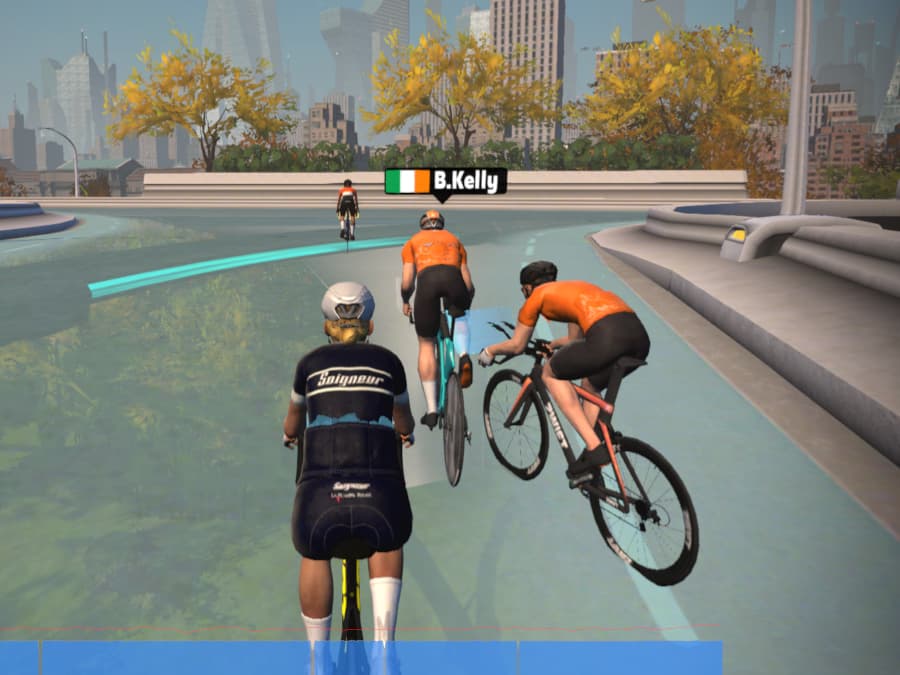 Join the club. We’re wasting our time, they’re only interested in game-breaking stuff and have an army of paying customers willing to not only put up with this crap, but actively defend it.

The plot thickens mate. Made legacy issues seem like just so yesterday.

Had this as well on one of my last trainings. His avatar looked like he had to put in extra more effort just to move forward.

Maybe someone didn’t got the memo … eerr code change …

I meant to ask, do you know if this is a “known issue” formally? I did have a look at the known issues list/forum and couldn’t see it there, but its hard sometimes because of all the different ways an issue can be described - if someone uses different words when describing an issue (e.g. “sideways” or “crabbing” or “strafing”) and you search for a different one, you can miss existing reports.

It would be good to get it added to known issues list if it really is something that keeps getting reported and not resolved.

Not formally. It was highlighted multiple times (and acknowledged) in the thread about Pack Dynamics 3.0.

OK thanks, Dave, appreciated. In that case can we get this logged please @shooj as a “known issue” and a ticket raised to fix please?

I’ve been saying some odd variants of this in the last build too (not sure if the same thing was present before or not) where riders suddenly veer wildly / erratically off to the side of the road at 90degrees going several hundred miles per hour and then suddenly veer back into the normal ride position/speed. Sometimes, they do a mini “loop”/reverse direction. Not sure if this counts as the same bug or if there’s something separate going on?

Someone seems to have mentioned this before in thread Riding in a circle? as “riders doing donuts” which is I think similar or same issue - Zwift reckon they fixed this in an update in 2021 (Zwift Update Version 1.0.63185 Released | Zwift Insider) but definitely have not - but is still present in Dec 2022 in latest build 1.32.0 (106182)

Is this one on the zwift known issue list please @James_Zwift @DavidP and any plans to fix?

I saw this again today, a cyclist was doing high speed donuts at the side of the road at an apparent speed of maybe 120kmh, in tight circles.

In another variant, I saw a number of cyclists join from a turn on the left, and crab sideways across the road, then vanish into thin air