Logged on for a pace ride today and immediately noticed something odd about my avatar camera view. I played around with the different camera position settings and still couldn’t get to something that seemed “normal”. During the ride, I started to wonder if it was just my imagination that there was something different. When changing between the different views there was a weird side to side bouncing effect that made me almost sick instantly.

After the ride, I looked back at screenshots taken during other rides. It’s clear that the default camera view 1 was previously showing my entire avatar several meters ahead of the camera and I can see the whole bike. 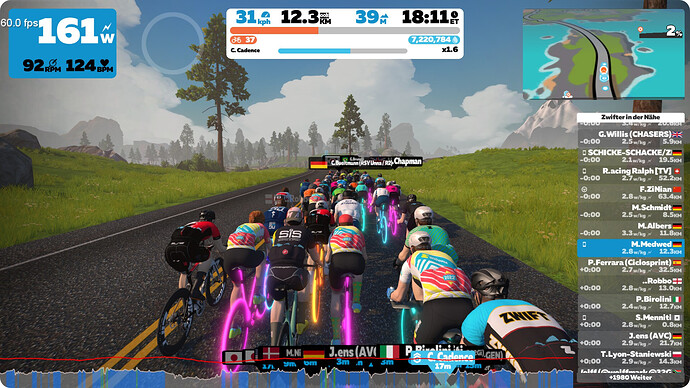 Now, in camera position 1, my avatar’s bike seat is nearly at the bottom of the screen. Camera position 2 is slightly closer, but not by a big difference. 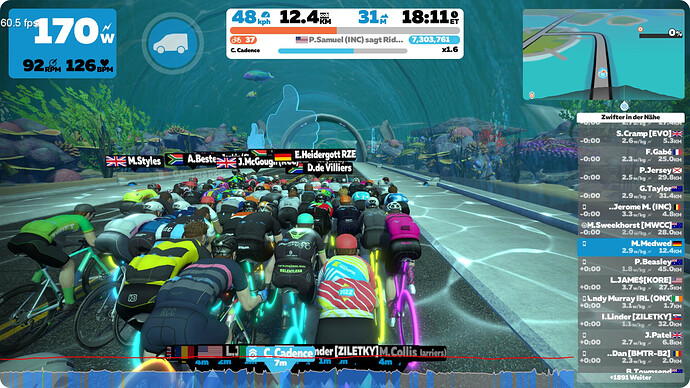 Anyone else noticing this, or was this just a glitch on my end

Its not a different camera view. Both screenshots where made with the default camera 1. It’s easy to spot the difference.

Mike, did your avatar stay consistently close to the bottom of the screen throughout that ride?
My experiences with Watopia C.Cadence before the recent changes, with the default view, would be of my avatar moving around quite a bit in the crowded churn and not staying the same distance from the camera (so to speak).
I’m hoping to grab a C.Cadence ride later this evening and can keep an eye on that aspect to report back.

Is it just when you ride with CC though?

My experience is it depends on speed - the 1st picture is 31 kph, the second one 48 - perhaps does it make the difference?

@Roule_Thoune The avatar stayed that way, fixed consistently. I couln’t even see my avatar pedaling, because I only say his big bu**.

Avatar moving around a little is common with pace partner rides, especially when the pack is densed like when riding with coco.

@Liz_J It was just this ride, AND the rides afterwards als long as I had Zwift running. I did a few test rides afterwards and the weird camera angle stayed that way through every other ride after this happened. I use Zwift on a PC and did a ride in the evening, therefore, I had to start Zwift from the closed state. I didn’t experience this near perspective, looked quite normal like it used to: 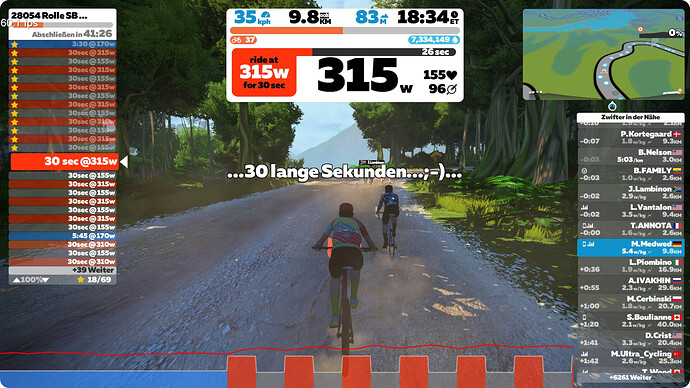 . This weird camera angle stayed so close for the whole ride, no matter how fast or slow I went. Switching from camera view 1 to 2 caused a weird side-to-side bouncing effect of the whole screen like beeing on a ship out on stormy weather.

I love those 30 second interval rides…

I’ve had this happen a couple times now in the past couple weeks (including today). No discernible pattern yet. When it has happened before, it has reverted back to normal the next time I am on Zwift.

Tonight was two different rides (Coco and a group ride) in Watopia, both had this “alternate” camera 1. Saving and going to the home screen between did not change it back normal. I cannot recall if I have tried changing world when this has happened in the past (maybe that would “reset” things?). All other camera angles seem normal but I had the same bouncing effect when changing angles too.

Windows 10 PC, in case that is helpful info.

That angle where the camera is cut off at the avatar’s backside is shown (as view 1) when you’re in the pen. Presumably so that you don’t see all the overlapping of other riders immediately behind you. Then when you set off, it goes back to normal distance.

My guess is you’ve come across some bug where it doesn’t spring back to normal as expected, and stays closer for the whole ride. Possibly because a Pace Partner is sort of an event with late join, but also not.

I’ve been able to make a video of the issue. Where can I upload and link it?

I can add my voice to this topic. I’ve also noticed this in my last ride. The camera was consistently closer to my bike during the whole ride, regardless of speed. It was a pace partner ride.

What default view? I have to reset it each time. I prefer the view ahead, as if I was riding an actual bike and every time I log in, I get a view from someone else’s POV, right behind me.

I have been bugging tech support about making the chosen view persistent across sessions…whatever you picked is what you get next time you ride. Any support for that idea?

For those noticing that the camera seems to be zoomed in more than it should be what device are you using for Zwift? And does it seem to happen on certain types of rides (e.g. Pace Partner, Event, Free Ride) more often than others.

Hi Lucas, it only happened during a pace partner ride to me and I had this view two times so far. When it’s happening, every ride started after this had this camera view as long as Zwift was running and not being restarted. Once Zwift is closed and reopened, the view changed back to normal.

Using PC with Win10 on it. Didn’t experience it with the latest Game Update so far.

I’m still seeing this every once and a while… seems to only happen when joining a pace partner for me. It doesn’t happen every time, but it is like something gets “stuck” with the camera view during the Pedal Assist bit and it never zooms out to normal. Similar to Mike, the camera will then stay like that in any subsequent rides/events until a restart.
Windows 10 PC here too and I have had it happen once since the last game update.

@shooj Here is the video of the camera bouncing effect when the issue occurs and then switching between camera 1, 2 and 3:

@Mike_Medwed
Thank you for dropping the video. That’s always helpful to see what you’re experiencing. I’ve let our team know about it.

Woah, that’s bad. I’ve not seen that, but I have been seing some odd camera behaviour when you first join the PP lately, so maybe it’s possible to get stuck in it.

Hello. Is there any updates on this bug? It’s happening for me on almost every ride now. It used to happen after finishing a ride and then starting a new one without closing zwift. Today it happened while riding Coco pacebot the first time and then every ride after.

Using a Samsung S9. Tried restarting the phone yesterday and then re launching zwift but same results.

Today I tried switching to the laptop with Windows 10 and again, avatar is stuck on the same view.