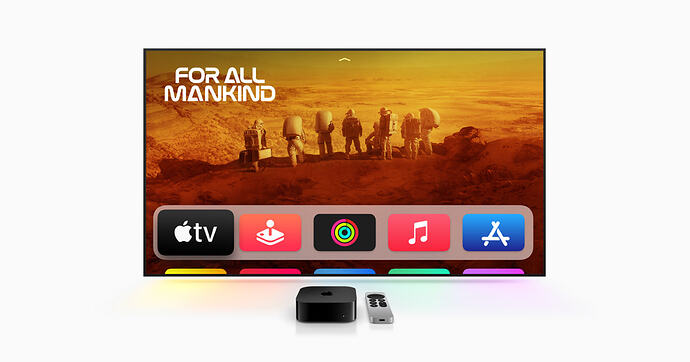 Apple today announced the next generation of Apple TV 4K — more powerful and affordable than ever, and offering impressive cinematic quality.

I’m happily using a 1st Generation ATV4k for Zwift most of the time but considering upgrading, even though we don’t know if it’ll improve Zwift performance. (Gen 1 to Gen 2 ATV4k did nothing for Zwift and may have even been a downgrade)

Big changes for this new one are the A15 chip, faster GPU.

If anyone’s an Apple expert, I’d like to hear them weigh in.

A15 devices have been supported by Zwift for over a year. It’s the same Basic profile at 30fps.

Whatever benefits might come with it, I would not want to be among the first users of any equipment, operating system, or drivers on Zwift. Let someone else be the guinea pig.

A15 devices have been supported by Zwift for over a year. It’s the same Basic profile at 30fps

Well, this is disappointing. The A15 has to be a lot faster than the A10X in the original AppleTV 4K, which is what I am using, but if there is no graphics difference in Zwift then there is no reason for me to upgrade because the only thing I use the AppleTV for is Zwift.

Not necessarily, at Zwift.

Zwift is a 3D video game. If you want better graphics, use the right tools for the job which is a Windows PC. If you’re not bothered about better graphics… why the interest in upgrading?

Yeah, I’m not holding my breath on this one.

The A15 is supposed to be a lot faster than the A10X so I’d hope Zwift would have a bit smoother frame-rate at least but I think I’m fine waiting a few months until GPLama has gotten his hands on one to test with Zwift.

This certainly won’t be a massive leap like switching to a PC with a dedicated GPU.

Zwift just uses a manual lookup table, if they thought the A15 was capable of 60fps there’s no real reason why it wouldn’t already be doing soon existing devices.

In fairness I can also understand why they are probably reluctant to introduce tiered performance across models with the same name. Zwift on Apple TV is sold on its simplicity and consistent experience, with visuals being the lowest tier possible and its frame rate being largely matched by the integrated graphics in desktop CPUs from 2013.

Wanting better graphics on Apple TV is a bit of a contradiction, given everyone says it’s great and/or don’t care.

Eric Min uses an ipad… graphics don’t seem to be as important to him as gameplay and social aspects of Zwift. I assume he influences the direction and what to focus on at Zwift HQ.

He used to use an Alienware Alpha R2 (the model with an AMD GPU…), and has been seen on other devices in screenshots since, including ATV. Dunno what his daily driver is these days.

Anyway decent graphics in Zwift shouldn’t be to the detriment of developing other gameplay features IMO. As a software company they should be capable of delivering both.

When you’re building a product it’s important to understand how your users’ desires, skills, and expectations differ from those of the product developers. The extent of testing can’t be whatever works for the CEO.

They’re currently stuck with a home grown game engine with lots of technical debt. New features are often hindered by that.

The new Apple TV will probably be of great benefit for Apple Arcade. Probably zero benefit for Zwift.

Zwift is a 3D video game. If you want better graphics, use the right tools for the job which is a Windows PC. If you’re not bothered about better graphics… why the interest in upgrading?

Well just apply the exact same logic that one would for a Windows pc or any other platform: there’s a new GPU that achieves almost triple the Geekbench score compared to the last one - and prices are going DOWN instead of up. Why would we not want to enjoy that power with a nice bump in our game performance?

I don’t understand your question. Anyone who cares about game performance shouldn’t consider an Apple TV for Zwift in the first place.

Considering the graphics of recent games on Apple silicon, it’s not strange that those users are expecting a bump to much more decent performance - they know it’s possible. I know that Zwift won’t get there any time soon, but users (Windows and Apple alike) should expect more. And if a hardware upgrade allows for more again, they should expect more again.

Huh? Apple TV runs Zwift on the lowest graphics tier at a low resolution and low frame rate. It’s the bottom of the barrel, and it’s evidently perfectly fine for many people. Nothing wrong with that. If they want more, they need suitable hardware, not a slightly faster Apple TV.

the graphics of recent games on Apple silicon, it’s not strange that those users are expecting a bump to much more decent performance - they know it’s possible

Like what? I’d be interested to see it because from what I’ve found, even the best looking games on all of Apple Arcade are barely any better than Zwift. You seem to be vastly overestimating the ability of the Apple TV to produce detailed 3D graphics at high frame rates. It’s a media consumption device, with quite literally the power of a phone.

Not sure how you could argue that the availability of better hardware should not result in better performance.

Doesn’t matter whether it’s a 5k to 15k geekbench score for your new atv, or a 15k to 50k, or any other upgrade through whatever means - on whichever platform. The old one did X, the new one is three times faster, so why shouldn’t X run three times smoother or prettier?

Mainly because we’re talking about Zwift - a bespoke, cross-platform game with fixed boundaries for graphics - and typically performance just doesn’t scale as linearly as it may do in a totally separate benchmarking app. But also because even a massive theoretical percentage improvement to a small number is still a small number.

The whole point of Zwift on Apple TV is that it’s a simple to set up, self-contained box which provides a consistent experience, with locked down visuals and a frame rate that most people are fine with. It’s essentially an iPhone with an HDMI port instead of a screen. If anyone wants more than that they need look elsewhere.

This exact same discussion happened before the 2021 model was released.

OK guys, I think we’re talking past each other here.

We can all appreciate high-zoot graphics. Zwift on a gaming PC looks nice. We can also appreciate a PC that fits into a hockey puck and fires up in seconds.

I’m not giving up the convenience factor for the higher level graphics; some people are just the opposite. If we could have both for $150, we would.

We continued the discussion on PM and it was perfectly amicable. There was no need to slow down the thread to censor the replies.

Oh and any decent PC boots in seconds and is just as convenient to use (if not moreso given the lack of restrictions), but that wasn’t the discussion we were having anyway.