Zwift Performance: Driving me to cancellation

Looks like Zwift support deleted my thread or it vanished into thin air.

My game constantly freezes for 3-10 seconds at a time and uses 8GB of vram while running. I have tried ant+ and bluetooth, 3 different smart trainers, power pedals and 3 heart rate monitors (although 2 are the same type/brand).

I was asked to post to zwiftilizer which I have now done but I’m unable to post links here… How is anyone supposed to find it? (It doesn’t highlight any errors, no dropped connections and any rxFails are <3%).

How is it that competitive software runs perfectly smoothly with zero issues, AAA games run perfect (although this isn’t a gaming machine anymore) and zwift struggles and freezes constantly? 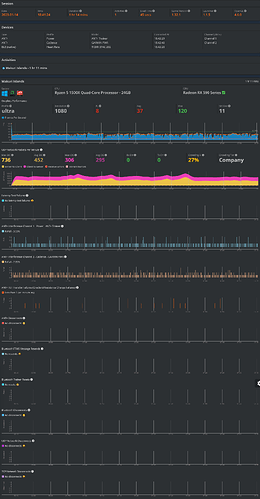 It also has to be said that when zwift is running at the main menu the game lags the system so hard that I can’t move my mouse for several seconds at a time. The entire computer becomes non responsive when zwift is open at the menu screen and literally perfect otherwise or running other software.

I was having similar issues, though not as extreme as you and all I had to do was upgrade my ram. I had one 8GB and replaced it with 2 32GB sticks and it runs like a brand new machine.

I reinstalled my GPU drivers using the “pro” edition workstation drivers… the first run was better (no such issues as before). I hope it continues to work though.

The 8GB VRAM is the graphic card ram, which is quite high for 1080P, even for 4K content.

@Ryan_Gaudon There’s a way to share a link to your Zwiftalyzer results. Once uploaded, click “Share” then “Get Link” in the dialog box that pops up. 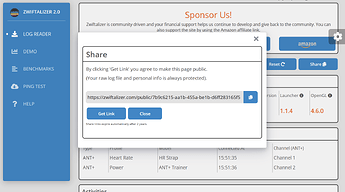 TL;DR: I suspect it’s something driver related. Poke around this thread: Crashes with AMD Radeon graphics [MERGED] [SOLVED] - #208 by Paul_Southworth

I was able to get the link, but you can’t paste links on these forums was the issue.

It’d be really nice if Zwift would take the time to add Vulkan API support which would make it a lot more accessible for a plethora of reasons.

Make use of the M1 processor on iPad Pros Feature Requests

It’d be really nice if Zwift would take the time to add Vulkan API support which would make it a lot more accessible for a plethora of reasons.

Moving their graphics layer to Vulkan would be non-trivial to say the least, unless you mean using an OpenGL emulator on top of Vulkan such as Zink of which the current implementations are Linux only as far as I know (if starting Zwift from scratch using Vulkan would be optimal as it provides much better performance and is supported directly on Windows and Android and on Apple using MolteVK).

How are the updated drivers working for you?

I have read that AMD made some major OpenGL improvements recently and was wondering if it fixed the zwift issue?

I am getting tired of the crashes on my laptop (apparently a known issue with my specific integrated graphics) and am shopping for a egpu setup. AMD cards are waaay cheaper than nvidia on the local used market so it would be great if they actually worked now.

They worked initially, but upon reboot / system sleep they seem to still have issue occasionally. It seems to be inconsistent with each start up of the zwift application. Sometimes I’ll boot the game and the main menu is difficult to navigate because of how skippy it is and other times it’s fine.

I took the RX590 out of that machine last night, used DDU to blast away the drivers and replaced it with a spare EVGA Nvidia GTX 980 4GB card. Installed the latest drivers through geforce experience and booted the game in spectate only as I wasn’t riding.

It seems like it might be marginally better, but has a different type of hitching/skipping to it now even on the nvidia drivers.

So I guess for now my answer is still unfortunately inconclusive.

It isn’t trivial for sure, but a number of companies have done similar rendering translations as vulkan continues to gain popularity with (generally) very positive results. I realize this isn’t a $0 investment to take the engineering time to do it but it would be hugely positive to a number of people running their software on linux, pc and mac.