I just did a short ride on Watopia - Road to Sky just up to turn 20 and back down to the entrance gate to the Alpe section. Everything worked fine. No app crashes and the elevation was added to my Everest Challenge total.

A common factor with the crashes might be riding in France. There wouldn’t be a lot of crash reports because France wasn’t scheduled today. It did affect me (on a group ride) and you guys in the thread because you’d used ZwiftPref to access it?

Another multiple crash at a repeated spot in France…

Two goes for Rebel Route: Toutes les Routes this morning, two crashes in exactly same spot after 21 mins of riding. Get everything ready for big ride, be ready mentally for it and then this happens… twice. So frustrated.

After the last update ZWIFT crashes every time.
I ride in France the R.G.V route and every time I get to 14.8km it crashes.
This has happen every ride for the last 6 rides.
I deleted ZWIFT and reinstalled still the same
I’m on Windows 10 gaming laptop 2020

second time within a week that Zwift crashes when I try to save and upload the activity. In both times I was in aa pace partner session for a warm up for a race, then I was running the race and finally it crashes before uploading the data. That is rather disappointing.
Both times it was an event on the Zwift calender. I am running Zwift on a Macbook Air. So far I never had troubles with crashes. I have the feeling that it is connected to the pace partner session, but it is just a guess. I hope you guys find a solution soon. Thx, Best, GB.

i was also i. france in a meetup when i had 3 times zwift app.exe crash

i m running zwift on a laptop with windows 10

It looks like a problem with France and Windows 10. I’ve loaded the relevant FIT files from the Activities folder into TrainingPeaks. As these are only saved every few minutes, it’s a bit inconclusive if it was the same crash location exactly or not… 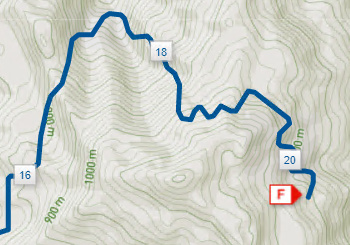 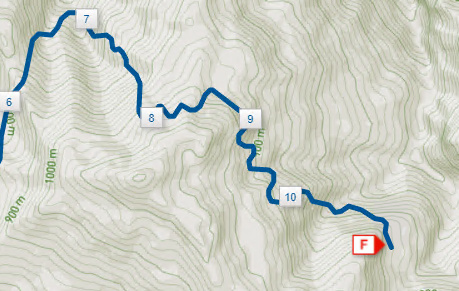 Can anybody else load their FIT files from the crashes into TrainingPeaks (or Strava for that matter) for comparison?

Ill try and get log files etc tomorrow. However, I was in France also, on one of the 22mile routes just riding solo when it crashed after 10 mins. The crash was screen freeze then just disappereard, OS is Windows 10 and the app had just updated. The update seemed to have performed but loading took a very long time, when it seemed to quit. Upon starting again, it said updating again but got past this quickly and the app loaded fine but lead to the crash above. After the crash I reloaded and chose the other 22mile route (reverse of the first?) when it crashed after 25 mins. After that I gave up.

Ive been contacted by a support agent directly so will share the files with them when I get them tomorrow from the zwift PC.

I have crashed twice . Windows 10. Most recent was Watopia. I was doing Red Unicorn as part of Build Me Up - 37 minutes in. Don’t recall where I was with the first one. It was the first crash I had so thought I had unhooked a cable or something

Windows 10
I had just updated the App on Friday the did
Road to the Sky, it crashed about 200m from the top of the Alpe on my 3rd climb
No Zwift 1,2, files etc In my PC

On Saturday I logged in again, it did another update on the App - no issues.

I have just logged in now on Sunday, it Just did another update …

Using Windows 10.
Crash occured on the France map during a social ride. Graphics flickered, some textures just went grey. Text in the “distance hud” became gibberish. The crash happened the second time entering the area. First time round was only the described glitches.
Lots of people on the same ride had the same “glitches” and several crashed. Some crashed more than once, but was able to rejoin with latejoin. Event was DBR Social Ride, Sunday 9:55 CET

Crashed twice in the DBR Social Ride today on Douce France in two different spots. In both cases the balloons came into sight and then Zwift became ‘not responding’ and crashed.

No problem with the update (don’t see multiple folders)

Had a “near crash” on the DBR ride with @Morten_Jarlund and @Jesper_ZwiftHacks, my Win10 didn’t crash but got the weird graphics, massive drop in FPS and my power dropped from around 200 to 50 watts.
Got a screenshot… 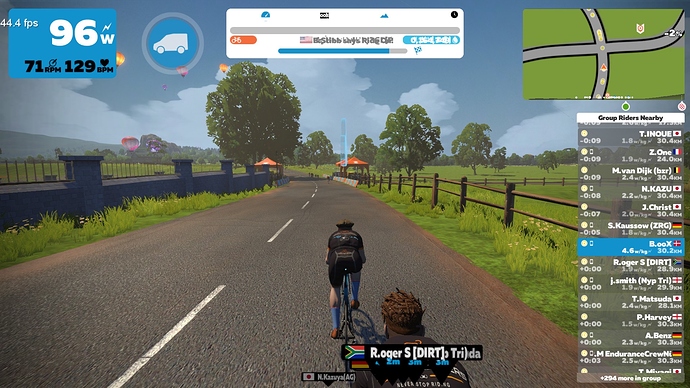 iOS 12.4.8 - iPad Air w/32gB
At just before noon on 9/5, was warming in the pen for the Herd Summer Race League B Race in Casse-Pattes, and the game crashed about 20 seconds before race start. Disappointing, since it takes longer than that to get into Zwift on that tablet.

I started the app again, signed up for the A race on the companion, the race started, and a few hundred meters after the race start, crashed again.

Five hours later (9/5/2020 @ 5pm Pacific), after powering off/on the tablet, making sure I had the latest version installed, etc. started OK in the B race, and crashed a few hundred meters after start.

I don’t recall whether I tried the A race, but needed to exercise, so did the UCI Richmond course for 20km, with NO problems whatsoever.

What would be the best way to have some assurance before I try the next race that it won’t crash? Try a different French route?
thanks!

I experienced three crashes today before I gave up. All occurred after just a few minutes.

First crash on tempus Fugit
Others at Watopia Flat
Third in the start box for KISS 100 America.

BTW how do I access the ride data so that I can update my strava?

Something went a little scewy when somebody architected zwift, how else could you ever end up with such a crap GUI?

BTW how do I access the ride data so that I can update my strava?

Look in the Activities folder, there are some FIT files (which may be missing the last minute or two before your crash). You should be able to manually import these into Strava.

Another useless 'update' ,another issue
next page →