The number of kilometers to the end of the lap shows an incorrect value.
it is 0.3km and then <500m 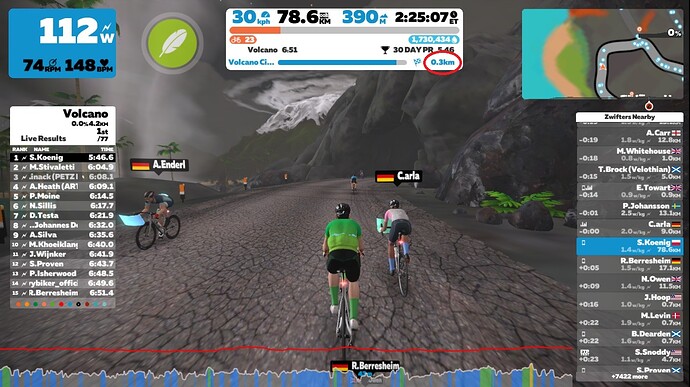 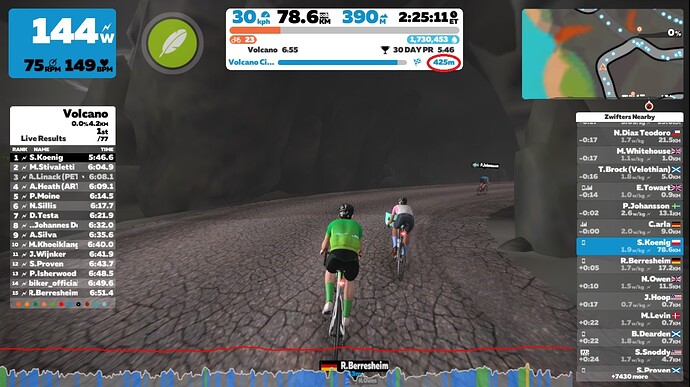 Thanks for bringing that to our attention!

I’ve checked with the team because that does seem inaccurate. I’ll do my best ascertain if this is a known issue. If it’s not, I’ll work to get some attention on it. Thanks again!

Just following up with you to let you know that I flagged up this issue to the team, and we’ve officially got a bug report in for it now, which means Zwift’s developers will investigate it. Thanks again for letting us know about this issue; it’s appreciated.

Just wanted to say I’ve seen this too, and both times it’s happened when I’ve finished a TdZ event and selected to go back to the world I was in pre-event. Both times it’s put me back in the world I was in, with the course I was following (the one selected in the menu screen before the TdZ event), but in reality I ended up following a different course in the world while the lap distance in the blue bar was for the original course and was very wrong!

I’ll start a new ticket is this is completely different to the OPs, let me know. I’ve got a few screenshots.

Thanks for bringing your issue to our attention.

Best I can tell, what you’ve described seems a bit different than what was described in the OP. So, I’d suggest you send our team a support request, include a detailed description of the issue with any screenshots and/or video you have. We’re happy to investigate that for you!

You can reach us here.

Hi, I can’t seem to reach support via online chat and it’s closed for most of the day for me anyway (in the UK). Happy to create a ticket if you send me the link for that. Thanks.

The other issue has been reported already here.

The other issue has been reported already here

@Maryka_Sennema – Did you see what Arend said? Seems this issue might be the same as yours?

If you’d still like to contact our support team, that previous link I provided you is the appropriate one. You can choose the option to start a chat, and the Solvvy bot will run you through a few possible options. Just select “No” for those, and you should soon after get an option to either “Chat Now” or “Email Us”. Choose the email option.

If you’re still not able to send us an email, let me know and I can get one started for you. Thanks!

Yep that’s the same issue I have. I did have a look for it before jumping on the more recent thread. Sounds like it’s fairly common.

Yep that’s the same issue I have

Understood. I’ve updated this Forums thread to include the same bug report number for added visibility. It looks like this was bugged up a few weeks ago, so the issue is with our developers now. Thanks again for flagging it up!

@Steven_D
The problem also appears on “Roule Ma Poule in France”. Reaching the end of the stage, the distance is already 0, but this is not the end of the lap. After a while, the counter shows the value for the rest of the lap again.
I have a problem with uploading photos.

Thanks for letting me know that the Roule Ma Poule route is also impacted. I’ll be sure to mention that to the team.