Unable to create Nth event on a given day 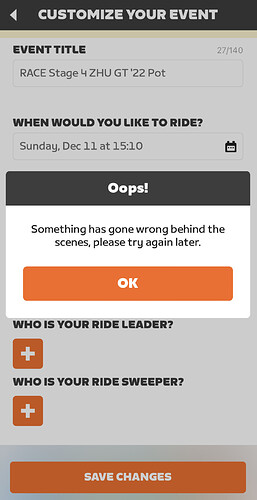 you might be better emailing the events team if you don’t get a answer here.

Are you 100% sure the events haven’t been created? I was trying to create an event this week and kept getting the same error. Checking back later I had about 14 events created

You can also try doing it through the Web portal. Generally if something doesn’t work I the app it will work there and vice versa.

Buggy AF but it worked in the end.

Hi, yeah, in the end I’ve ended up with the events team today morning, sending them the details.

Sadly yes, I’m sure. We have tried with other admins, and they couldn’t create as well, and no events in the Club Calendar so far (for the times I did try to create). Also tried today morning (like, 18 hours later), still no luck. Anyhow, I’m now in touch with the events team.

An FYI for all who is following the topic - I’ve got confirmation that within a given time frame there is a given number of Club events which one could create. For example, I’ve created 10 events, 8 was between 9AM - 11AM, and two was at 5PM and 5:15PM, and I had to schedule the next event to 9PM, otherwise it was the above mentioned error message.

Useful to know, thanks

I wonder if you can create 1 event per day and later change to the same date? Could be a workaround if you need more events

I’ve tried like 4 or 5 permutation to go around that rule, and no, you can’t. At least I couldn’t XD