I’ve also noticed some riders whose entire current race history and ranking stats are based upon “live data” rather than fit files.

Why would this be and does it have any bearing on their ranking score?

I’m trying to understand the net effect of Private vs Public when saving an activity and how it ends up in Zwiftpower. A random example below (2nd row). What set of settings in which modules (Zwift vs ZP etc) yields hidden weight, age, HR, height, but still goes to ZP with Blue lightning bolt, and all of the actual power data is still available?

Also, is the little heart symbol in the Avg/Max columns indicating that a HR monitor was used, or not used (vs. those fields just being blank in row 1)?

I thought I’d create a separate topic but it got moved here just above… oh well. My query wasn’t specific to Zwiftracing.app though but in general for anyone/everyone to understand. Seems like a interesting meeting-halfway option to hide personal data (age, weight, height etc) but still enable full power recording. Blue and not green lightning bolts.

well, there is the ability to save your activity as private within zwift, but there is also a separate and unrelated option to make your HR/age data private on the zwiftpower website itself which would probably still generate a proper power file. i’m not sure if looking at their power log would still reveal their HR data in that case but it would show their power.

now that zwift owns zwiftpower and it has ceased to be a community project, i wonder if any of these weird quirks really need to exist in the first place, but it is what it is.

Pretty sure Live ZP data only updates every 30s, but your FIT files will likely have 1s data in. I’ve seen my power numbers change after the lightning bolt goes from green to blue. Not by a huge amount, but if you’re near the boundary it can be enough to make a difference.

In ZP, there’s only a checkbox to allow showing your HR or not.
In Zwift, the only option you can turn off is displaying age.

No preference settings in either place that I’ve found for weight or height.

Edit to add: With profiles that show the little heart symbols, the full HR data is available within their ride reports… so that seems an option to not be DQ’d (?) from events that ask for HR monitor, as the data is still recorded.

The 30 second update sort of makes sense. For me generally the 20 min and 5 min figures don’t or hardly change.But if I put in a sprint effort the 30, 15 and 5 second figures change by quite a lot.

@xflintx I am just an old fart and get this kind of race ranking from doing 4x6 km races. On ZR I actually decreased my ranking because of the fourth race where I didn’t know where the finish was, which I find reasonable. Please don’t make the ZP ranking the standard! I’m way out of my league with regard to ZP ranking now. 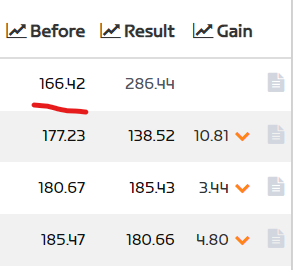 @Gerrie_Delport_ODZ you’ve merged a topic in that has nothing to do with ZwiftRacing.app rankings

The current ZP system is not ideal - far from it.

We may well end up with a ZP style ranking system - how would you like to see your ‘result’ of 286.44 have a bearing on your other 46 race results from the last 90 days?

We may well end up with a ZP style ranking system - how would you like to see your ‘result’ of 286.44 have a bearing on your other 46 race results from the last 90 days?

As I said, the system does not know why I got a “low” ranking for that race. We will get good points from the races where we excel and low points from the contrary. With just one ranking I can live with the ups and downs in ranking. It will end up being an “average” ranking. The problem with ZP ranking is that I keep the ranking even if I perform under par.

Yes in ZP you keep the ranking with a bad performance but that doesn’t have to be the case.

In ZP, I believe, there are two parts to the system:

We may well end up with a ZP style ranking system, when we both may wish for a ZR system. I just wish we had some input into a ZP system if that is what we are going to end up with. ( Without possibly having to sign up to a confidentiality agreement )

With only one ranking, you will always have the problem with racers who are only racing to their abilities. They will not fit with the “all-around” ranking. Their ranking will be inflated. If you are one of those specialist racers and are racing races where you have an advantage and are racing against racers who got their ranking from other race “types”, you will get ranking from other races in an “unfair” way. Your ranking will be “wrong”. You don’t fit in with the ideal rider (according to the all-around ranking) who races all kinds of races.

I’m not sure separate rankings is the way to go. I believe your ranking should reflect your ability in the style of race you are best at.

To have more than one ranking suggests, to me, that I want the ability to be there at the pointy end of every race. If I can’t climb I want a low climbing ranking so I can be there at the end etc etc.

So everyone, including me, is there at the end of every race no matter the terrain or distance. And guess what - who is going to win those races - the best sprinter who can finish with the best 1min, 30sec or 15 sec power because their ‘terrain’ ranking gave them the ability to be there at the end.

You are talking about spitting by ranking. It will just be a good mix of riders getting their ranking from different kinds of races. If you want to put apples and oranges in the same bowl, that is the way to go. Sometimes you want to really put the best climbers in the same race to find out who are the best at climbing. Not just prove that climbers are better at climbing than sprinters.

EDIT: Splitting by an all-around ranking will certainly make some riders shine and others get dropped. Fun for some, but not for the rest.

EDIT2: If pens are spit by other metrics/limits, the (ZP) ranking will be more evened out. You still have the problem with racers only racing to their abilities.

So I’m thinking the question is now how will rankings decide fields?

What are their general ‘all round’ rankings at the end of their 10 races each?

You then put on 4 races at different times so your 20 riders can enter as many as their ranking permits.

Each race has a maximum of 10 that can enter from the original 20 riders. Your riders enter every race they are permitted to enter. They get two races each, one flat one hilly.

Now I thought I was doing well in my reply to you but I have come unstuck in my final conclusion!!

I think your point is that I’m a 190 point ranked sprinter but I want to enter a hilly race. If races are split by ‘all round’ ranking my only option is to enter the hilly race for ranking 150-190. But this will be contested and won by riders whose 150-190 ranking is based on climbing not flat sprinting. I am going to have no fun and no other options in hilly races.(I can of course try and beat the other four, out of category, competitors and gain ranking? )

But what to do:

Is it fair to allow me, a sprinter, a poor climbing ranking so that I can race and be there at the pointy end and probably win the sprint, even though it might be uphill.

How would you feel if you were a fairly poor climber like me but with no sprint. You probably never get to win. I might get promoted to next rank up but I will probably be back down in a couple of poor races to win again. And if I’m not there some other sprinter will be there.

So in summary how are non sprinters going to win races if you let sprinters be there at the end of every race?

Should we have separate ‘terrain’ and ‘distance’ rankings or should we have an ‘all round’ ranking which possibly allows climbers, endurance, TT etc racers a chance in the events they are better at ?

I don’t know - just some late night thoughts and ramblings.

I don’t know - just some late night thoughts and ramblings.

My late-night ramblings were triggered by the thought: What if Zwift implemented ZP ranking as the new standard (enforced) way to split racers into categories? I looked at my ranking and saw that it improved when some special conditions were met, and as long as I race often, I would steadily improve my ranking. Now it is at a point that does not reflect my abilities at all. If my ranking was used for categorization, I wouldn’t have much fun racing anymore.
I like the new ZR ranking, where we get a reduction when performing under expectations for a race. That way the ranking becomes a kind of average of all my race performances. I will always get a reduction in races with climbing and that is OK as long as I get some increase in the races that fit me better. It has been very stable the whole season for me, and that matches my observations that I don’t get better or worse. I do the same unstructured training I have done in the last few years.
I think the ZR ranking will be much better for splitting into pens in more races than the ZP ranking. Especially for leagues, but also for other non-specialized races.

It’s not for nothing that you see a lot of highly ranked riders doing the Tiny Races.

4 results in an hour. But they are wickedly good fun and great training too.