I still have the old version of zwift

I’ve don 50% and have only been credited the socks. It seems when I do the routes on the tour - without group ride, it’s credited in % but nothing in my garage- please zwift people- sort this for me???

I don’t think I received anything other than the socks until I completed the 4th stage (2/3s done). I received the visor at that point then the kit upon completion of all the stages. Cheers!

Sometimes new items do not appear until the next time you log in.

I’ve completed Stages 1 to 5, inclusive, showing “83% complete” and have unlocked the Glasses, Visor, Socks. I suspect you won’t get the remaining items until you’ve done more than 50%.

@_Trish_Le_Court_De_B : when you say you have an old version of Zwift, is there a reason you havne’t updated it? You’ll need one of the more recent versions to see the latest routes, included with the Urukazi expansion.

EDIT - just finished the last stage and, as with the others, the instant I crossed the finish line and got the “Stage Completed” confetti, I received an email from Zwift notifying me of the unlock. 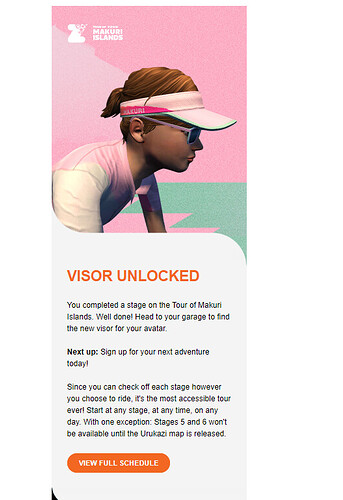 You didn’t get the glasses?

Don’t think so, what stage unlocked those

I think that was the first one.

Now that I think about it, it was the glasses I got after stage 1. I got a visor after the 4th stage, but I also jumped around and did not do the stages in order so that might have altered things a bit. Cheers!

me either, I still have stage 2 and 4 to get… no visor yet however.

My guess is that you have to complete stages 1-4 to get the visor vs simply completing 4 stages (?).

All this got me curious as I could not recall the exact order that I rode the stages. Looking back at my history, I did the stages in the following order: 1, 2, 4, 5, 3, 6. I received the visor after completing stage 3 (my 5th stage). My earlier recollection that it was my 4th stage was incorrect. My apologies. Cheers!

Hi, yes keep my zwift account updated always, hubby has the new version, but me no…

Are you on android or an old laptop? they don’t have the new Home screen.