This afternoon I got a Connection Failure message across the devices top left. Except it didn’t look like this 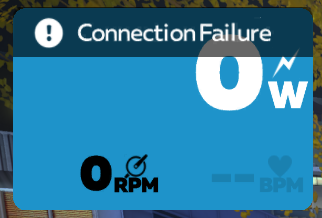 since all my devices were working properly. It was only when I started to feel a bit alone in the world that I realized that my computer had lost the network connection (my ISP sent a text message later about a fiber being cut nearby).

According to the release notes of this feature:

Added a notification to inform Zwifters when they lose connection to their ANT+ or Bluetooth device, or the Zwift servers.

I strongly recommend to split this message into two different messages in two different places since these are two very different failures; one message for Device Connection Failure (ANT+ and BLE) and another message for Network Failure. There is little to nothing in common with these two failure scenarios.

I think the network connection failure message is already ever so slightly different, in that the grey bar runs the whole width of the window. (That’s at least what I got the time I decided to reboot my router after already entering a world…)

It is possibly slightly different, but if so then that difference was completely lost on me as I was riding.

It took me quite some time to figure out that the message was telling me in this case that there was a network failure. It was only when I realised that I was suddenly alone in London that I looked at the network status of my computer.

Not sure why they cant change the messaging to be a bit more obvious. Maybe the change related to a few people complaining about clicking the msg and getting the pairing screen when it was a network issue, which the pairing screen had nothing to do with. All very unintuitive UX that with a bit more effort would have been a really good win.

All very unintuitive UX that with a bit more effort would have been a really good win.

I would think different wording will be in order.

They should also add the ability to dismiss the message, esp. if it were moved to a more central part of the screen.

i think Heart Rate failure could be a good warning to have!

at least NOT take you to the paired devices when it is a network connection issue, as it stops you dead in your tracks for no reason.

Agree with this. Would be super nice if it would say what had lost connectivity.

I would think different wording will be in order.

This is very much needed.