I’m trying to optimize Zwifting-setup for longer rides. For shorter rides, I tend to use “only zwift” without getting bored. But on longer rides, I really like the addition of netflix, or something like it, as an addition to the zwift world.

These days, I’m rocking a solution with two screens, and two computers, but I would really like to simplify setup a bit. In addition it would be really helpfull in the process to de-clutter the homeoffice a bit, getting rid of some screens, dockings etc., as the screen would double as the screen i’m using when im working from home.

What I’m thinking is some kind of ultra-wide computer-monitor, and splitting the screen in two, using one half for Netflix in full screen and one for Zwift full screen. Are there anyone with experience with this kind of setup, and how it should work?
Do you have any kind of advice in setup or screens to avoid?

What I’m thinking is some kind of ultra-wide computer-monitor, and splitting the screen in two, using one half for Netflix in full screen and one for Zwift full screen.

This can be done, but wide monitors a pretty expensive, I would rather by 2 cheaper screens and use it on one pc. Or get the nice wide screen for working from home and a chep second screen for the Zwift pc.

I run 3 screens on my Zwift Pc with no issues.

Tacx tablet mount for handlebars and use a tablet as one screen.

Alternately, if you REALLY want stuff on one big screen, simply buy a double-wide screen with native support for dual-input “split screen”. From my little experience, these are typically very high end, very expensive monitors but they are, effectively two screens in one. You’ll need separate source devices - Roku or AppleTV4k for one to stream, and Zwift device on the other. (ATV4K also runs Zwift - frankly, I like the simplicity of it - no keyboard or mouse required)

These days, I’m rocking a solution with two screens, and two computers,

can you not use two monitors with either of those?

Problem is both my work desk and the trainer desk will be quite narrow, so the single base would be quite awsome. But hearing you guys I might have to reconsider my options. Unfortunately, a wall-mount is no option for me. What I was thinking was something like a LG 35" Curved 35WN75C as that would be an awsome solution for a home-office setup, but if thats not a good solution for my zwifting as well I might as well try something else.

so the single base would be quite awsome. 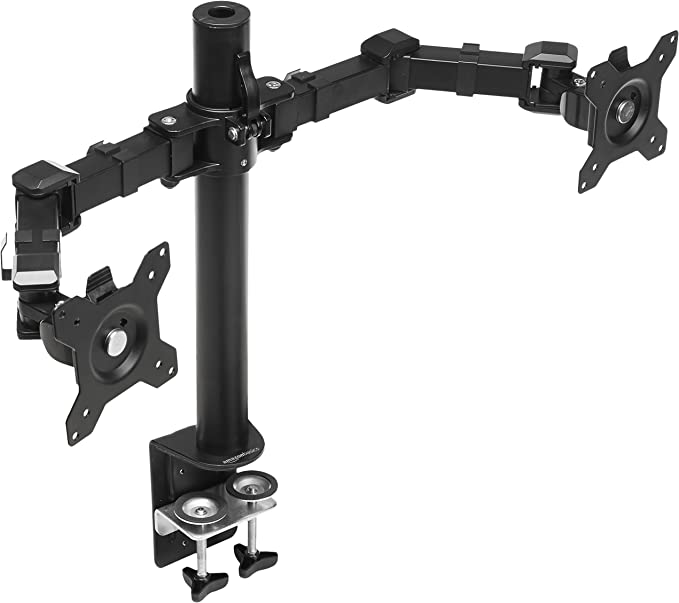 Something like Gerrie posted would work that’s what i have desktop with two monitors on a dual arm base that i swing one of the monitors around to the bike next to me for Zwifting.

That could potentially work, even if its a bit more hassle than just unplugging and moving a screen between two desks.

O I do not suggest moving that monitor stand around. My idea was you keep your current 2 screens on the monitor stand and get another screen for working from home, that will be cheaper than a super big curved monitor.

Turn your Tablet into a Monitor: Splashtop Wired XDisplay

Use Splashtop Wired XDisplay to turn your iPad, Android tablet, Kindle or smartphone into a high-performance second display for your computer. Connect your device or tablet to your computer for a second monitor!

I have used it on really old android tablets and it works great.
If you do might be easier to put a tablet somewhere on your current set up than moving monitors around.

I have also used that app to run zwift on when i had a pc in a place that i couldn’t get a monitor for a temporary set up. it is great as it turns your tablet into a touch screen monitor so no need for a mouse/keyboard to zwift!