We each have our own separate paid monthly accounts and user setups.
But we only have 1 pc (desktop Windows 11 with 2 screens).

Are we able to run 2 x Zwifts sitting next to each other using 1 monitor at the same time?

No, sorry, that’s not going to work. You need to run Zwift on separate devices.

Takes a bit of messing (and results will depend on the hardware resources you have available) but it’s possible: https://www.reddit.com/r/Zwift/comments/qnpevs/how_to_run_two_instances_of_zwift_wseperate/

On the same monitor? (Edit - now I’m confused about the mention of “2 screens” along with “1 monitor at the same time”)

I was also answering with regard to Zwift supporting them when they have problems.

Oh it’s definitely not ideal, but should work fine. OP says they have two screens, I assumed they meant one each. But even if not then it works using windowed mode so should still be possible.

Not easy for the technically challenged but on same PC, you can do separate accounts with sandbox solution with 2 monitors.

I could ride with my son at the same time and share good memories on Zwift. 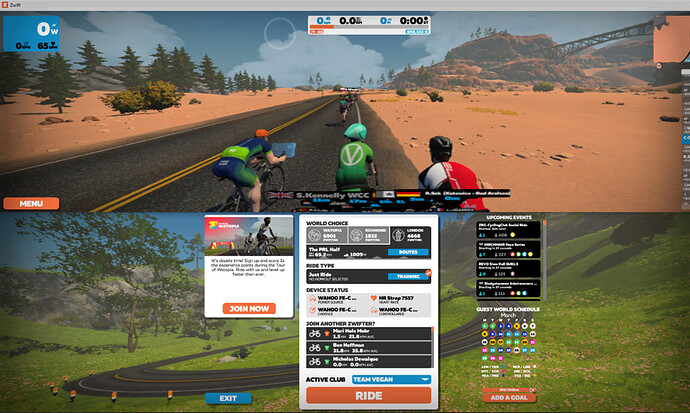 Two smart trainers but only one TV?

I haven’t tried either of these solutions personally, but on the face of it I would agree with the Reddit poster that using the user accounts method is more elegant (though not necessarily easier to initially set up!) and should use less resources - which is important when you’re intentionally doubling the load.

I have used Sandboxie on a laptop with Nvidia Gtx 1650 without any issues…wheb i was using OBS for streaming FPS where droping. The only problem here is you can’t use BT on both instances of zwift.

only problem here is you can’t use BT on both instances of zwift.

oh this is a good point, how will both trainers connect to the same PC?

The same way a PM and trainer connect to the same PC ?

I would assume you will need two ANT+ dongles.

The same way a PM and trainer connect to the same PC ?

That’s probably an issue with the Sandboxie software?

I still think this whole thing is a Bad Idea. Zwift aren’t going to help you if you run into trouble. Fine if you’re an advanced Zwifter who loves tinkering with PCs though.

You need 1 Ant+ and 1 BT connection or 2 Ant+.
You need to pair 1st via Ant+ on sandboxie and after turn On BT for normal zwift. Not so easy but once you get used to the order it’s clear.

What I’ve done in the past is create a meetup with “keep together” selected. One of us runs Zwift from our phone and only pays attention to it for power output, etc… The other runs it from the computer and since it’s a meetup set to keep together we’re both on the screen together. It’s not ideal but works pretty well.

Heya
We got it working in the end on sandbox yes. 1 pc with 2 screens, I use one running normal and husband uses the other screen using the exe through sandbox.

Were just hoping for a better user experience, perhaps expected too much from Zwift

Happy that we are able to, pity that the app is not geared for family setups like ours and thus the need for a sandbox setup.
PC resources was fine for us as our screen card and box is also used as a gaming machine

We got it working in the end, please see my reply to Dejan.