NOTE: system/pain-cave config posted at bottom. Suffice to say: “they’re up to date.”

I’m suspicious it’s related to the “screenshot bug” affecting some other systems. I didn’t take a manual screenshot but there’s an auto-screenshot when crossing the event finish line and it clearly shows the missing sensor data. 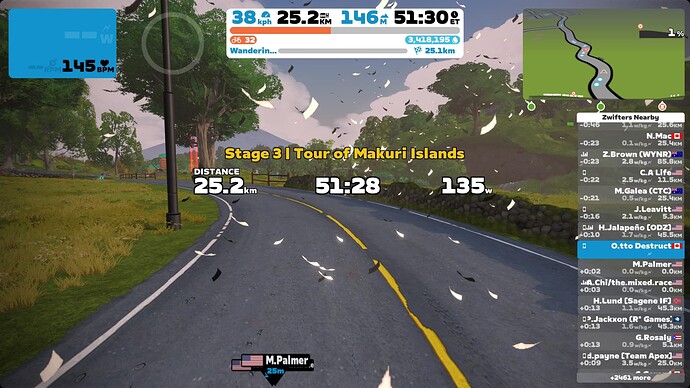 Apropos of nothing, your GPU isn’t strong enough for 4K. You’d have been at 60fps throughout that ride on 1440p.

Yeah, I hear you. I’ve gotten used to 30fps on the ATV4K so I don’t mind the hit in frame-rate for the higher res when using this system.

Give 1440p a go, it doesn’t actually change anything you see other than being slightly less sharp. Appreciate not everyone cares about 60fps though.

Sorry for the off-topic posts anyway. It does seem weird that a dropout would occur right at that point, assuming it’s normally solid for you.

Np! I will give 1440 a go next ride. My concern was sharpness of the HUD but if it’s not impacted too much by dropping the res, I’m good with that.

EDIT - just tried it, albeit stationary not riding. Yeah, that does look good! Significant fps bump too. Zwiftalizer 2.0

(I have the Nvidia driver capped at 60fps, hence that’s where it maxed)

It’ll be the same, it’s not affected by the game resolution setting.

Cap it at 61fps, Vsync will hold it at 60fps anyway. And enable triple buffering, but keep everything else default.

I was partly wrong btw, the rider name tags are affected by the resolution setting. Rest of the HUD isn’t though:

I don’t recall ever seeing a definitive statement by Zwift that the HUD renders as a vector graphic at higher resolution than the game graphics… yet it’s very clear it does on the ATV4k, and now (per the test ride I just did) on PC at 1440P. (you made a comment on that in another thread!)

Links in the “Monthly Resource Megathreads” are 99% community-sourced versus 1% Zwift Official. Zwift built a really great “sandbox to play in” and kind of left it up to the community to figure it out.

On that note: would you be open to posting ZPCMR resources somewhere I can link directly from the Megathread? A lot of people (raises hand) aren’t on Facebook so they don’t have access. (or maybe they already are and I’m missing something?)