Ride Ons after ending a ride

I know there have been other discussions about this but I still don’t have a clear answer… after the ride on the Ride Report, there are people’s names who gave me a Ride On. There is a Ride On symbol alongside their name.
Will they receive a Ride On if I click on this Ride On next to their name in the Ride Report? 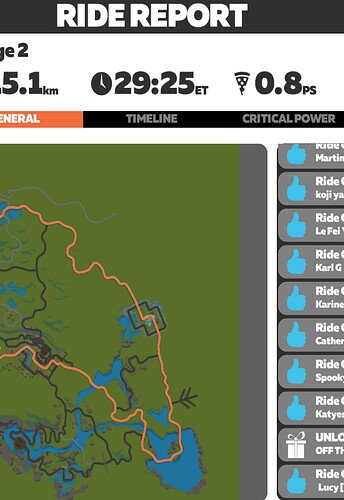 On the ride report screen? There’s no indication that it does anything.

I am pretty sure but as you know I have been wrong once. LoL

I don’t think they get a ride on as most of them probably were not Zwifting, just giving ride ons from ZC, so they can’t get a ride on.

Agreed, no indication at all that it does anything. Not sure then why the Ride ON thumbs up symbol is alongside the names if it doesn’t allow a Ride On. The names at the top of the Ride Report that show who you Rode With don’t have a Ride On symbol there. Why not there and why show symbol below? Anyway, I click the Ride Ons at the end of the ride in the belief that it is giving a Ride On. lol

I don’t think the ride report screen does anything to indicate it gives a ride on.

I thought I would test it tonight.
Did Pace Partner Ride - got given 25 Ride Ons gave none out.
Finished Ride went to Ride Report and clicked on the thumbs up of everyone who had given me a ride on.
Closed session down, came inside from shed and opened up CA.
Went to my Activity Report, clicked on my 25 ride ons thumb to bring up full list.
Checked the Activity of those who had given me a ride on to see if they had now received one from me.
They had not received one from me.

I thought I would test it tonight.

Thanks for testing this, I wanted to do the same but never got to it.

I was convinced that it gave the rider a rideon because I sometimes ride with my wife and forget to give her a rideon during the ride (yes I should know better) and then do it on the ride report and she would tease me that I waited to long and now it does not count.

No I have to remember not give her one during her ride to test. LOL

Possibly takes longer to action by Zwift than I gave it tonight. I will check tomorrow for those riders I know I did not manually give a Ride on tonight. I only did top 5 or 6 riders from the report so have plenty of others to check tomorrow.

What’s the verdict Ian? What did your latest testing show?
The Ride On Thumbs on my Ride Report always show up blue, except if I receive one from someone who is Following Me.

I always get a bunch of ride ons after a ride. I would be exceptionally surprised if people were actually actively looking for me to do so.

I know it’s not an actual answer, but I would be more inclined to think it’s people returning ride ons - I give out loads on group/pace partner rides.

I found no evidence that by clicking on the blue thumb on the Ride Report that it actually gave anyone a Ride On.

The list must be there so that you can click on their name, click on their activity and then click on their white thumb on a blue background to add your Ride On to their number. Or simply - two extra stages which could be avoided if you could in fact give a Ride On from the Ride Report screen