Does anyone know a way to limit frame rate on Windows PC?
PC is fairly powerful and can run Zwift at 140ish FPS on ultra, and to save energy I want to set an upper limit.
Zwift customer support didn’t know and suggested asking here.
Thank you and Merry Xmas.

These will be within your graphic card settings.

I’m not sure changing it will make any savings though.

And you’ll not get 140 FPS consistently and certainly not in Neyokyo. 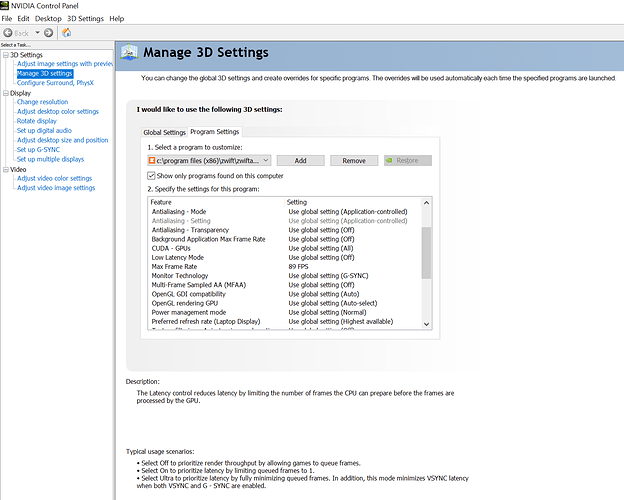 I’ll leave this post up just in case anyone else needs to know.

There’s some other settings you might want to change also.

Join the Facebook group of which @Dave_ZPCMR is the resident expert of & you’ll get access to these.

Getting between 130 and 165 depending on where I’m at. 165 is Screen limit.
RTX 3070, Ryzen CPU and plenty ram etc.
Your suggestion is correct, the rate limit can be done on GPU settings.
Thank you

This indeed a concern if Support cannot help with such a technical issue.

To be fair it’s got nothing to do with Zwift. Did you contact Nvidia customer support?

James, I totally disagree. Zwift should have knowledge of the hardware their platform runs on.
Although, their suggestion of asking here solved the query I had, so no big deal and I’m happy,

I’m glad your issue is fixed.
People run Zwift on tens of thousands of different set ups and net works and devices etc.

Expecting Zwift to know the technical aspects of an individual set up is a large and possibly unreasonable expectation.

Zwift could do many things differently (perhaps better), but many people get mad at Zwift when it’s not Zwift’s fault.

Limiting frame rate isn’t deeply technical or specific to a particular user when it’s within the driver settings of virtually every system out there with an Nvidia graphics card. I think they should have some knowledge of the hardware they name on their own ‘supported devices to run Zwift’ page. I also think we should hold them to higher standards.

Tim, no one is getting mad here. I already said I’m happy.
To argue against your point, there are only a handful of GPU manufactures, and gaming platforms should have knowledge of them all.
(FYI, I am very happy with Zwift)

I disagree. You can’t expect a support desk to also offer support for hardware, when you consider what that spans. How do I limit the framerate on my graphics card is a purely Nvidia/Windows question, controlled completely outside of the game. Imagine in Zwift had to field BSOD questions, because that’s the hardware the game runs on.

Now when support doesn’t know simple things about how Zwift itself operates (which is common) that’s a fair callout.

I think this post has run it’s course.
Differing opinions is ok and we’ve expressed them… end of the day… we all know how to limit the frame rate for Zwift, so job done.

Take it easy and ride on for Xmas!

Their supported devices page names an Nvidia GTX 970 as optimal, which requires a driver. Fair enough, frame rate capping is borderline ‘not really Zwift’ but I just don’t think it’s unreasonable to expect that the technical support function for a [high cost] video game should have someone with technical knowledge of aspects strictly related to running Zwift as a video game - which would include stuff like drivers and what the settings do. Why is it that I could knock up a page explaining a few things like this (though maybe nobody would read it

) , but Zwift themselves cannot? I don’t have any expert knowledge.

There are tons of reasons why a BSOD could occur but it’s an error that isn’t meant to happen, this is a deliberate setting. So I’m not convinced that’s a great analogy, though I expect they do get loads of questions of that nature anyway. Comes with the territory IMO.

Anyway the OP is sorted and happy. I just like a whinge as you well know.