I purchased a kickr core yesterday to work towards a big year of cycling.

However when riding or attempting to ride in the heaviest few gears resistance seem incredibly high, leaving me to output a high amount of force to keep it going round leaving me with a having a lot of tension on my quads.

If I was going uphill I would understand however this happens when free riding not connected to Zwift and on flat routes on Zwift.

All height weight etc is correct and the spin down has been done multiple times however no luck.

Funnily enough if I unplug my kickr it seems to work fine?

Had anybody any idea as to why this would be?

I’m really not sure I know anything about your problem and I’m sure others with knowledge will see your post and reply shortly.

I looked up previous similar issues on this forum. You might wish to read through the link below and see if any of it helps point you in the right direction.

I also notice that you haven’t used Zwift for over a year. It may make no difference but have you updated Zwift to the latest version?

Hope someone else can help you out.

Since upgrading the firmware of my Wahoo Kickr Core to 1.1.1, it doesn’t work right with Zwift (Macbook pro)anymore. Spinning out on steep hills, high resistance on flats etc…downgrading firmware solved the problem.

Thank you for the reply.

I also checked previous issues which some are similar but never seem to be resolved.

I have only just purchased the smart trainer a matter of days ago, my previous Zwift attempts were in a gym with smart bike hence the lack of rides.

My trainer firmware is up to date and I have downloaded the latest version of Zwift.

I am of the opinion it may of been a set up issue although a local bike shop fitted a new 9 speed cassette to the trainer today.

It feels as though something is vibrating/causing friction when in highest gears making the resistance very heavy before I even connect to Zwift, even when connected to Zwift on a flat route the heaviest gear feels as though I am climbing up a slight hill.

Middle gears are fine however the last 3 require a lot of work to consistently keep peddling.

Just been back to my local bike shop to make sure everything with the cassette and fitting was right which was all fine.

Member of staff said the heavy resistance feel will be something to do with the trainer setup, as a result I am going to jump on and redo the spin down again to see if there is any difference.

Use the Wahoo app for the spindown…do not use Zwift calibration.

I used the wahoo app for the spindown and set up.

I have just been to another bike shop with my bike and kickr, adjusted derailer alignment slightly and tested whilst there.

Also managed to test another kickr they had set up in the store of which feeling was similar although the core still seemed to have more resistance at higher gears.

Will speak with wahoo support although having tried another also it may be a case of me coming to terms with the trainer feel?

Other than 1 free ride I hadn’t changed anything on there. Jumping on now to do my ftp and free ride I’ll report back later.

Thank you for the feedback

That only changes the resistance up and downhills and they said the issue is on flat routes.

So completed the long FTP test earlier, FTP came out as 188 watts which I think is incorrect, I have previously completed (although on a watt bike) a ramp test before and had an FTP of 284 watts, this was a few years ago and before I started road cycling.

During the blocks before the 20 minute FTP test today, one of the 5 minute 205w (although I am sure it said 305w) blocks I had to completely stop peddling due to the resistance going so high.

It was impossible to move the peddles until erg mode switched off, but I then couldn’t get back to anywhere near the number for it to restart, I had to wait for it to come down to the next lower block.

The 20 minute effort was tough due to the feeling of my quads having to work what felt like a lot more than they should, although fitness levels were ok, only 1 minute spent in the red zone out of the 20.

After some reading I’ve come across that 188 ftp is as I initially thought, low / beginner stage of which I would say I am far from a beginner

Feeling to try the ramp test tomorrow to see if the results are much different however based on todays ride feel I am unsure if it will based on the constant drag / resistance feel when riding.

Trainer difficulty is set to 50% also.

Any help is appreciated.

Well done, 188w is a good start and will improve as you get used to indoor riding on your Kickr Core. For information a bike speed calculator would suggest your 28.3 km/h average would have been around 130-135w.

Is there any reason why your cadence isn’t showing on your ride report.

Yes you were hitting 305w not 205w during the early part of your 5min all out section. Your FTP test only called for 205w but you were pushing a lot more. 305w for 5 mins is quite high (IMO) and I think you might have hit what is called The Spiral of Death on an indoor trainer in ERG mode. 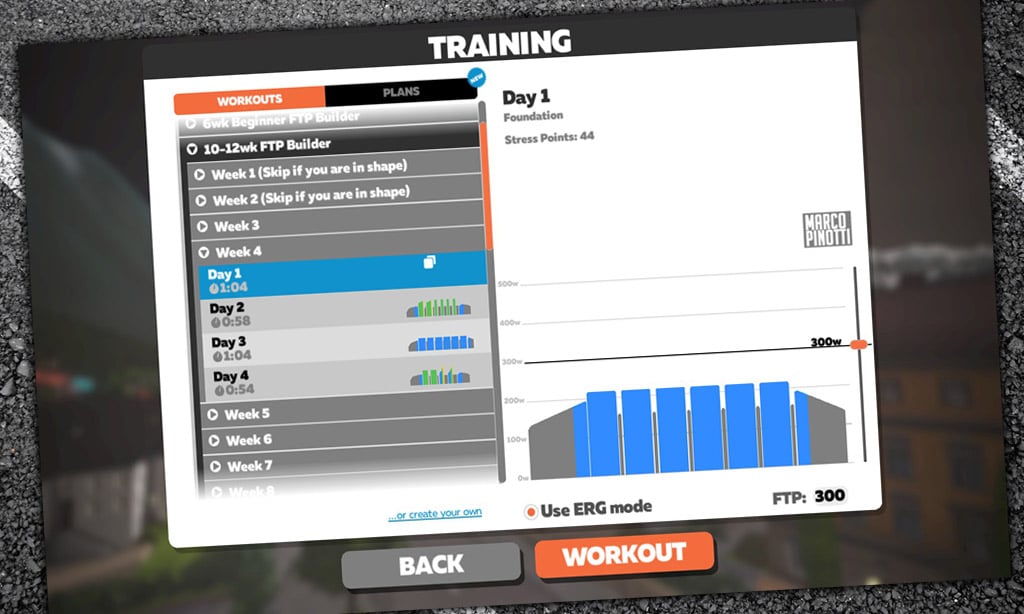 All About Erg Mode in Zwift

How it works, and when to use it.

Are you using a Companion App or Zwift.com login to view your ride activity reports?

Your Activity History and .fit Files

Best of luck with your Ramp Test.

Upon further reading after my last post, I have found the reason for the low ftp based on my perceived ability.

My understanding prior to this finding was ERG mode controls the entire workout for you and I didn’t need to touch the gears, which is the case, However what I wasn’t aware of was that during an FTP test it is deactivated (must of missed the prompt on screen).

The above will explain why despite giving a the effort the watt’s didn’t seem to shift to higher outputs and my heart rate affected too much, as after checking this morning, I had another 5 gears remaining which would of seen the wattage increase.

I think that one way to test the resistance is to create a simple ERG mode workout to keep say 100-120 watts and then try to shift from the slow to fast gear and see how it feels and if the trainer can manage the steady watts OK.

I have Kickr Core as well and indeed the resistance feels higher when I am free riding in faster gear on flat road (no ERG mode). But also, you go faster. Just like in real life.

You may also try to do the spindown via Wahoo app after you finish 10-20 minutes of riding and see if it makes any difference.

I’d suggest doing the ERG controlled (besides the initial 5min freeride at start) ramp test at this point, to get a rough ballpark FTP. Zwift workouts: FTP Tests » Ramp Test | What's on Zwift?

I believe the outcome of my FTP was because I assumed Zwift would control my output effort throughout the entire test, but during I was supposed to shift up and down gears to suit based on how I felt, this isn’t something I did as I did the entire 20 minute effort in the same gear, which led me to be confused as to why despite spinning as fast as I could it wouldn’t go much above 250w on the selected gear (as I still had another 5 gears to use)

Yep, that’s why I suggested doing a ramp test if you want an FTP estimate ASAP, it will be far less fatigue inducing in itself and any fatigue from your manual 20min test the other day won’t skew results so much.

From my experiences, it’s the final ~5mins of a ramp test that hurts, a slightly negative split manual test will hurt for 10-15mins if you have a good idea of what you can do.

ah perfect, so the ramp test will be controlled by erg the entire way through to failure I am assuming just so I get it right this time?

Will be popping on the bike in an hour or so to give it a go.

Just completed the ramp test, managed up to around 15 seconds at 360w which has set my FTP at 255.

Ramp test definitely helped with ERG mode controlling the resistance, makes a bit more sense now as to where I went wrong yesterday.

Thank you all for the help.

Here’s to a good year of cycling