Looking around in the Zwift directory, I can’t find any config files setting the keybinds like in most PC games. Which leads me to believe they are hardcoded. Is that so?

Boring explanation, don’t read it:
Reason I’m asking is I’d need to swap the powerup button now that I can’t run Zwift and the Companion app on the same network right now. Let’s not get into why, it’s complicated. This means I can’t really use the Companion as a remote. I have a peripheral that could trigger the powerups but it’s not configurable. (And no, before you ask, I’m not willing to spend $100 on some fancy programmable gaming peripheral just for powerups, let alone $300 on an overpriced keyboard stand and I’m not going to build one either.)

I have a peripheral that could trigger the powerups but it’s not configurable.

No you got me very nosey what peripheral did you get.

Autohotkey may be able to fix this for you, depending on the keyit is sending you can remap it to “spacebar”

I would also like to configure the KB bindings myself. First think I would remap A to Alt+A. LOL

You are right that the key bindings are hard coded. What you can do is use AutoHotkey to intercept and remap the key presses.

@Mike_Rowe1 Actually, that’s doable. But it’s not exactly a $10 solution like mine. And I fear I would make myself a victim of domestic terrorism. (Kid sneaks in: ‘“Powerup!” giggle giggle’)

@Gerrie_Delport_ODZ it’s a 1 button rgb usb keyboard. A sort of half-size osu! thing that was really cheap and pretty looking too. I can get it within reach from the bike by connecting it to the USB port on the big keyboard. It was supposed to be configurable, but these things come straight outta Shenzhen, and if the manufacturer web page works at all (it doesn’t in this case), then you’d still not want to download their drivers and controller software from an obscure uncertified/unsafe Chinese site. (I did once, when the Varmilo keyboards were new to the market - turned out alright and now they’re established and all the rage, but it was a bit scary.) Anyway, since it’s a half-osu! it binds to ‘A’ and not to space bar. 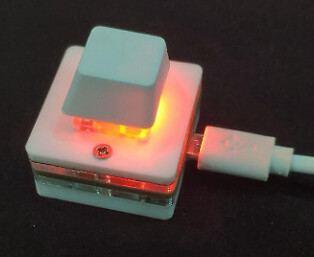 It would be cooler with a big emergency breaker like this to slam though.

The reason why I can’t use Companion app and Zwift on the same network right now, or rather why I can’t be arsed, is that the flat I moved to has ethernet all over with ports in every room. And I don’t need a switch or router for them, hence not for the desktop computer either. But of course I need a router to get wifi, only then the mobile is on a subnet and can’t talk to the Zwift app. The obvious solution is to route everything/every room through the router (the current one has only 4 ports), but… later maybe… not right now. So an osu! keyboard it is for now.

I was thinking of buying one of those BT presentation remotes, you know, for powerpoint. They are cheaper than small game controllers but still far more expensive than my cute little 1-button, plus I need a BT dongle for the desktop gamer PC (I have one… just can’t find it) which basically doubles the price.

@Jesper_ZwiftHacks Yeah, I need to use something like that. I was looking at options but want to avoid bloatware. I see AutoHotkey is open source though. That’s great, I’ll use that. Thanks.

Anyway, it’s a shame that Zwift Kommander seems to be more or less discontinued. There’s a need and a market, albeit a very small one (too small, obviously) for a BT controller like that. Oh, and I wish they key config in Zwift wasn’t hardcoded. I wouldn’t even want to write a ticket about it at this point though. There are way more important things they could spend their time on.

And my cheap @$$ version

If we just could get a RO bomb shortcut on Windows

it binds to ‘A’ and not to space bar.

I am in the process (when i have time) to build something similar using a Raspberry Pi Pico there are many Keyboard tutorials out there.

I did a prototype using a Arduino micro but the Pi is a bit smaller and cheaper.

It would be cooler with a big emergency breaker like this to slam though.

I’d imagine you could get something like that using equipment intended for disabled users.

For example https://www.microsoft.com/en-gb/d/microsoft-adaptive-dual-button/ (which requires the adaptive hub too), can be set to a single button press or a macro/sequence of key presses.

Or a foot switch such as https://www.amazon.co.uk/Upgraded-iKKEGOL-Optical-Computer-Keyboard/dp/B08MC6JMYV/