September’s game release 1.29 is ready for all OS platforms and it’s got some juicy updates this time around.

On to how it works: The handcycle weighs a lot more than a bicycle, but makes up for its weight by being very aerodynamic. Additionally, road bikes will not be able to draft handcycles, but handcyclists can draft other handcycles, and get a partial draft from bicycles. Just like TT bikes, racing events can be configured to disallow this new bike type if the race organizer feels like a mix isn’t appropriate.

Over time we plan to add an additional handcycle or two to the drop shop to allow for more variety and higher performance models. We have a handcycle thread here for feedback and discussion. 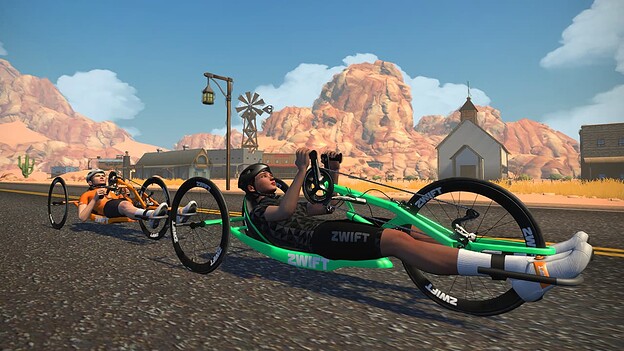 Any questions about this release? Please ask in this thread.

Any questions about this release?

What’s changed with the font?

Nah that was the other week, they’ve changed them again with this release but they look the same to me anyway.

New bleep/bloop sound effects on things coming and going off screen, like ride-ons.

Great update this time it seems

Nah that was the other week, they’ve changed them again with this release

As far as I know, we have not changed the new font since they were introduced in v1.28.1. Getting confirmation of that.

UDPATE: confirming that there were no explicit changes to fonts in 1.29.0 vs 1.28.1. @Dave_ZPCMR If you noticed “tweaks” that can happen with minor localization updates.

Does this update include the missing ZA workouts on iPad and ATV?

Bit disappointing to me - though the September Update would bring something bigger, given all the hype around reduces OS’s I’ve hoped for new courses or even and expansion of maps.

Does this update include the missing ZA workouts on iPad and ATV?

The work wasn’t completed in time to release today. We expect it to be fixed in the next 1.29.1 patch

…and if you did the old fonts hack, this is what you get unless you do it once again. (Not worth the trouble if you ask me.)

Any ETA on the release of that one? The second workout is in there (so my this week is fine), but I will likely be doing the 3rd before the 3rd group workout is on the calendar, so that’s when I’ll be stuck from a timing perspective.

Edit: Also I would expect a lot of folks to be doing the 3rd workout early next week (ahead of the 3rd group workouts being on the calendar) if they did the group ride and the first two workouts this week. The only other long ZA workout on the list I could do once I finish the second workout would be the 5th which is probably not ideal.

Anvil powerup has updated behavior. It will now only have an effect when going downhill.

Oh, why? It was so funny when someone dropped the anvil uphill and instantly was spat out the back

The old anvil was more of an IQ test than a powerup, especially on courses with no descent long enough to last through the entire duration…