At the risk of going off topic slightly, how much better are 4th gen internal graphics? How much longer do you think they’ll be supported. I have an old 4th gen i5 (not sure which) pc I sometimes use.

4th gen was a substantial improvement on 3rd gen and earlier in terms of integrated graphics. In terms of Zwift it’s miles better, and able to do around 30fps at 1080p on Basic profile (essentially the same as an ATV4K, hence why I always mention it). No major steps up after that until Ryzen came along, which is obviously far more modern.

For TV OS, PLEASE tell the developers to STOP having the updates cause our login and power data to be reset/deleted.

I have been using Zwift on ATV since it came out have yet to see login credentials get reset on ATV.

I have been using Zwift on ATV since it came out have yet to see login credentials get reset on ATV.

I hadn’t had that either until this latest update, where I had to go through the pain (a strong password combined with no keyboard) to login again.

Interesting. I’ll break out my ATV again to see if it happens on mine, too. (Two previous Zwift updates didn’t require manual entry of the login credentials.)

By the way, if you have an iPhone, it’s possible to activate the ATV remote widget in the ‘Control Center’ and, if any character-entry is required, the phone keyboard deploys, which speeds things up immensely.

After this update the order of the weeks of the “Build Me Up” training plan changed or got mixed up.

This is a known issue with “shortened” plans for the update (for instance the 10 week BMU plan).

In the meantime you can select individual BMU workouts in the workouts section.

Any Zwift progress on improving the Apple TV remote control?

Any progress on the Zwift improvement for the Apple TV remote? Waiting patiently for 2 years and counting.

I’ve been using Zwift on AppleTV since it was possible (2017?) While generally okay, I still on the odd occasion have issues selecting something

And if you haven’t done so already, get one of those silicone cases for the remote. It’s a game changer! Remote is easier to hold, use, find, etc…

CPU weirdness continues. Been testing two PCs on the same platform, with the same RAM generation/capacity/speed/config, same dedicated GPU/driver version/settings, same Win10 install and exact same process used to set them both up. The only difference is the CPU; one is showing the unexpectedly low frame rate issues I’ve mentioned and the other is not (it’s performing as before/as expected). Historically there would be no discernable performance difference in Zwift whatsoever between these two CPUs despite one being much more capable in other applications. I’ve also swapped the CPUs around to verify it’s not anything else affecting the frame rates, like BIOS or microcode version.

*tested with it both enabled and disabled in BIOS, no change

At this point all I can think of is the i3 is getting hammered by something and the Xeon is unaffected by it, or can cope with it. Is the new UI trying to use integrated graphics? Could it be related to previous generation iGPU support being dropped? If say the game suddenly requires four physical cores from now on, or more cache, then it doesn’t make sense that people on far more modern/capable CPUs than either of these are seeing the same issue.

Probably just rambling away to myself here, and whether it’s of any help I’ve no idea. But hey, we’re asked to report unusual stuff and this definitely qualifies to me.

Some screenshots here showing the frame rate difference in the same spot. Xeon holding 60fps (vsync) with ease as normal, i3 struggling big style. Never the case before.

Just did TOW 2 today. Started but had to quit with trainer issue. Rejoined a few minutes later. Rider list only showed me all ride so really hard to try and ride with others also in the ride and stay together 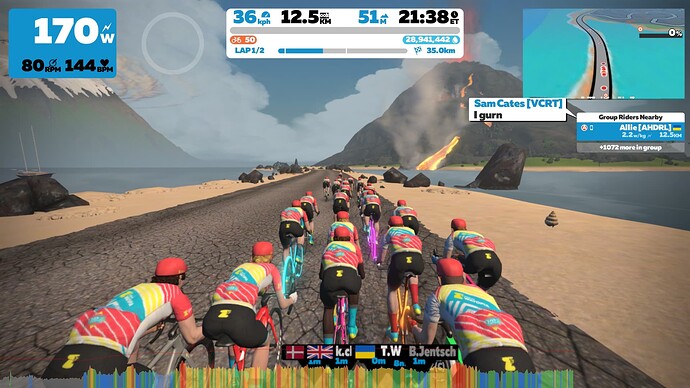 Deleted - It’s not a Zwift thing.

This has only happened to me once before.

I hadn’t realised that the battery charge on my Siri remote had drained so low that it stopped working completely when I was on the Zwift menu screen and everything froze. Not knowing how to shut down and re-start Zwift (and not knowing the remote was the problem), I briefly switched my Apple TV box off and back on at the mains.

That fixed things at the time but when I next came to ride I had to input my login credentials and then discovered that the “your best” 5", 1’, 5’ and 20’ power numbers on the Zwift “Pause” screen had all been reset to zero. I questioned this with Zwift and they told me that these parameters are stored locally and not on some Zwift server so they couldn’t be returned to the original values.

Moral of the story; never switch off your Apple TV box at the mains! I’m also guessing that doing a reset (not a restart) via the ATV software might cause similar issues?

A number of riders had problems with In-event Zwift App crashes in the last few days, a timing that appears to correspond with the Mar 9th update.

If you’ve also seen this, you can “vote for” and add details to the growing forum thread located here: Zwift App Crash shortly after Event starts [March 2022] [1.23.0]

Whether this problem is caused by the recent update or a separate problem, it’s an important one to fix quickly.

4 posts were merged into an existing topic: Zwift Companion activity not syncing to Apple Health

Thanks for the response @Wes
Please keep in mind that this is a highly requested feature, hopefully this will be supported in one of the upcoming versions.

Nots sure that is a ToW thing. The rider list has been bad for months.