I used the Runn this morning - no issues.
Make sure it is not connected to your phone still. Force quit the app, and unplug/plug in the Runn.

not sure if connected by
but prior to TdZ Richmond to day, Zwift lost all connection to Zwift (BT hrm, power pedals, trainer) , 19 min in, Wifi looked ok throughout, would not reconnect without exiting zwift. Apple TV, ( game continued, just no power etc) iphone 8 .

Had just done sprint, Zwift leaderboards still not showing how many minutes, days, weeks since entry on apple tv.

updated apple tv and companion app prior to todays event.

After the update I also got glitches, avatar blincks white, never had that before.
Win10 all up to date also Nvidia gtx1660 up to date, 32gb ram, been Zwifting around 4-5 years.
I dont want to install OBS as solution because it work perfectly fine before

OBS is a reliable, lightweight workaround to the problem. If you’re unwilling to install it (that’s your choice) then you will see the issue until Zwift fix it. They know all about it.

An alternative is to cap your frame rate at something lower than you currently use.

We (the club that I am a member of) are experiencing a much higher number of drop-outs during races after this update, especially with Apple TV. The paired bluetooth devices are disconnecting and are struggling to re-connect. Previously rock-solid platforms are now quite flakey.

I agree - this latest update is causing significant issues with bluetooth connections.

@Wes is there any news on this feature that was originally announced in November?

Activity files will now be temporarily saved locally if a Zwifter encounters poor network connectivity or disconnection. These files will be used to attempt to automatically resume the activity on the next login.

This item has been removed from the notes. That feature is a work in progress and was removed from 1.19 as we continue to improve it.

@Wes @shooj After the recent update I now have issues with the speed & HRM sensors not connecting at all, I have rebooted devices, changed batteries etc etc and nothing works . . is there any updates as to when this will be fixed.

Not my race, but just leaving this here: 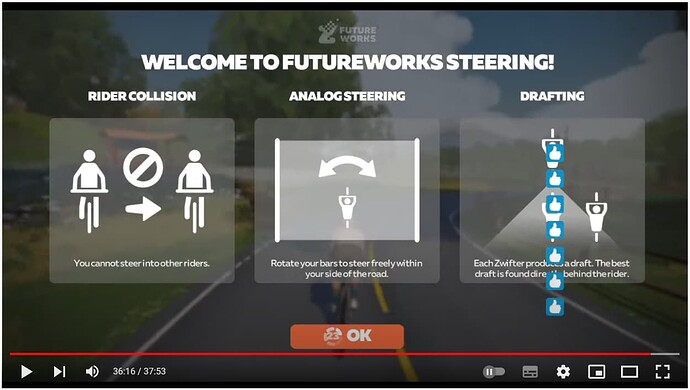 Haven’t seen that one in ages, Dave.

Unless I’m mistaken, steering users can now tick a box so they don’t have to see that every time. (Either that, or it just doesn’t appear at all on my system anymore for some reason.)

This is on immediate completion of the race, hence the thumbs up buttons showing through - all other riders having got a sprint PB.

Am guessing it was a non-steering race, and the user had the steering device on before the race. As soon as Zwift recognises a steering device after such a race or group ride, it goes (or went) through this routine.

Names missing from some Korean riders, I assume a font problem. TdZ stage 7, this morning. Windows 10, all up to date. 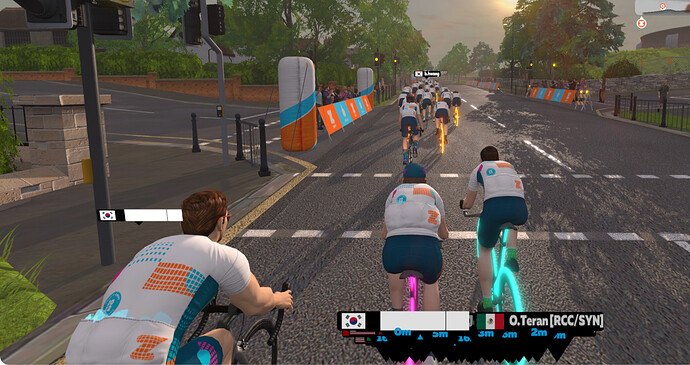 Their names showed up fine in the leaderboard to the right.

I have this issue also. Using Mac Pro.

Hi there, you’re in an old thread here but you can change the scaling in the settings menu and make everything a bit bigger.

Thanks. Everything else is unchanged. Only the settings screen has shrunk