Since the last update I have noticed roads flashing colors on about 1km of roads at Neokyo. It happens as you approach the blue arch after the arcade. Sometimes is quite frequent and other times just a few flashes. I am using appleTV with latest updates. I heard another rider mention it on a group ride last week. It happens so fast that I cannot get a screen shot.

I saw something along those lines in Neokyo myself recently, although I can’t remember where it was exactly (but my route did include the arcade). As you say, very hard to get a screenshot.

I’m on AppleTV too.

Thank you for reporting this, and I’m sorry that you’re experiencing this.

When the road flashes, does the road disappear and you can see underneath the road then the road reappears, or is the road still there and something is flashing where the road is suppose to be?

I don’t believe you can see through the roads. The roads flash bright red, green, blue, orange… I have seen it on four different rides. Last Thursday it was quite brilliant and the game on the appletv locked. The screen froze and the remote seemed to not control the appletv. I was still in game and could follow the ride on the map page of the companion app. After 5km I saved off of the CA and rebooted the appletv and it worked fine. I still had the flashing roads though it did not lock the appletv again. Next time I can go to Makuri I will try to video with my phone and attach.

Thank you for that detailed description @the_guaiwu, and I appreciate your offer to record the video as that would be helpful.

If you are able to record a video of the roads flashing bright colors, please reach out to our support team with the video attachment mentioning your forum post so we can troubleshoot this further.

If you haven’t already done so, I’d recommend reinstalling Zwift to see if it resolves the issue. To do that, just follow these steps:

Hey Sam, here are 5 pics I took at the start of the SCZL ride yesterday, 9/1/2022 @ 3:10pm PT. This issue started after last big release, got somewhat better, then this happened yesterday. Note this also happened last week on a group ride on RGV, but I was able to continue/complete the ride as the effect only occurred in a few places and was short lived, but just as intense; need to look away or I will get a bad migraine. I can provide specific details about the macbook/OS I’d you’d like. Thanks for your efforts. It’s frustrating to have to bail on your fav groups/rides. 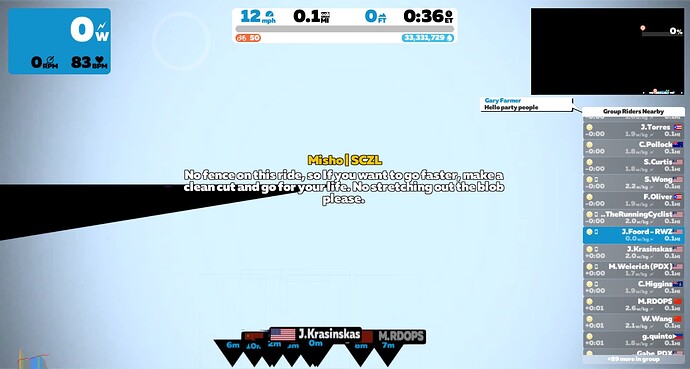 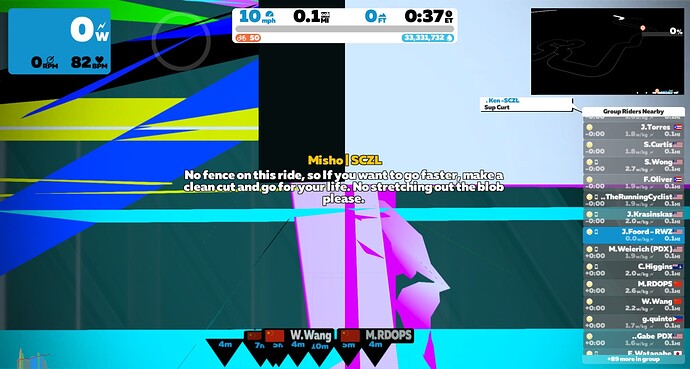 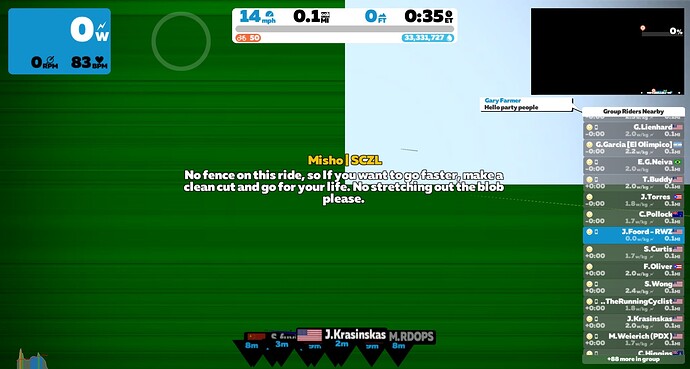 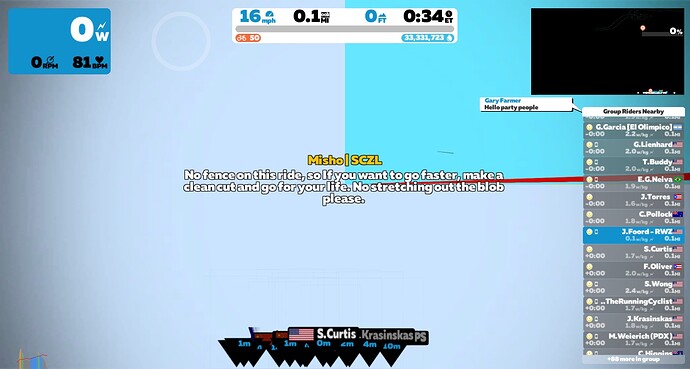 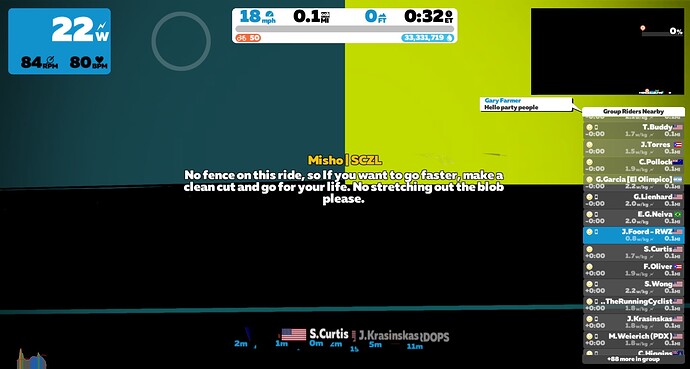 I sent a short video to the tech support team. I then deleted and reinstalled Zwift on the AppleTV per below instructions. This morning in Neokyo I still see some of the flashing roads fairly consistent in locations on the route. Not nearly as intense as what Jim posted below. Next I will try a different HDMI cable to eliminate that as a possible cause. Have a great Labor Day weekend.

Started with C grade and 200+ riders and it was unrideable…screen display flashing 95% of the time.

Switched to D grade with ~70riders and much better…intermittent flashing near the arcade each lap but otherwise ok.

Btw this flashing in Neokyo has been occurring for weeks, but todays was the worst ive seen by far. 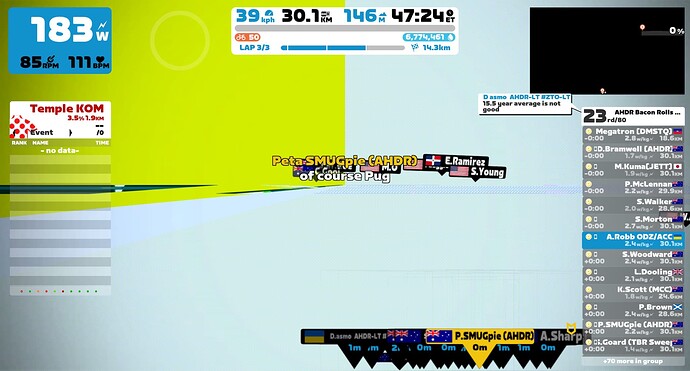 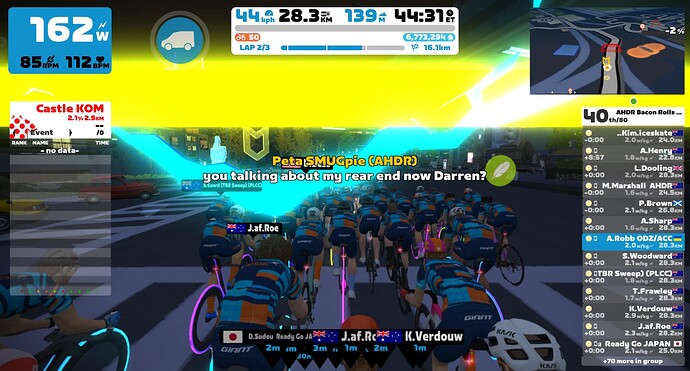 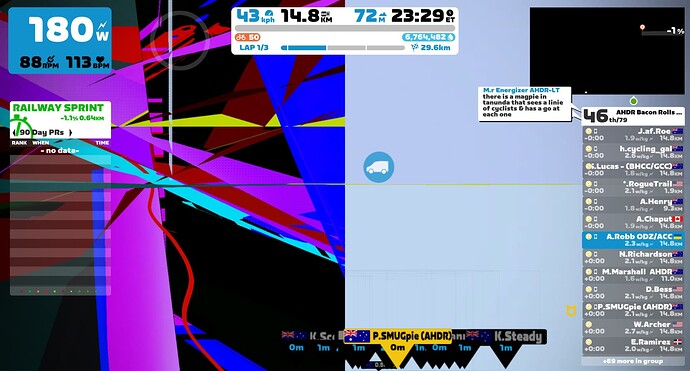 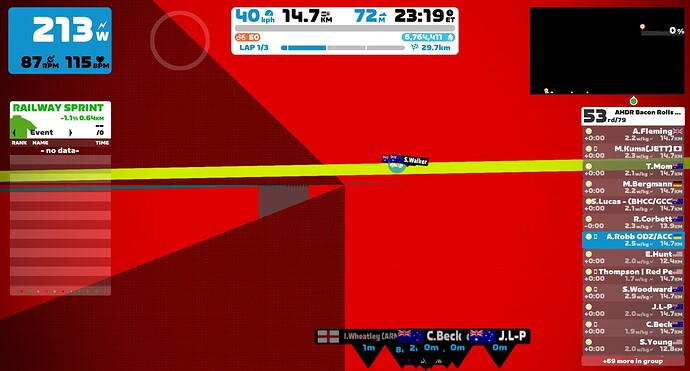 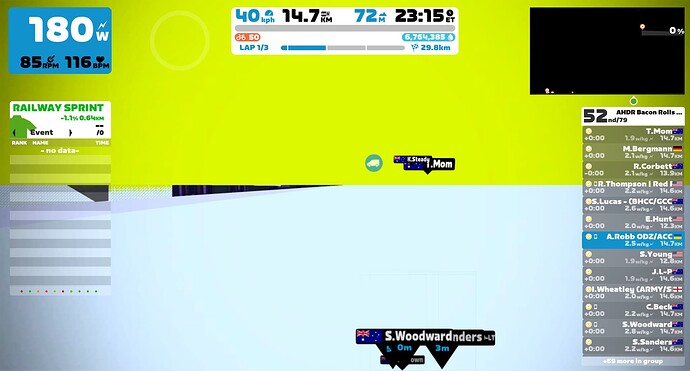 No Solution after 25 days?

This bug has existed for months for me, and has crashed me twice. It got me again today, and here is a video of what it does, can be seen at start of race and then later into a full blown spasm of shards that crashes the ATV - Kiss Race - And Zwift Graphics Crash again on Neokyo - YouTube

In the races it can be extremely distracting to say the least!

And here is another race, The Chop, where it was going nuts but it never crashed: The Chop by AHDR on Sleepless City - Zwift Racing - 🥇 - YouTube

Same obnoxious problem. Apple TV freezing in the heaviest load area of Neoyko while on a large group ride. At least give me an option to turn off some settings or something, zwift! This ruins my group rides.

Happening today for me on Neokyo. New Mac Mini on 12.6. I did a fresh reformat and reinstall of Monterey, and then a new Zwift install, and still happened. Even froze completely 4 miles into a group ride. I have a video of it if helpful. 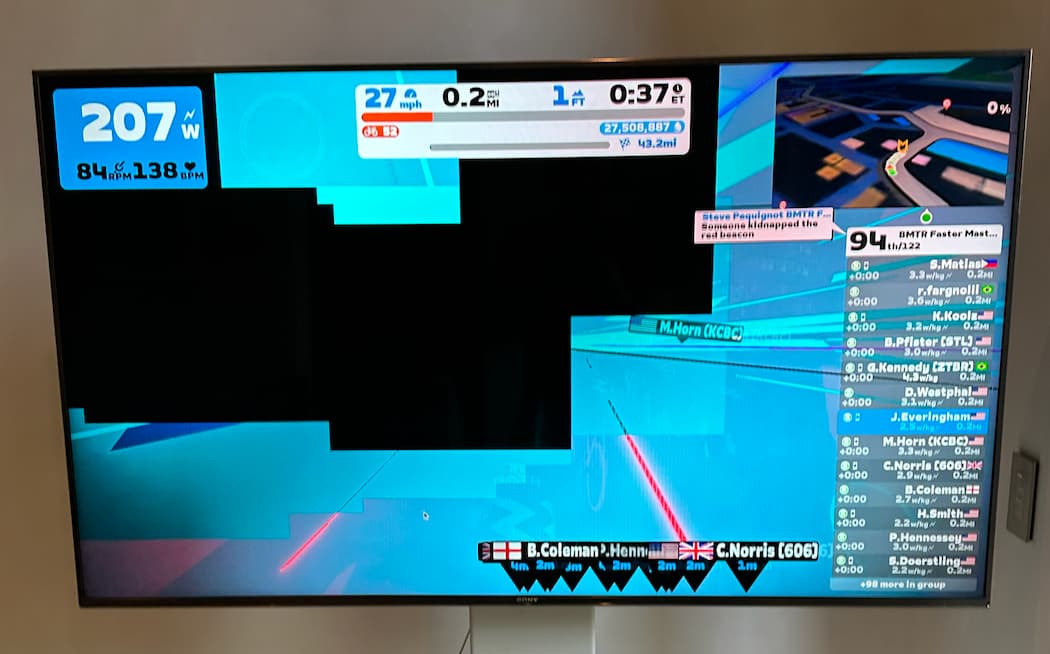 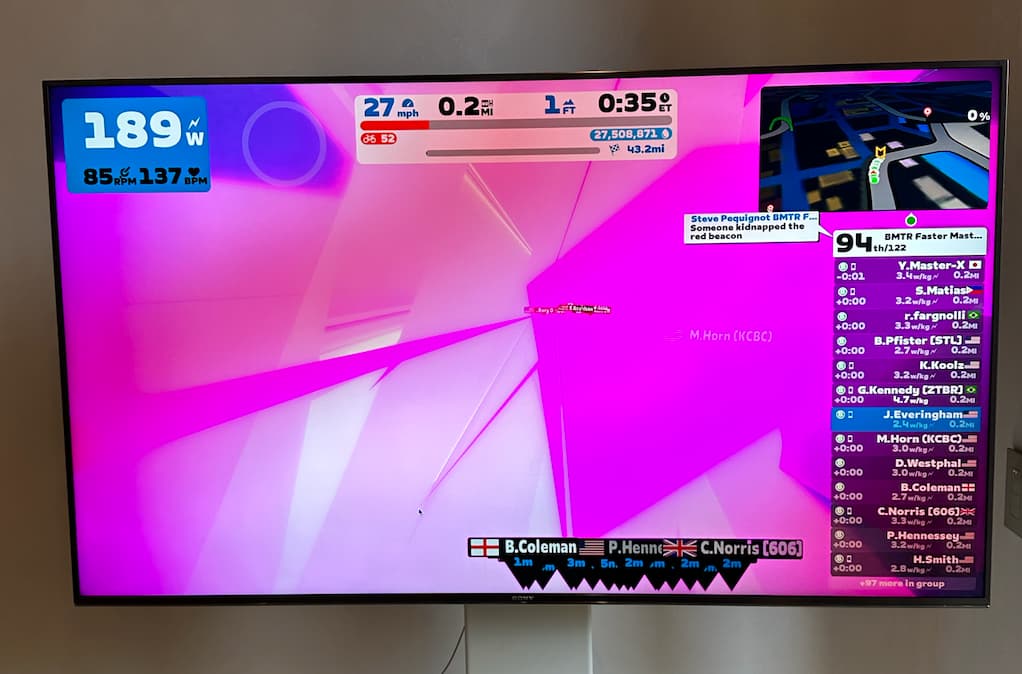 I’m having the same issue, resulting in Neokyo roads to be completely unusable.
This is a P1 issue, since e.g. races or group rides that happen in Neokyo are basically inaccessible for (at least some) mac users.

I hope that there will be a fix very soon!
If you need either video and/or logs I can provide them.

For the reference I’m linking same issue that I found on Zwift forums:
https://forums.zwift.com/t/coloured-blocks-on-screen/591146

I experienced the same issues a couple of days ago on a group ride in Neokyo.

I have some screenshots, but they look like what others have shared, so I won’t bother adding them.

I assume that machine has an M1 CPU? Most of the people reporting this seem to be either on Apple TV or Intel Macs. I’ve never seen this on my 2021 M1 MBP, though I was expecting it when doing numerous Makuri rides in the last few days. However I run Zwift in windowed mode. I wonder if everyone seeing it is running full screen. I’ll have to give that a try.

I had the same issue on a bigger group ride in Neokyo. It seemed to be better when less other riders where around.

Recently updated to MacOS 13 (Ventura) and did not see any glitches. They claim to have a bigger Metal update.
But I was riding alone, not in a big group.

Same issue here, on AppleTV 4K. This is been happening on all Neokyo rides for at least 2 months. Ultimately the game freezes completely.

Same issue for me. Started
Happening about 6-8 weeks ago, also on Mac OS 12.6