Goodafternoon,
on Apple TV the screen keeps freezing at the exact same spot in NeoKyo on the Wandering Flats course.
During the whole NeoKyo city part the screen is very flashy, which at a certain point it freezes. Game works fine besides the screen freezing. Sounds is still working etc. 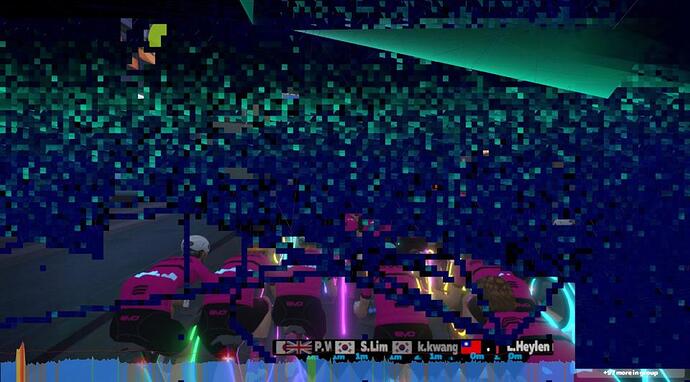 I have never had this issue on my Apple TV. Are you force-quittting the app after every use?

FWIW, I had an ATV issue recently and had to do a factory reset of it - probably a corrupt file or something. Worked perfectly after that. Zwift itself hasn’t crashed for me on ATV in years, maybe ever.

As much as I hate to suggest that - the equivalent of “have you tried turning it off and on again?” - a full reset is worth a shot. Your data’s in cloud and it only takes a few minutes. Make sure the TV-OS is updated.

I think is the same issue, I have also see the game lock once while screen flashes though I could follow ride on Companion App.

Hello Dennis, I have the same problem in Neokyo with Apple TV as well. I have a few race videos that show the glitch, and it doesn’t always lock up, but it did today and I caught it on video. This is for sure a bug, a few other guys have said they get the same glitch with the shards.

Video of glitch at start of race and glitch into crash at end of video: Kiss Race - And Zwift Graphics Crash again on Neokyo - YouTube

Same situation for me today also, even though it crashed I could still see map progress of group and chat with group via companion app.

Done a few rides on Makuri recently and not had any kind of issue (ATV user).

Did 2 hours today on Wandering Flats and everything was OK.

Done a few rides on Makuri recently and not had any kind of issue (ATV user).

Were you with a large group, or riding solo?

Wonder if the additional load of the other riders is pushing the ATV to the limit?

2 hr pace partner ride with Maria today; about 37 others when I joined.

No issues either time.

bUt ThE aPpLe tV iS bUlLeTpRoOf

Oh indeed mate! I mean common, Zwift is bullet proof on their development, it’s for sure not them to blame here…gonna put a call into Apple HQ now!

Wonder if the additional load of the other riders is pushing the ATV to the limit?

This happened in a large fielded race…puttering around solo or in a small pack does not cause the same issue.

I mean you could ride in other worlds and also why do you race in big races? zwift is working on important feartures like fire socks and lederhose kit… they cant be disturbed presently… and like others said it’s not like there are many Apple users out there… and who even streams those days? like I mean you are welcome

Same exact problem. Large group ride. Apple TV crashes in the most glowy part of Neoyko. Same spot every time. I can do the rest of the loop fine but it freezes right there and messes up my ride. Fix this, zwift!

Update on the issue, happening in Richmond today in Kiss Race again. Around 100 riders at start of event, and flashing was going nuts until the field thinned out some.