Today I rode a reasonably large group ride (130 riders) in Neokyo for the first time in a while. When riding at the back of the pack, Zwift was almost unwatchable due to huge full-screen coloured fragments that would render for a frame or two, causing horrible flickering.

I am using a late 2014 iMac 27 inch retina display, which has an AMD Radeon R9 M290X graphics processor with 2GB memory. Changing resolution didn’t help, and restarting the game/computer made no difference (I’ve seen this in other similar rides before). I’m using the latest game version at the time of writing.

The problem is clearly related to the number of riders visible at the same time - if you move towards the front of the group, the problem does not occur, and if you use the 1st person camera view, which shows fewer riders than the default, then again the problem diminishes. As I had a 2.5h ride to do, I experimented a bit, and found that if fewer than about 50 riders are visible, then the problem is unlikely to happen, while more than 60 makes it very likely.

I have not seen this issue in other worlds, although I’ve not done large group rides in all of them recently. I have a video taken from my phone showing the issue (it happens 11 times in the 4s footage) although I cannot upload it here. Instead here are a few stills from it. 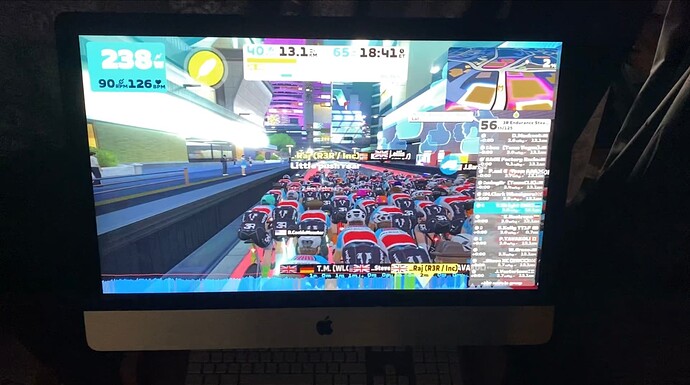 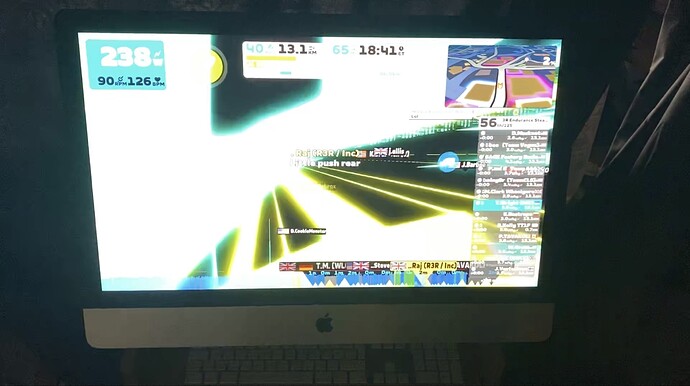 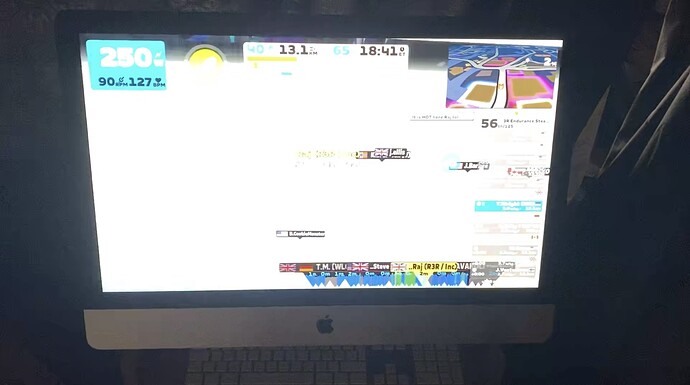 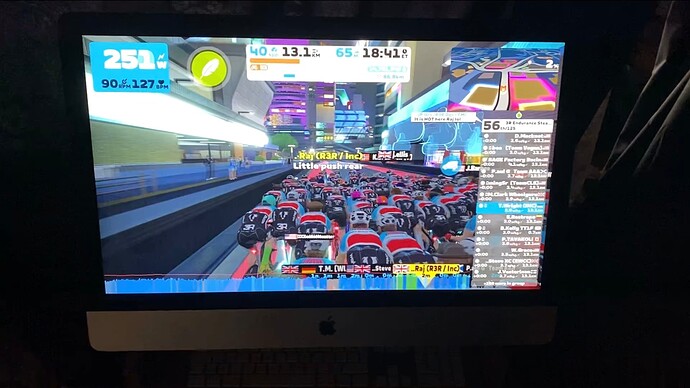 Screen Glitch on Zwift for Mac Bugs and Support

Is anyone else having this issue where using Zwift on a Mac the screen starts bugging out in events with larger fields like the images posted? I’ve not had this issue until fairly recently and now it seems to happen on the regular. Tried a fresh app install and no joy. Be great if anyone that’s had…

My screen seems to glitch like crazy on certain parts of courses. It’s always the same sections of a course. It started happening months ago and seems to have gotten worse. I recently decided to reformat my newer model mac mini, reinstall Monterey, and set it up fresh with the same results. I change…

Hi all, I’m on Apple TV while doing an event this morning on Wandering Flats and riding through Neokyo city the screen flashes with bright lights so much I can’t see the group of riders then the screen freezes and I have to reboot Zwift and late rejoin the ride is then fine until the same point and …

In the ZA / Group Workouts only the comes many Graphic artifact like this : [Bildschirmfoto 2022-10-01 um 20.17.21] Was not fixed after the last Update … Only in Group Workouts, Pace Partner and Free Rides a working well.

After doing another large group ride today, I can confirm that as per the other threads above, the issue is not limited to Neokyo - it also affects Crit City, specifically the final straight to the finish on Downtown Dolphin. At least it’s only part of the course there - Neokyo is horribly unusable in this situation.

Can anyone from Zwift confirm that this issue is at least recognised?

I did the Stage 1 Tour ride today on the Chasing the Sun route. All the bystanders in the city part of the course were either flashing green or yellow. Some weird flashing glitches too during the ride. I am using Apple TV 4K.

I believe this was the most recent update from Zwift

UPDATE: We’ve made headway on identifying the cause. I’ll update again as we make progress towards a fix.

The issue with the bystanders is described in this thread linked below. I don’t know if it’s related to the flickering screen issue - my guess is probably not but I don’t think Zwift have responded to the bug in which bystanders change to the color of a nearby pace partner or holo replay. On my M1 mac I always see the strangely colored bystanders but have never seen the other weird color flashes taking over the display, even in large groups in Neokyo where it seems to be common.

This started for me with 1.30.1. ATV appliance. I’ve seen other colors so not just green. It’s intermittent. [image] [image]