Zwift app on Macbook not connecting

Hi all. I simply can’t get the Zwift app running on my Apple laptop. I’ve followed all the troubleshooting steps and logged an incident with an Ambassador who couldn’t sort it either. The moment the app launches I get a network error ZML01 which seems to be network related (some users users in China said it was caused by the great firewall of china blocking access to google).

Tried a bunch of things like using Google DNS servers (8.8.8.8). tethering via 4G so not using my broadband connection etc.

Have any Mac users had any issues with the current Zwift app?

I used the new Zwift Hub with my iPhone today without any issue, just want to see it on a bigger screen.

Please provide the complete details of your Mac.

Its a Macbook Air, 2018. Was running Monterrey so I upgraded to Ventura. Firewall is disabled, no VPNs or proxies in use

I see China flags in game, some of which are locals and some of which expats. Can’t say for sure now, but apparently Zwift did/does work w/out use of VPN. Worst case, you use a VPN.

Yes, could try that. I’m not in China though, am in UK. Seems very strange.

Can I just confirm that there are other Mac users that are using Zwift without issue?

Support have contacted me so hope I can progress with them. They suggested quitting OneDrive but that didn’t make any difference.

Yes many people use macOS without seeing this problem. My first thought was some kind of network or firewall issue, but you already tried two different networks…

OK, good to know. I’ll see what the support team come back with.

Its actually my wife’s laptop so I can’t really tinker with it all day and make lots of changes. She’ll probably moan that I’ve disabled OneDrive from running automatically as she uses it for work.

I think I might just bite the bullet and buy an Apple TV 4K. Annoyingly, I had an older model until a year or so ago but sold it on Ebay as I hardly ever used it and wanted an NVIDIA Shield as they do more (play music from Spotify, some retro games, more Android apps etc.) but there is no Zwift app for that device.

It would be tidier too, no long HDMI cables from the laptop to TV. The controls on the Apple TV remote look cool too.

The controls on the Apple TV remote look cool too.

Many people find using the remote in Zwift extremely frustrating. The latest one is better than the older remotes though.

You might try booting the laptop in safe mode, to rule out interference from other software on it.

I think I might just bite the bullet and buy an Apple TV 4K.

A number of forum users hate Zwift on ATV. Ignore them.

I Zwift on ATV 95% of the time and it’s fantastic, provided you use the Companion App in game and reserve the remote for setup/shutdown. This point is underscored by sports tech blogger DCRainmaker using an AppleTV to Zwift the vast majority of the time. From his article here, this quote:

Many regular readers know that I’m a big user of Apple TV for Zwift. For the most part, unless I’m actively testing something that requires a PC or Mac specifically, I’m using Apple TV as my Zwift machine. I have multiple units at both the DCR Cave and at home, for both Zwift cycling and Zwift running. It’s easy to use, and in my experience generally far more stable than Zwift’s PC or Mac versions.

What ATV lacks in graphic detail it makes up for in convenience and tidiness. Get the latest 2022 4K version as it’s due for some graphic upgrades next year that previous models won’t get. Try it for a week or three and take advantage of Apple’s return policy if you decide you don’t like it.

Stay on top of forum updates - about once a year, there’s a game-breaking bug that may crash the app. (latest was the 20 screenshot limit that unceremoniously terminated the game)

It doesn’t get much cleaner this this - no keyboard, no desk, no mouse required: 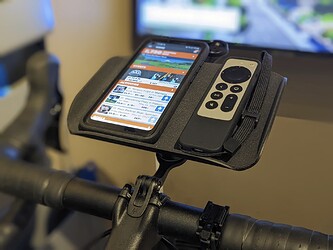 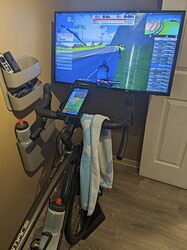 This will seem a bit odd but bear with me here. Everyone has different living arrangements, and even if you have the same model of home, you’ve probably configured your pain-cave/wattage-cottage differently. I get a lot of new ideas seeing how people have adapted living spaces to accommodate Zwift…

EDIT - the ATV4K renders menus and the HUD in 4K natively which makes them sharp and easy to read. The world graphics are 1080p but it’s intellectually dishonest to say the ATV “only renders in 1080p.”

I thought you were in China since you mentioned users in China saying your error was related to the great firewall.

In any case, you can try:

Does your laptop connect normally to the internet (Netflix, YouTube, ESPN, etc…)?

He already tried google DNS and tethering. If VPN works, then using some other WiFi network (eg, at a coffee shop) might as well. But since tethering apparently didn’t help, it’s hard to put much faith in that option. Unless the tethering didn’t really work and it continued to use his regular WiFi network for some reason.

I think I might just bite the bullet and buy an Apple TV 4K.

A number of forum users love Zwift on ATV. Ignore them.

What a silly thing to say.

Yes, when I googled that error message it seemed related to those issues.

It’s a fully functioning internet connected device. There’s no reason why that device shouldn’t be able to connect to any service or website. Others on the network are fine.

It’s really puzzling. If it was Windows I’d probably start hacking the registry to delete any mention of Zwift but I’m less familiar with Mac. I was told to use Terminal to remove a few folders and .plist files (whatever they are) but that made no difference.

Thanks @Otto_Destruct . I looked at slightly older models on Ebay but think I’ll get a new one. Your point has confirmed it.

That’s a great bar extension for the phone and remote. I’ve had my iPhone on the stem but of course its getting soaked in my sweat

Nobody asked but here’s my personal opinion on using Apple TV to run Zwift. If this constitutes ‘hate’ then my definition of the word differs to yours. What I dislike and regularly call out is the misinformation and nonsense that follows ATV around for some reason. For example claiming it’s ‘far more stable’ than other platforms whilst also saying there are regular game-breaking bugs that can crash the game. Oh, and yes I have owned one.

*For a brand new device with warranty etc
**Versus alternatives, considering the limitations and what you actually get

‘It just works’ is not on the Pros list because it’s meant to just work. My dedicated PC just works, as did my non-gaming laptop. Turn on, start game, ride, close game, shut down. Tons of setups ‘just work’, it doesn’t make them magic or special. If it doesn’t ‘just work’ then you shouldn’t be paying money to Zwift. Compare it to what else you could spend money (and time/effort) on, NOT whatever evidently unsuitable device you’re struggling with now.

Another pro: automatic app updates that don’t interrupt the user when starting the game

Another con: slower release of app updates due to Apple’s global publishing delays (same for iOS/iPad). This only really hurts when waiting for a critical patch.

I didn’t list the automatic updates thing because it can be argued as both a Pro (doesn’t interrupt you) and a Con (can prolong bugs, cause issues and/or delay access to new features). Ultimately if you have to manually check for updates, then it eliminates itself as a point of convenience. Same as knowing/having to force close the app every time. It’s a quirk of the platform.

That’s a good write up @Dave_ZPCMR Some points I was aware of, some I wasn’t. None of the Cons are deal breakers though - 1080, 30 FPS, are fine for the old TV that I will connect it to in the converted shed, where I’ll be using it. This is to keep me riding in the winter and help train for a big ride in the Alps next summer.

My wife’s Apple laptop was supposed to be the quick and easy (as well as free as we already owned it) option. But it didn’t work, having spent several hours changing lots of network settings that shouldn’t be needed. Its a perfectly functional device that is used for many, many, internet connected apps and services.

I have a desktop compute but that’s not where I want to do indoor training.

I can’t really think of any viable alternatives. The Apple TV would seem to be the next best option.

The only other one I considered was cancelling my membership and signing up for the Wahoo System/RGT. I don’t think this is the place to comment on that further though

I can’t really think of any viable alternatives.

The integrated graphics on just about any Intel-based desktop Windows PC from the last decade will produce the same results as Apple TV 4K without any of the limitations, and an upgrade path - for half the cost or less. Tons of suitable systems on eBay for under £60, depending on how much freedom in future you want. £150 will get you Ultra graphics at 1440p60 and a completely different experience. But all this requires some effort to set up, and isn’t as small etc. Up to you.

The integrated graphics on just about any Intel-based desktop Windows PC from the last decade will produce the same results as Apple TV 4K without any of the limitations, and an upgrade path - for half the cost or less. Tons of suitable systems on eBay for under £60, depending on how much freedom in future you want. £150 will get you Ultra graphics at 1440p60 and a completely different experience. But all this requires some effort to set up, and isn’t as small etc. Up to you.

Yeah, I guess so. Big and complex though, as you mentioned. ATV is small and already being part of the Apple ecosystem (iPhone, iCloud account etc.) should be easier. Thanks for the thoughts though, I didn’t think you get a PC for that little money these days, I tend to only look at laptops or gaming or professional grade PCs that are much expensive. Even an Intel NUC, which is similar size, is £400

A pity there isn’t better integration for Zwift for Linux or Android systems.