Hi, trying to set up my zwift, and realising there are a whole host of things to consider!

I’ve got an Apple TV 4K on order and have a 32inch 720p TV to display. Wondering if I would be much better off with 1080p TV or if there is little difference? (The TV is wall mounted right in front on the bike).

Depends how you’re defining ‘difference’. It won’t change how the game runs or looks. The HUD will be in native resolution, so it may look a bit sharper. However if you go to a higher resolution display in a larger size and keep the viewing distance the same or less, it may not actually be any clearer anyway.

Thanks, to clarify, I meant getting a 32” 1080p TV as opposed to current 32” 720p TV. But if negligible improvement in picture I won’t bother. What do you think?

Dave, you are clearly the expert in all this! Many thanks

The HUD will look a fair bit sharper, and since you’d have more pixels at the same size the game itself will probably look nicer. It doesn’t change the actual render resolution of the game, the details/features you see, or the frame rate. If you were going to spend brass on it, you might as well get something bigger. That would be worthwhile for the increased immersion, but that’s it.

I brought the ATV4k to BestBuy and hooked it up to three 32” Samsung OLED TVs that only differed in resolution - 1080, 1440, 4k. Side-by-side, there was a noticeable difference in HUD sharpness when pixel-peeping. I bought the 4K.

I would strongly suggest buying the highest resolution TV you can afford, even if using an ATV4K. Regardless of improvements (or not) to resolution in future ATV updates, you may want to hook up a PC at some point and take advantage of higher resolution. If you can’t afford at least 1440P right now, hold off and use the 720P until you can.

FWIW, I have a much larger 4K TV in the living room. 32" is perfect, wall mounted on an articulated arm about 2-feet in front of my bike in the pain-cave. 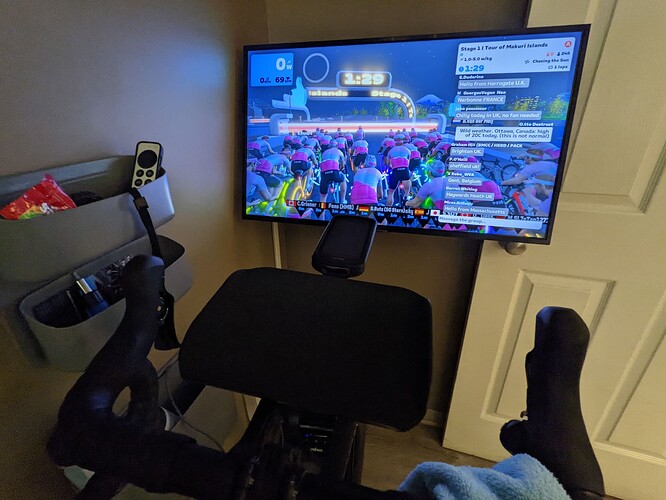 I had a 32” HD TV and upgraded to a 43” 4K TV for virtual cycling. The 4K is much nicer and clearer. I’m also using to 2022 Apple TV and it’s a nice setup. I had the original Apple TV that rendered in 720p, and the 4K looks much nicer. I view it as a “game”, so I’m not worried about ultra realism, your mileage may vary.

Thanks CJ, just bought the 720p TV so hopefully the shop will let me exchange for higher res.