Tour deZwift, no way of telling who you are?

Tour de Zwift, no way of telling who you are!

As many of the rides have high participation, its difficult to tell who/where you are in the peloton. I know its a first world problem but at the least rider initial on the back of the jersey or maybe a random animal symbol, just something to tell us apart.

I sometimes wonder if the zwift programmers ride and look at the event from the rider experience, that’s an oversight.

Oh there I am with the hat on. 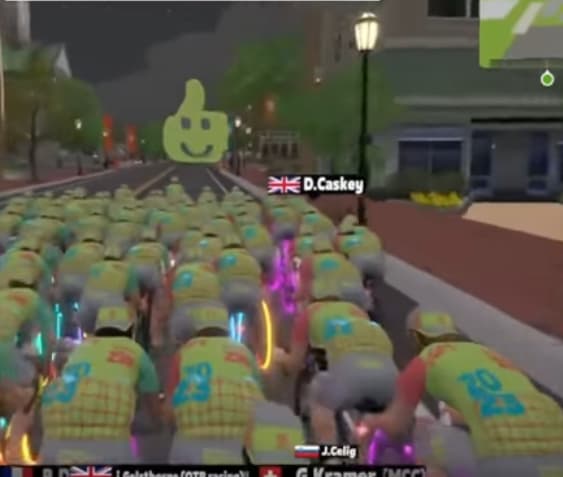 Was thinking that even just not forcing us into the same hat would make a big difference (there are a lot of headgear choices in Zwift).

Hi @K_Marks, welcome to the forums.

You’re the one in the center, or use camera view 3. After a few minutes the groups usually split and reduce in size, it isnt too hard to find yourself then.

My comment was coming from trying to find friends, to be clear, not myself.

I agree cap’s should not be part of the kit. These events should only have the jersey change.

not necessarily if you group behind pace partners - still large groups. then I maybe the guy who wants just a bit of individuality in the game, just a tiny bit maybe

Was riding specifically with another Zwifter, and it was next to impossible to locate each other / figure out if either was ahead or behind any time the group was stretched out.

Three of us just did the C course in Richmond, and it took us most of the whole lead-in lap to find each other and be able to reliably stay together, and that was with us on Discord too.

I “raced” the TdZ stage 2, and found myself looking at the wrong avatar on two occasions, while my real avatar was falling off the back. I used the first-person view going downhill since it made it easier to position.

If we are all going to look the same in these rides, it would be nice if I could turn on/off a “mark me” feature that made my avatar stand out somehow from the crowd.

Didn’t we used to have a thing where your avatar sat up when it was in a group?

The Tron. Have to use the Tron…

That’s it. Knew there was something.

With the Tron, your avatar doesn’t sit up when in the draft. On other bikes, it does.

best approach i find if you want to ride together is hold back a minute out the pen to let the crazies get away.

But how do the crazies find each other?

that’s right the crazies have paid their money too so why should they compromise on the ride experience due to game shortcomings.

Yesterday I noticed the big watt dude who got the aqueduct kom, yep he don’t even get his jersey, he’s cloned to sameness as well.

I did the TdZ A ride at 14:00 GMT today. On my way up the hill, a rider with a black jersey (and some sort of logo) came past the small group I was in. That was the only non-TdZ adorned rider I saw. Is there some sort of special club I’m not aware of?

Could they have started the event and then quit. I would have thought they would no longer be visible but perhaps you do.

you and your friends could always choose a different colour Tron

I received it after the Finnish 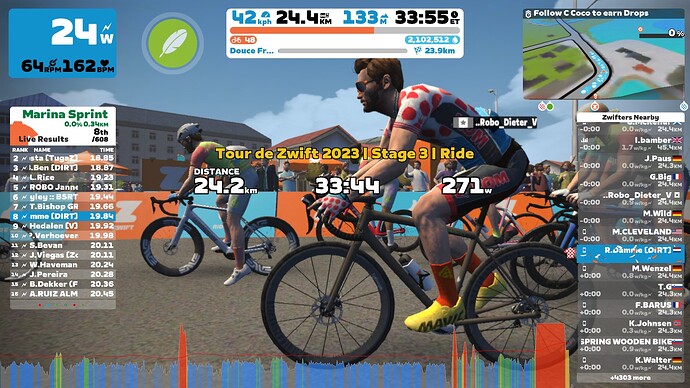