Ramp Test not so trustworthy

Ramp Test doesn’t seem so trustworthy: today, at the end of a very productive season, I got four points less FTP compared to the ramp test I did on March 30th, while I was coming from few upkeep training sessions during winter.
Furthermore, all the data, regarding average watts, distance and time are a little better in my recent test: exactly the one that gave me a lower FTP. 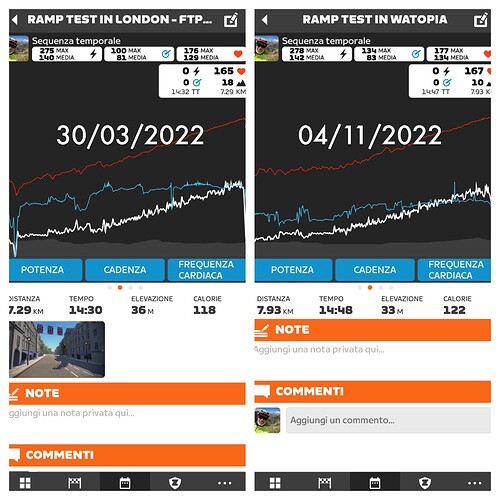 The ramp test is a very crude (inaccurate) way of estimating your FTP. The full FTP test (or shorter) is more accurate, but is harder to pace.

Plus there are lots of factors that could skew a result anyway, e.g. slight illness, how rested you are, your nutrition and hydration, etc

Your power was up a little on the latest test, but so was your HR. I wonder if that has something to do with it. FTP is a way of measuring a somewhat nebulous concept of ‘threshold’–the point where, when you stay below it you are efficient, and when you go above it you blow up

So if the test showed that you reached a higher wattage, but that you were stressing yourself more to do it (higher HR), it (the test) conceivably might not conclude that you have a higher threshold. Just an educated guess, the math behind these things is complex and possibly even proprietary

But that’s the only thing I can see that might explain it.

EDIT: Also keep in mind that a threshold number itself is somewhat hazy. If it says you have an FTP of 200, and you average 201 for a long ride, are you absolutely certainly going to blow up? And if you average 199 you’ll be fine? There’s going to be some variance. I think these ramp tests need to some with some kind of error margin indicator. “Your FTP is X, +/-2%”.

the math behind these things is complex and possibly even proprietary

It’s really not. It takes 75% of the last ramp that you completed. Unless I’m missing your point?

But that is highly skewed towards people who have good 1-minute power, so it’s a terrible way to estimate your theoretical 60 minute power.

The fault appears not to be with Zwift.

Well, that proprietary part was a joke

But FTP tests that only take wattage into account are estimates of FTP. I was wondering above if they are taking HR (and thereby some measure of your effort) into account and thereby trying for a more accurate number. If they were, then the math would have to be a lot more complex.

If they are just going by wattage (as many do), then they are just shooting for an FTP estimate (with, I’d say, a pretty wide error margin), and someone shouldn’t feel bad about their number going up or down by a couple of watts.

But if they are just using that wattage number, that doesn’t explain why a higher wattage performance from the OP would yield a lower FTP number.

EDIT: saw the posts about the last minute–that in fact would explain it. (And as also said above, is why these tests should be taken with heavy grains of salt.)

EDIT: saw the posts about the last minute–that in fact would explain it. (And as also said above, is why these tests should be taken with heavy grains of salt.)

Not all ramp tests are created equal. I know the TrainerRoad one has some additional “stuff” going on to catch if, for example, you try to game the last minute by ramping up the power right at the end.

They all share the same flaw, however, in that they’re designed to determine your maximal aerobic power and then apply a (more or less) arbitrary %age to it to give you an “FTP.”

While this very usually* gives you a good benchmark for future workouts where basing that training off FTP makes sense (ie theshold and below) it’s far removed from being an actual measure of your power at lactate threshold.

*exceptions apply. The 75% is Good Enough for the middle of the bell curve, and hence most people. If your physiology puts you at the edges, the FTP derived from a ramp test could be significantly high or low.

Agreed. I remember sitting on a trainer, sweating and swearing and getting finger pricks every minute and thinking “But at least I’ll get better data than a ramp test!”

For the OP, I think the main point might be to not be too worried about a couple of points drop in a vague estimate.

Your Ramp Test’s estimate of FTP is based on when you fail the test. If you failed at roughly the same spot, you’ll have roughly the same FTP estimate. It looks like it was on a different road, so the distance won’t match up.

I don’t believe there is any HR component to the calculation.

There is no HR component to the Zwift Ramp Test, you don’t even need an HR monitor to take the test. It is really just the average of your last minute’s power multiplied by .75. The total average power doesn’t matter, just the last minute’s average power, the test text actually mentions this a few times during the test.

There is a range that Zwift could have chosen to use as the scaling factor because this scale is not the same for all people, they chose 75%. For me personally the ramp test over inflates my FTP and I find my FTP is closer to 72% of the last 1-minute power as an example.

The 20 min test is (as others have mentioned) more accurate, but it is much harder to do properly especially if you don’t roughly already know your FTP because it’s hard to pace a 20 minute effort well without some experience.

today, at the end of a very productive season

Would you mind quantifying what makes a very productive season ?