Over Gamification of 2wift

No-one can. The route doesn’t exist in game yet. I can’t even put events on it.

No Flames on the ZRL broadcast today, was hoping for some fireworks. LOL

I saw a few comments while I was riding this evening from people asking what it was and how to do it.

I fear most people aren’t that active here and so have no idea why there is fire on the roads and will likely just confuse riders. Maybe there could be something on the companion app explaining?

Have to admit, I wasn’t aware of the fire flames update and the first time I saw it assumed it was a Zwift bug or that my eyes were playing tricks on me since I was delirious during the race. The second time I saw the fire trail I knew it was intentional then. I was wondering if it had something to do with the fire socks, but I guess not.

I have to say this looked cool: 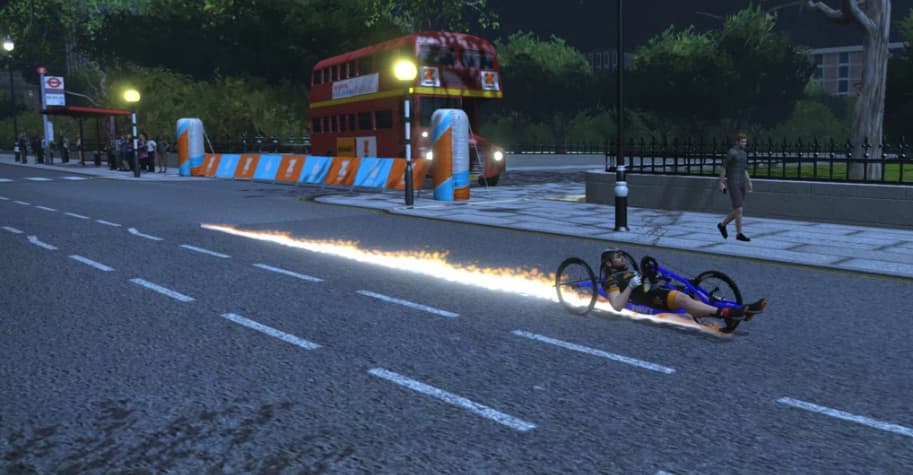 One of the silliest forms of gamification is loading complexity into the workouts simply to give the rider some entertainment. Aerobic conditioning with 20 tempo changes in an hour? It would be no less effective with 5, and skip the useless cooldowns.

I think it’s quite fun, I’m a huge fan of the flame socks effect personally!

And the costumes, are hilarious!

Perhaps there’s an option ZHQ could produce; allow these people looking for some “hardcore” experience the ability to disable these “silly” additions.

Meanwhile, the rest of us enjoy having just as much fun as we can; that’s why we’re doing it… right?

Downside I see to the flame socks in things like the WTRL races is it absolutely gives away your sprint timing, which for some… might be the difference between a win and a loss! Saw plenty of it in CatB though… not that it mattered; I couldn’t keep up with them anyway

I have a feeling this will be an unpopular opinion but in one way I’d like to see things more gamified.

With bike / wheel attributes. I know there’s complex physics in all of these calculations, but I feel like the way it’s set up now leads to 99% of people using the same bike because nobody wants to be disadvantaged. What if every 3 star aero bike had the same aero values in-game, so that people could actually have some fun in choosing bikes and then we could see some variety, rather than everyone forced into the same thing as everyone else?

I realize that is never going to happen, and also that it’s less realistic (and I guess it might affect the whole level-up rewards system), but I’m so tired of seeing a thousand Tron bikes everywhere.

I love the fire socks. I can see why some people would prefer not to have them (Zwift r srs bsns after all).

A client-side option to hide the effect would be the best solution.

I love the idea of the fire socks - a while back I had suggested an unlockable hairstyle or helmet that would put your hair on fire during the top end of your sprint, so this is pretty similar. I haven’t seen it in practice yet since I haven’t done a race since it released, if it shows up all the time I can see why it might bother folks. But yeah, if they had a setting to remove gaming elements client side that would work just fine.

It looks like the 1999 hot wheels PlayStation game…especially when you have 10+ people spitting flames in a peloton during a ZRL race.

I don’t mind the attributes being varied and in the past I’ve gotten into it with a former Zwift employee that curated the bikes to his desired portfolio rather than mirroring their IRL attributes. I would rather stay away from keeping the bikes from the Fortnite/RGT model of making them skins that don’t have any benefits.

they should add the longteng LTK118 or the hongfu fm066 to zwift. they already have ribble so they might as well

as long as it includes the ride on thumb i’m in!

That’s almost exactly the opposite of what I was after!