Completed La Reine but no badge

Did you inadvertently make a turn?
Are you sure you completed the full route?
Were you logged into multiple devices?

It’s not a course where issues have been reported previously.

No turns. Went through the blue barrier. Got the photo when I crossed the line but no badge

When you say “blue barrier” do you mean you saw the blue Route Completion banner at the bottom of the screen?
La Reine ends at an arch and I think it’s orange or green or mixed colors.

No, it was a sort of hologram banner.
Didn’t see an arch.

This makes it sound like it was an event that may have had a finish line that differed from the route finish. Without seeing more details it would be hard to guess what happened.

Confusing. After the banner got the graphics with the route-name, distance, time and watts, just no badge.

Do you see a snapshot like this in the Companion app for the activity? Distance about the same as you see here? 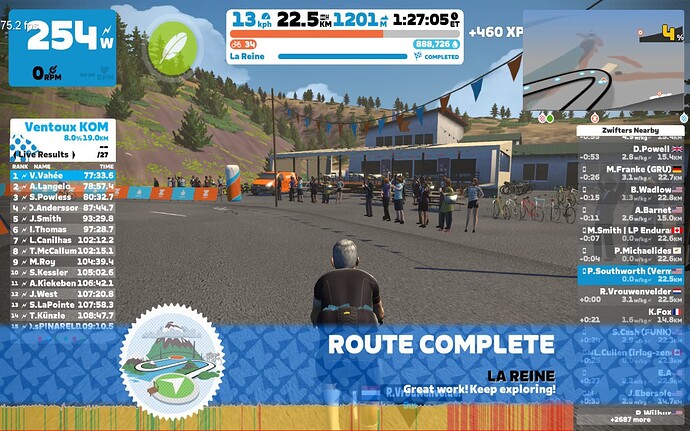 Hey Peter. Can you link to your activity? I think I found you on the Companion App and the timing tracks (La Reine route, just before you posted this thread) 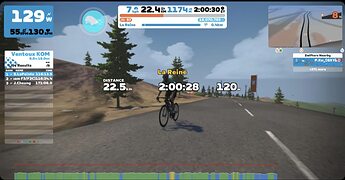 Worth noting: the route I see in what I believe is your log (above) makes it look like you completed an event called “La Reine”. The log entry doesn’t show the completion badge.

Peeping the map, it looks like you may have stopped just shy of the end of the route. 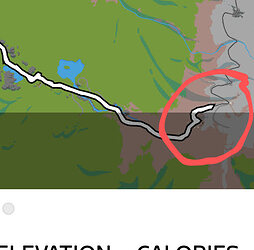 First route image is yours, second is from Zwift Insider’s La Reine map.

FYI: you can create a Meetup/Event that follows a route but also edit the EVENT distance to end before the end of the route. (I just tested this) This would result in exactly the behaviour we’re seeing in the ride discussed here. (and explain the 0.4km left en-route when the “event end” text pops up)

That auto-pic from the activity was generated at the same distance to the end of that route as my recent ride where I had my first/only instance of a fuzzy pic which I noted in this thread. Pic might be a bit difficult to decipher but it shows .4km remaining for route… … 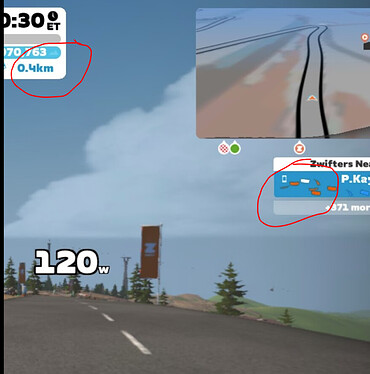 … which in turn would naturally suggest to someone that the route is done and time to turn around …ouch!

I set up the ride as a club event, and I think I might have jiggled the distance by mistake.
Guess I know what I’m doing first thing tomorrow!
Thanks all for the input. Ride on!

Ah that makes sense. Leaves my 0.4km to go photo a mystery then

I completed La Reine last night as stage 3 in 2023 Tour de Zwift, and did not receive route badge… I actually went about half a km beyond the finish arch, and I did get credit for completing stage 3, just no badge… Especially frustrating considering the route’s level of difficulty.

Please contact support. They should be able to add the badge for you.