In game messages and ride ons

Hi folks
Can anyone explain why on my first 3 days on zwift I can message live while riding and I was receiving ride ons, and one day it all stopped
I get no ride ons and my messages do not show up to the left of my name. Everything else works.
I’m using my iPhone

for the Zwift companion
And iPad for the game!!! Hummmmm. On my iPhone all the data works it navigates ok

Your account appears to be under review by Zwift for some reason and in the past, that causes your avatar to be virtually blind to all other Zwifters even though you can see them. To me, your rider’s name is “J Watopian in Review” which I have seen when a rider’s data is not quite right and Zwift are monitoring a user’s account.

Given the anomaly with your data in your recent post, I’d say Zwift are also monitoring your account for a period. I’d suggest you contact Zwift support who should be able to discuss this further with you.

FYI, here is what I see on your profile, but your correct rider name is on your activities 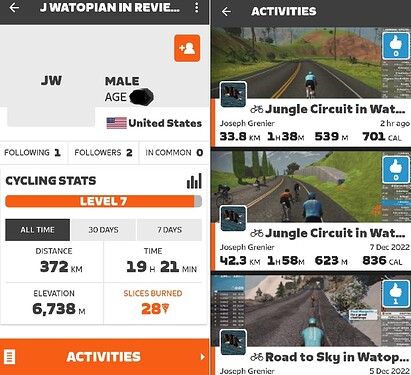 Is this the “shadow ban” process @Dean ? If so, i’ve seen Zwift implementing that an awful lot lately for use of foul language in the game. Is that a possibility @Joseph_Grenier ?Zwift has reduced tolerance lately for language.

They do publish their terms of service at Terms of Service so you may want to scan that and see if you’ve broken any of those.

You can query directly with Zwift customer support but in my experience it may take some time to hear back from them (if at all).

They have/had a dedicated “content mediation team” but that may have gone/been reduced in their staff cuts.

I have seen it used for people using ANT or BT BOTs to build up XP/levels, and a bunch with blatant fudging of data streams so just assumed Zwift have some scripts running to check for a few patterns. They certainly could deploy it for language infractions. Joseph’s rides seem completely normal though apart from his profile data not stacking up with his ride data (which is not entirely unusual.

Slightly off-topic but by weird coincidence, its strange you mention the data stream/hack possibility - it wasn’t even something I was aware of until yesterday when I read Astounding Data Stream Hack Gets UCI World Championship Qualifier Banned | DC Rainmaker - pretty astounding stuff, there’s some smart people out there! I knew about the AI/BOT stuff for levelling up ever since Cameron Jeffers got caught for it, and obviously knew people fudge their weight to improve w/kg. But the idea that people had gone to the lengths (and were smart enough) to build special hardware to fudge the data just blew my mind - seems like a staggering amount of effort to go to for really minimal gain/reward even if you’re happy with it on ethical grounds etc…

Anyway, will wait to hear from the original poster if he has any more input on the possible issue.

I remember being astounded to learn that there are age grouper triathletes using PEDs to improve performance on local 100-entrant sprint triathlons. I could almost understand someone who used them just because they wanted to ride faster, fight off aging, etc. But there are actually people using them to try to get on an AG podium in front of 10 other local age groupers. So perverse. And no less perverse to see it happening on Zwift. Even with digital PEDs, how many of the same people are also on normal PEDs? Probably a few. So strange.

I knew about the AI/BOT stuff for levelling up ever since Cameron Jeffers got caught for it, and obviously knew people fudge their weight to improve w/kg. But the idea that people had gone to the lengths (and were smart enough) to build special hardware to fudge the data just blew my mind - seems like a staggering amount of effort to go to for really minimal gain/reward even if you’re happy with it on ethical grounds etc…

It’s just farcical that these elite level riders need to go to those levels. I’m smashed up to heck this year with injury and I’ve still managed to get up to level 59.

Never ever do I use any exploits on Zwift. I won’t even do workout mode on ADZ.

remember being astounded to learn that there are age grouper triathletes using PEDs to improve performance on local 100-entrant sprint triathlons.

I’m sure you knew about what happened at Haute Route Alps this year. I’m sure Fergus Grant was tearing out his hair over that.

Haute Route is getting very competitive at the top these days.

Actually I hadn’t heard about the Haut Route thing, just looked it up. Not at all surprising, given that I’ve watched Icarus. I assume many of those people are juiced.

assume many of those people are juiced.

Not that often. A lot of them are just awesome riders or national level pro riders. But it happens and you will get caught if you try it.

Just makes it more crazy why people try that stuff.

I won’t even do workout mode on ADZ.

What’s wrong with doing workouts on AdZ? Not that I do (I almost always stick to the flats since I’m too heavy to make a good climber) and I like the “feeling” of whizzing along more than grinding it out uphill) - but I don’t understand, does that give you some advantage I’m missing?? Apologies if I’m being a bit thick here, how is workouts on AdZ cheating? Am I misunderstanding?

If I’m doing ADZ then I should be dealing with the gradients and the 14% sections where they are and shifting gears. It’s part of the fun of it.

Just going in workout mode totally detached from the actual gradients is not for me and I will never do it.

Doing 1-2 laps of ADZ daily at the start of this year gave me great fitness, but it was sadly lost due to a crash.

For the topic starter definitely reach out to Zwift Support. If your rides are all real and you aren’t saying bad things in the chat then it seems odd you’d be in review.

One thing on the chat, it’s best to say very little these days. Even just friendly chat among friends gets someone telling everyone to be quiet. Or use WhatsApp to chat privately. The group I ride with does that.

One thing on the chat, it’s best to say very little these days. Even just friendly chat among friends gets someone telling everyone to be quiet. Or use WhatsApp to chat privately. The group I ride with does that.

I’ve noticed this too, I’ve had several people tell me to shut up because I’m using chat to… chat. It baffles me, especially since you can turn chat off if you don’t want to. For me personalyl I enjoy it and it makes the time pass.

thank you for your input
I did tell an off color joke definitely that was why.
Joseph Jody Grenier

I would be happy if Zwift would get rid of the toast, nice, hammer time, and ride-on buttons from the companion app. They serve no purpose other than to annoy everyone in a group when people tap them again and again and again and… Use of them is truly worthy of people telling them to shut up.

Totally agree on this. The worst is when noobs think that the thumb gives Ride On’s.
I might have been guilty of this once or twice when I was NOOB.

In their defence it is easy to see why they might!

Agree. I know it took me a few rides to figure it out!

Please delete these buttons: bell toast hammer smilie face handwave elbow?! (which seems to appear inconsistently anyway) …because they’re just noisemakers (which most people don’t hear anyway since we’ve muted the app and listen to Spotify), or take up valuable space. The idea of SCROLLING to f…

The companion app hasn’t changed in form or functionality in as long as I have been on zwift (aside from adding the workout screen thousands of years ago now).

It is in desperate need of updating.
It could solve the gradient graph disaster in game by having it on the companion app - it doesn’t even give you the current gradient anywhere - not even a number!
The dashboard is a pointless waste of time and people have asked for customisation since time began.

Because its paired with other problems like the lack of customisation of which sounds you want to hear (there’s only two “channels” covering everything from vocal ride-ons, to tyre noise, to babbling streams) as well as the inability to tell who triggered a specific vocal in-game sound, it means that if people sit and spam “ride on” then (a) you can’t tell who is doing it and report them and (b) you can’t remove the sound without silencing the entire game. Its absurd.

is honestly like something out of a Benny Hill sketch. Its surely some kind of practical joke its so abstruse, its farcical.