If I'm pushing 210 watts, in the Yellow, how can the Blue PP group pass me?

Weird, noticed it tonight. Trucking along, safely in the yellow, and a group passes me. It’s the Blue pace partner group! How?

Isn’t Blue easier than Yellow? If that’s true, why is the Blue group passing me when I’m inYellow? Is it the trainer I’m using? Is it the computer I’m using? Am I just having a bad day? And I mean they PASSED me, I couldn’t even keep up.

Am I missing something?

Isn’t Blue easier than Yellow? I

Nope - colour coded like ZP/Race Cats - yellow D, Blue C, Green B and Black or Red faster than I care to think about.

It also depends on the size of the group. Seen Genie group overtake Constance (A grade).

Naturally there was a lot of banter telling “slow A-grade” to move over.

A grade was a smaller group and I think the Genie group had a lot of heavy-hitters at the front towing it along faster than it should normally go.

Hmm… But in the ‘worm’ along the bottom of the ride screen, Yellow is ‘higher’ than Blue, so I assumed that the Blue (man) group was riding that lower wattage zone, and my riding Yellow (more watts) would be passing them. Hmm…

But in the ‘worm’ along the bottom of the ride screen, Yellow is ‘higher’ than Blue

Doesn’t that kind of defeat the idea of the Pace Partner Group Ride idea?

They can only push the overall pace so far before they detach and go off the front. For the Blue Watopia bot doing advertised 2.8 or 2/9w/kg avg at the moment, people seem to be able to ride around 3.1 - 3.2w/kg at the front, which drags everyone along in a the draft, including the bot. Any faster and the people out the front take off.

Have a search for a thread on PD4 (pace dynamics) which Zwift are trialling at the mo - it’s likely to tidy this effect up a bit.

No wonder I was dropped from a few PP rides then. It was like the whole group just jumped on it and I was dropped. Wrong gear, but really tried once to catch up, and they were just gone. So I guess it really does happen. Makes it too realistic!

I am having same issue… all the time very frustrate

So it’s ‘my’ power zones? But the Blue is lower, and they pass someone ripping along in Yellow? I thought it kind of discouraging. Imagine driving at 80MPH and being passed by someone doing 60. Well, you couldn’t unless their speedo was really off. People are good with this, or is it linked to my trainer (like I thought) or linked to something else. Not grokking this…

That’s right - Dean also explained it well. If the bot is doing 3.8w/kg, you can get people pushing a bit more watts/kg then towing the bot along faster.

This makes it bad for people at the back if they aren’t watching, they get dropped very quickly or they have to push 5w/kg to get back.

No wonder I was dropped from a few PP rides then. It was like the whole group just jumped on it and I was dropped. Wrong gear, but really tried once to catch up, and they were just gone. So I guess it really does happen. Makes it too realistic!

In the old days of Anquetil bot (when pace partners were steady 4.2w/kg) some of the people would do this to drop someone who was just sitting at the back all the time in the jungle (especially near the wooden bridge).

The gap would open up very fast and they’d have to push huge power for a long time to get back or just accept they were dropped.

I’ve been dropped on zone 3 PP rides. Like hard dropped. It’s why I stopped doing them for a while.

Sometimes I’ve said to front to ease off a bit because I could see people at the back getting dropped.

I understand what you are saying because I don’t have a lot of power either because of my injuries so I can’t just easily punch 6w/kg to close sudden gaps.

Previously I could just close the gaps up easily but it’s much harder now.

You have Yumi bot on Tempus doing 41.5km/h average speed at the moment over 15.22km

It all depends how much the group is pushing and how many people are there.

The worm? What worm are you talking about? The red line above the power graph?

This shows your HR. The colored graph is your actual power output, so the watts you are currently producing. From grey to blue to green to yellow to orange to red. Do a sprint over 8.0wkg, your wkg on the riders list will be displayed in orange and the power graph will show a spike in red and your HR red line should then go up too.

Pace Partner’s color has nothing to do with your actual power. That’s why it’s not power used but wkg. It’s simply a color code, yellow for D, blue for C, green for B and red for A.
What is yellow for you according to your own power output, might be green for someone else, and red for another someone else…

Imagine driving at 80MPH and being passed by someone doing 60.

You have to think of it more in terms of fuel mileage. If you are following behind a large truck at X mph you will get better fuel mileage than if you were driving the same stretch of road at the same speed with no other vehicles around.

When riding in a group, as long as you are not the lead your power needed to hold the speed will be less than if you are riding the same route at the same speed solo.

My bad. I thought there was a relationship between the power I put out and the w/kg. I was just amazed that a group I thought was supposed to be slower was dropping my workout ride where in intervals I was putting out 2 to 2.75 w/kg. So if it’s meaningless, it throws out what I thought I knew about Zwift and the app. (So I’m not too slow, I’m just too fluffy?)

I would hope that Zwift does more on user education as to what all of this means. Someone else commented their frustrations, so it’s not just me. W/kg just seems somewhat arbitrary. So if a rider that can put out 250 watts loses 20 pounds their w/kg goes up yet they can’t put out any more watts. Does that make them faster? Sorry for my ignorance. And maybe at my age I shouldn’t care. shrug

Sure, I get it. Drafting. But what does that have to do with w/kg and a group passing me? I’m trying to understand it. I’m too fluffy… If I lose weight, I am able to go faster? Okay… So in the meantime I should just ride with my group. Okay.

So what purpose does doing an FTP test accomplish? If I come out with a 300 watt FTP, I am still slow because of my weight. Is watt output related to speed?

Is there another offsite place that explains all this? I don’t want to drag this out if no one else is having the same issue conceptualize this issue.

So if a rider that can put out 250 watts loses 20 pounds their w/kg goes up yet they can’t put out any more watts. Does that make them faster?

Yes. Weight is one of the big things that makes you slower, especially going up hill. On flat roads weight play a roll in rolling resistance.

Drafting. But what does that have to do with w/kg and a group passing me?

In a big group there is less Drag so people sitting in the group need less Power go at the same speed as a single rider.

I am still slow because of my weight. Is watt output related to speed?

Yes watt has a relation to speed, it is a lot more pronounced on a perfectly flat road where pure watt will give higher speed. For the same weight more Power will result in more speed. 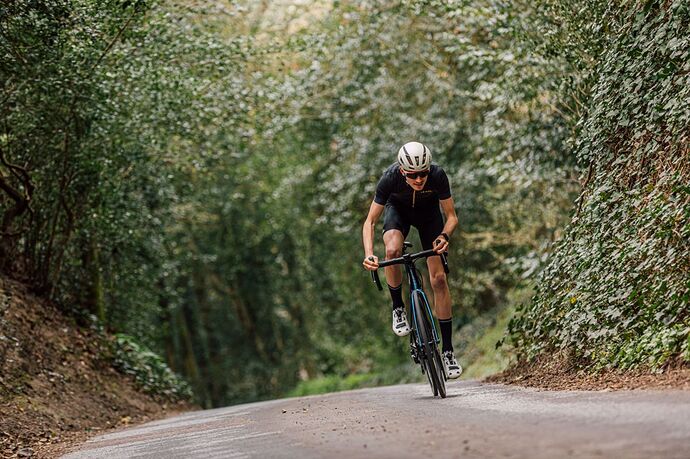 Power to weight ratio: watts per kilogram explained and how to boost yours

Unless you only ever ride on pancake-flat surfaces, improving your power-to-weight ratio is a must

Power-to-Weight Ratio for Cyclists: When Watts/kg Matters, and How to Improve...

Power-to-weight ratio is one of the most important metrics in cycling, but it can also be a negative influence driving athletes to obsess over weight. Learn how it can help make you faster if used correctly.

In addition to all these excellent explanations, weight also has an impact on VO2Max, which is really massive for a cyclist.

About wkg, that’s why in a group workout event we don’t say let’s push 250W because someone 100kilos or someone 50kilos they won’t have the same ability to reach that power output. But with wkg it’s bringing everyone together. But if you calculate, let’s say both of them can produce 3W/kg, one has an output of 300W and the other 150W…
It’s also pretty logical: someone heavier will be able to push “stronger” on the pedals just by gravity

And that is where the confusion started. I rode a Peloton for years, and was in their various online groups and they pushed watts over anything else. Which I guess was easier than having people figure their w/kg. So pulling huge watts was the sole focus, and then someone started talking w/kg, which distorted the whole discussion. People fractured over that concept with some saying it didn’t matter.

On a static ‘dumb’ spin bike it likely all comes down to watts more than a device that accurately simulates rides based on some grasp of reality. Granted, a ‘fat person’ on a Peloton could probably push harder, but the whole thing just didn’t make much sense to me. PLUS the fact that people were ‘cooking’ their bikes to put out more watts.

I grew disenchanted with the whole thing based on such wild inaccuracy potential. The ‘watts focus’ stuck with me. Sure I knew about w/kg, but never really dwelt on it that much. I haven’t done an FTP test in years, just thinking that Zwift and TR would suggest an improvement. Those Peloton FB groups are likely long gone, and the new Bike+ ‘auto-calibrates’ at the start of every ride. I don’t think, but don’t know, if the Peloton calculated power took weight into its equation at all. It just seemed so nebulous, ethereal, ‘magic’. The whole ‘power’ concept was so obfuscated on their bike and by their instructors. Most said they bikes had a power meter, but they actually didn’t. So I left the verdant fields of Pelton and hopped on a real trainer with real power and here I am, still finding my way in the dark, but reaching enlightenment.

Thanks for tolerating my ignorance. Looks like I need to lose some weight…