Group rides based on average speed not power

I’d like to see ZWIFT offer group rides based on average speed and not w/kg. It would be much easier to choose a group ride knowing that the average speed would be something I’m comfortable with. All too often I choose a group ride advertised at say 2.0 - 2.5 w/kg and I find myself shot out the back and never able to real in the main blob. I weigh 70Kg and 2.5 w/Kg for me is much slower than someone heaver riding at the same w/Kg. Whereas if the ride was advertised to be 20 mph/ 30 kph and I know I can average that speed I would be able to stay with the group.

Ride organizers are able to advertise categories based on speed. You can search for them on the ZwiftHacks events site by clicking on the Ranges tab and using the slider to set a speed value. However many organizers don’t set categories this way, so it will reduce the number of events you see in the results. It only really makes sense when talking about speed on flat terrain, so on some routes it won’t have much meaning.

An example of one I did yesterday where the lead actively targets a speed during the ride, as described in the event description:

Not exactly common but you get to know who does and doesn’t target speed (+1 for Zwifthacks for searching).

This can only be done on flat roads.

I would not want to ride with a group that holds 30km/h over the climbs .

It could be done for any course where the organizer, leader and/or participant has a past history of doing a group ride over a route, and knowledge of what the typical avg group speed has been to complete the route. While avg speed I don’t think was technically published, another example was the pace-partner led AdZ group rides which targeted specific times to finish for the given distance (which is all that’s needed to calculate avg speed).

So a group ride stating AVR speed of 30km/h can be very different for every leader on a hilly ride.

As can a ride if the leader posts a w/kg as an average. It would be best though if both pieces of info are provided (avg speed and w/kg) – indeed I’m not sure the event set up systems allows a ride without providing wkg info?

As can a ride if the leader posts a w/kg

No w/kg is not an average it is set top and bottom values.

Sorry, don’t know what you mean. Rides have all sorts of ways of being posted. I don’t want to go down this rabbit hole, but sometimes there’s a wkg range (meant to cover different rider weights? vs whatever the leader weighs, or variations in effort base on terrain, or… who knows?). Event descriptions as you’ve noted in the past, are very important.

Sometimes there’s a single wkg listed, so it could be assumed it’s some sort of average, though it could instead mean the leader will try and be a robot and always ride at that wkg. Average speed as an additional data point for a ride description does make sense if the leader is confident it’s accurate and been tested out prior. The good thing about average speed, is if you end your ride at that valuee, even though you may not ride the route the same as others, you’ll all finish the ride at about the same time.

Here’s just 2 rides that happen to be next to each other that just started: 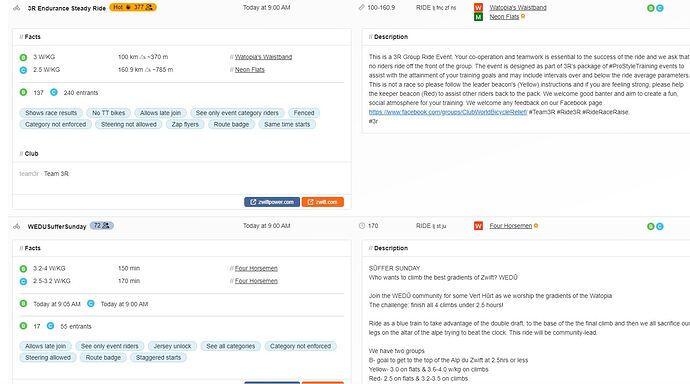 Sometimes there’s a single wkg listed, so it could be assumed it’s some sort of average

No that should be interpreted as a steady pace .

Using average for group rides is just a resepte for disaster.

No that should be interpreted as a steady pace .

and what would you expect the average w/kg of this steady pace to be?

Personally, I have been using targeted kph/mph speeds on my group rides (AsC 3.0) for many years since 2017. It has actually helped to equalised the pace of the participants with a common speed everyone has to achieve together.

It takes a bit of understanding the route and also the approriate speed to hold on each particular segment to reach its maximum effectiveness on group rides. Using w/kg IMO has never been the best on flats as every rider does not have the same FTP, weight and cDA when compared pari pasu.

The other times when I do use w/kg will mostly be on elevated roads especially 2% and above. That is when the w/kg as an efficient ratio does help balance things up on climbs.

It may not be the average speed the OP is targeting but at least the mixed use of speed and w/kg suitable for the category may help achieve the idea average speed at the end of the event.