Make sure you use the Vote button at the top of this topic to give this feature request as many votes as possible.

In 3 Months, it 2 YEARS for this to be given any thought…

I think Zwift and the manufacturers have got themselves backwards with all this.

Zwift already has custom bits for:
Real Road Feeling with the Neo
Steering with the Kickr (and other devices)
Gear Info with the Atom
Custom Button mapping (I think the Kickr?)

Why not just open up the above information to the API’s / Data streams required on the BT communications and then leave it up to the Manufacturers to implement them as they see fit.

That way Zwift keeps it consistent across all devices and its not up to them to keep adding more support, as new devices are released, as at the moment, they are either fire fighting bugs, breaking the home screen or just being Scrooge McDuck getting lost in all that cash

If Zwift would add an API for sending and receiving data and commands, not only the manufacturers would be able to implement something new, it would also open up for the community to create extra functionality.

But Zwift… just keep going ignoring everything and suddenly the community will come up with an open source online riding platform that will…, ah you get it…

ZHQ: Would you guys mind updating us? Is this a planned feature in the near future or not?

To the best of my knowledge this is not something that we are working on currently.

Thanks James, really sad to hear.

What I don’t understand is why not, the bike was sold directly by Zwift and has the ‘Zwift Approved’ sticker as it were, and a couple of years ago there was this big push to get people on to smart bikes for the added ‘smart’ features Zwift would provide - Yet here we are 2 years later we are unable to fully use our bikes with the full feature set provided by Zwift. There are routes which we are unable to even try due to the lack of steering.

Both gear info and steering info are transmitted via the bike (this is confirmed by Stages) with other platforms already unitising this data.
Stages have stated they even signed the memorandum for the steering feature set with Zwift and that isn’t implemented either.

Maybe the number users who have one, who use Zwift is low, but I’m sure we are talking similar numbers to the AtomX, yet that has gear info etc.

What can we do to push / gain visibility to the developers for these missing features. We are not asking for anything new, just access to what other smart bikes on Zwift already have… cheers

Sorry to be the bearer of bad news.

The team are working on some big features at the moment which we hope will make a lot of people very happy. At this stage, on screen gearing for a single bike isn’t a big priority.

I’m definitely not saying that this won’t happen, but at the moment it isn’t high on our list.

(FWIW I will flag your post to our management team)

Don’t bother, they could not get it right anyway.
I’m only one badge away from completing Zwift (Marathon), then I’ll look at other platforms starting with fulgaz which supports SB20 gearing display.

Not the really the news I hoped for @James_Zwift

That being said, it seems to me ( and I’m just a hobbyist programmer ) that Stages almost purposely done what they could to make the gear data transmitted via Bluetooth as hard as possible to integrate into third party apps.
That “could” be the reason for Zwift to prioritize other stuff.
Of course it can be done, Fulgaz shows that but try and run it alongside the Stages app and you’ll see that Fulgaz is relying on some “dirty code” ( or creative code

) to pull that gear information…

For the programming DIY orientated girls and guys there’s a completely undocumented/uncommented stand alone display project on Github, I never managed to get all the way to the bottom, but it might work as inspiration… 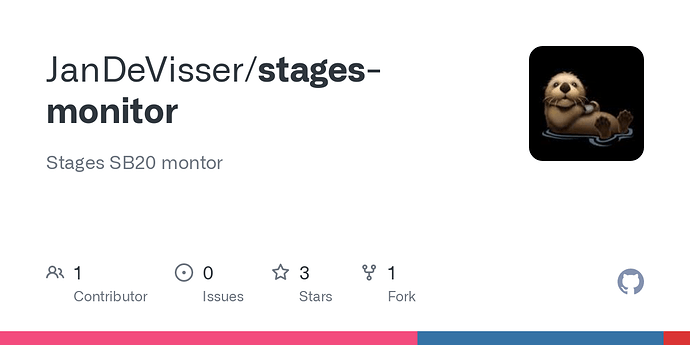 Stages SB20 montor. Contribute to JanDeVisser/stages-monitor development by creating an account on GitHub.

I guess the upcoming v1.31 release is pretty much to the door already - but @James_Zwift and @xflintx: are there any plans to get the gear display for the SB20 implemented? 2 years back I was told that this feature is upcoming and Zwift is working on this, but never heard or read about this.
Route selection with the unused SB20-buttons on intersections would be also cool as well as L-/R-balance, at leat in the fit-file, if not displayed.

Definitely not for 1.31 but I’ll try to revive the discussion.

I’m not sure if we actually receive the gearing information from Stages but I’ll try to confirm later.

It’s in the Bluetooth stream when connected to Zwift, but the format couldn’t be worse

Really enjoying the gear info on FulGaz - so it can work

Would be amazing to see it in Zwift too

@James_Zwift - Also data from the auxiliary buttons too - we could do some steering too!

@James_Zwift
Have you been successful in getting insights and a timeline for a better SB20 integration into Zwift?
The request/ thread was opened about 2.5 yrs back