Hi all. Recently Garmin launched a new firmware update for their HRM Pro chest strap (version 8.8 I believe). I watched DC Rainmakers video about the update (and the launch of the new HRM Pro Plus) and noted that these two straps now broadcast speed.

With it being summer here in the UK I’ve been doing my running outdoors, but tonight I was late getting my run in so opted for the treadmill. So it turns out that thanks to the updated firmware Zwift now recognises the HRM Pro as a speed sensor, so it can be paired to send speed, hr and cadence data to the game. It did require me to calibrate to the treadmill, so will only be as accurate for speed as the treadmill. So not as accurate as the NPE Runn sensor. I still think this is a fantastic update that will simplify the experience of using Zwift and hopefully encourage more people to use Zwift for running as they may well already have all the gear necessary.

How accurate is it?

Does it respond well to changes in speed of the treadmill?
Likewise for Cadence?

I suspect I already know the answer but it will be good to get a users review for others considering this as an option.

Excuse me if this is a daft question. I don’t run on Zwift at the moment.

If you are getting Speed, HR and Cadence from your HRM, what else does Zwift need? I’m wondering if it would be possible to pair the HRM with a phone, then just go run outside (assuming decent 4G coverage) and have the run recorded in Zwift?

If you are going to do that, you might aswell use the Virtual run option on your watch, which will also broadcast speed & HR and is more accurate.

Pair your watch to your phone\zwift and then go for a run outdoors. It kind of works for the Duathlon series as long as you dont press pause or stop by accident on your phone.

It’s only as accurate for speed as the treadmill display as you have to calibrate it to that. But it does respond well to changes in speed and cadence.

I believe you need speed, but cadence and hr not essential. People already run outside with Zwift on their phones using foot pods.

My older farming Fenix 5 plus doesn’t have a virtual run option and doesn’t broadcast speed.

Ah. My Fenix 6 does have a Virtual Run option. I think this means that I can just use that to send Speed, Cadence and HR to Zwift. I’ll have to try it.

I think this means that I can just use that to send Speed, Cadence and HR to Zwift. I’ll have to try it. 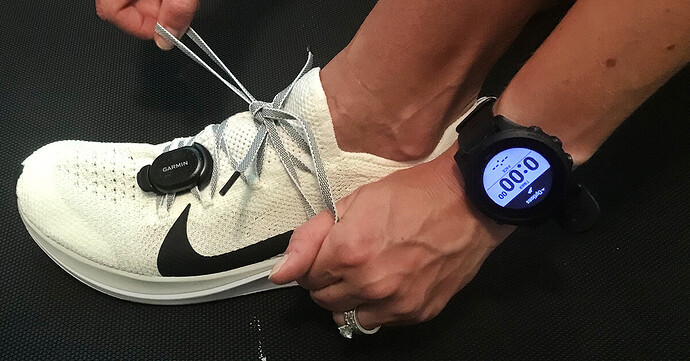 Ive got it all working together. I just got the horizon 7.0at treadmill which broadcasts speed, forerunner 945, and hrm pro+. The best way to get accurate speed is from the treadmill directly. The watch and chest strap will estimate ehat it thinks you are doing based on body movements, but it can be spoofed easy by just swinging your arms faster. Also, if you stop swinging your arms, like when wiping sweat or getting a drink, your cadence will drop out because it doesnt detect your arm movements as “running”.

The chest strap and the watch is really all you need to be running in zwift, though. Ive made it work with just the watch and swinging my arms like im running.

My thing is, i want to use my chest strap as the cadence sensor because the hrmpro+ has power and vertical oscillation and stuff i want to use. I know thats only ant+ stuff that the watch can decrypt, but should i connect the hrm to the watch, then set the watch to read cadence? Ive tried with no clear indication, but when i stop swinging my arms, the cadence drops. The cadence should come from the strap.